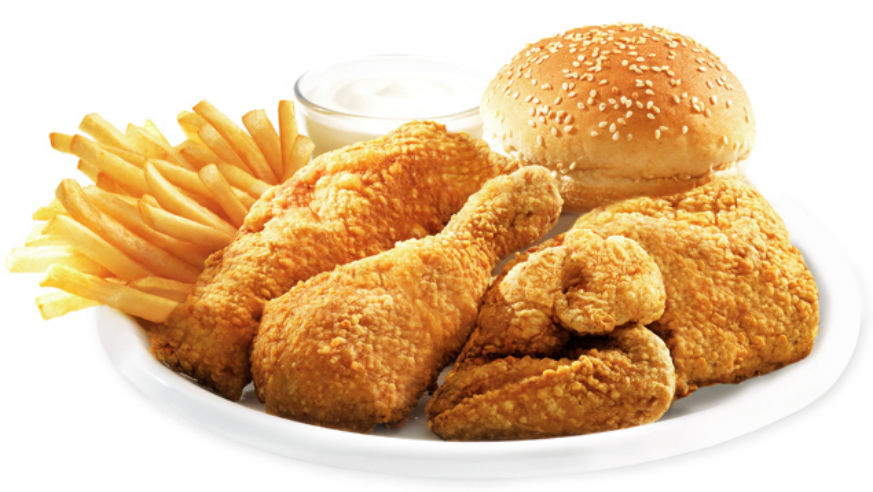 Ever wonder what qualifies as "fast food" in other countries? From salmon-roe pancakes in Russia to rib burgers in South Africa, you might be surprised by the answers. Here are eight chains you shouldn't miss.

We know you don't want to fly halfway around the world to eat a Big Mac. But how about steamed cod with mustard sauce and chives, mixed vegetables, and parsley baby potatoes? That, for instance, is what's considered fast food in Germany.

When we think of fast food in the U.S., we imagine mega-chains with thousands of restaurants around the world—too many, in fact, for the brands to have much quality control. But in some countries, such as Brazil and India, the concept is just catching on, and the quality of the food you'll find passing as "fast" is all the better for it.

Dining at white-table restaurants abroad is certainly a treat of travel (if you can afford it), but if you really want a glimpse into local culture, there's no better way than sampling the fare residents grab on the go. Of course, it doesn't hurt that the meals are as tasty as they are cheap. Here, then, are our picks for the best foreign fast-food venues overseas.

Signature Dish: Hamburger topped with a fried egg; black beans, white rice, and French fries on the side (10 reals, or about $6.50)
Many older and traditional Brazilians frown upon eating food with their hands, so when the Giraffaschain debuted in 1981 and became the first quick-service restaurant to hand out steel knives and forks, it caught on quickly. Giraffas now has 358 locations across Brazil. As at other fast-food joints, patrons at Giraffas pick up their orders from a counter, but food is usually presented on open plates, not in cardboard boxes, for guests eating in-house—another acknowledgment of national preferences.

Signature Dish: Beef noodle soup (13 yuan, or about $2)
In American Chinese restaurants, the menus are usually dominated by heavy fried-rice and lo-mein dishes, but in China simple noodle soup is the standard lunchtime fare. Locals seem to especially love the options at Mr. Lee, where patrons can customize their soup with condiments like dried-chili oil, soy sauce, white vinegar, and pickled greens. The soup is ordered from a counter and served in ceramic bowls, typically slurped standing up at the counter. The "East meets West" chain was founded in 1987 by Li Beiqi, a Chinese-American entrepreneur who previously created a chain of Beef Noodle King restaurants in California. The late Mr. Li's face is now emblazoned on restaurant storefronts in a style similar to Colonel Sanders at KFC. By 2010, the homegrown chain had 400 locations in 19 provinces across China.

Signature Dish: The Nordsee Plate, with steamed codfish fillets in a mustard sauce with chives, mixed vegetables, and parsley baby potatoes(8 euros, or about $11.50)
While Americans don't usually think of steamed fish as a fast-food staple, most of the menu at fish-buffet chain Nordsee is made up of precisely that. Codfish, plaice, pollock, salmon, and other fish are the stars of the show (patrons choose whether they want the items steamed, grilled, or fried). An emphasis is placed on fresh fish  sourced from well-managed waters, catering to the German preference for healthy, sustainable food. The appeal, though, is more universal: The company, now with over 400 locations across Europe, is the Continent's largest chain specializing in seafood.

Signature Dish: Kaati rolls; Chicken Tikka (75 rupees, or about $1.65) and mixed vegetables (45 rupees, or about $1) are the two most popular fillings
Street-food stalls are a longtime standard in India, and most fast-food chains have struggled to compete there as a result. One of the first to break out, in 2004, was Kaati Zone, which specializes in kaati rolls—unleavened flat bread that's been lightly fried and coated with egg, then stuffed with meat or vegetarian fillings and served with a side of fries sprinkled with tangy masala spices. (Typically, one roll counts as a snack, two as a meal.) Each Kaati Zone kitchen, restaurant, and kiosk has completely separate cooking and serving processes for vegetarian and meat dishes to accommodate local traditions. That kind of attention to detail may be why Kaati Zone caught on: The chain now has 15 locations, mostly in the city of Bangalore

Signature Dish: Blini filled with red caviar or salmon roe (240 rubles, or about $8.30)
Founded in 1998, Teremok has spread to 111 restaurants and 80 street kiosks in Moscow and St. Petersburg. While soups, porridges, and salads all appear on the menu, it's really all about the blinis. These thin, triangular-shaped, wheat pancakes are wrapped around various fillings (sweet or savory) and are baked to order at the counter in front of your eyes. In the U.S., we're not used to thinking of this tasty dish as a fast-food item, but in Russia it's available all day and evening. Down it with some kvass, a low-alcohol drink made from rye flour with malt, or else some Hmel'noy Med (a half litre of honey beer).

Signature Dish: The four-piece chicken meal (mild or spicy) with garlic sauce, French fries, and bread (12 riyal, or about $3.25)
Albaik was founded in 1974 in the Saudi Arabian city of Jeddah and quickly became one of the most beloved fast-food chains in the Middle East. (You might have spotted the business-class travelers on Emirates and Qatar Airways toting containers of Albaik along with their duty-free shopping.) Its claim to fame is its breaded chicken, which is pressure fried to keep the meat juicy. The enterprise has 46 permanent locations, which might sound like small potatoes, but when you consider how sparsely populated the Kingdom is, that's a huge accomplishment.The chain is so popular that the company operates a pop-up restaurant once a year in Mina (Makkah), which caters to hundreds of thousands of prayerful Muslims a day while they attend Hajj, a five-day religious pilgrimage that usually takes place in the fall. One passing observation: Only men are allowed to work behind the counters, in deference to local custom.

Signature Dish: "Crispy grilled" kaya (coconut jam) toast with slices of butter, a soft-boiled egg, and a mug of kopi (coffee)(Singapore $2.50, or about $2 U.S.)
Founded in Singapore in 2005, breakfast-and-lunch purveyor Toast Box now has more than 30 locations in the city-state and 12 elsewhere in South Asia and the Pacific, including Hong Kong, Malaysia, and the Philippines. But the dish it specializes in has been served locally by roadside kopitams (or coffee stands) since the 1920s. Toast Box brandishes one major weapon in the toast-and-spread war against longstanding roadside rivals: It has its employees dress in blue-and-white striped caps and aprons—a direct appeal to Singaporeans' delight in snappy uniforms. Yet Toast Box wisely retains the familiar touches of a traditional kopitam, such as Formica tabletops and natural wood decor.

Signature Dish: Rib burger and chips (32.95 rand, or about $4.50)
When McDonald's came to South Africa in 1995, locals laughed at its Big Mac; those three ounces of meat looked pretty puny next to the offering from local chain Steers: the Big Steer burger, which packs seven ounces of beef. In red-blooded, meat-loving South Africa, offering burgers of that magnitude is a sure way to gain fans. Steers has since maintained dominance as the national brand of choice, with 483 locations in South Africa today. Reminiscent of the Denny's chain in the U.S., Steers provides quick service and comfort food in a sit-down setting, though its restaurants also have to-go and drive-through menus. Burgers are the main item on offer, but pork riblets are a close second, served on a bun, as a rack, or as cut pieces.

10 Popular Travel Scams Around the World