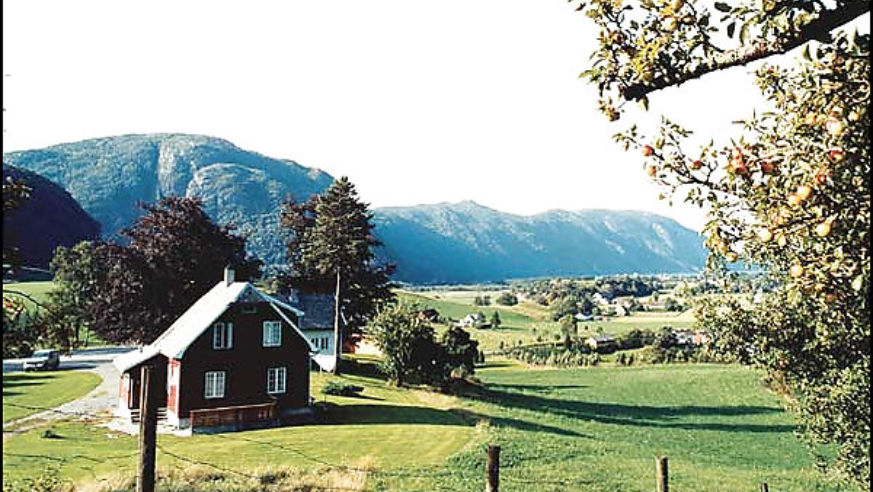 You can still experience ye olde Norway by vacationing at a farmhouse--and the government is making efforts to ensure it stays that way.

It's one of those clichés that has its roots in the truth: Many American visitors to Norway are descendants of the roughly 800,000 Norwegians who immigrated to the U.S. between 1825 and 1925. They want to go back and see what life was like for their grandparents and great-grandparents. Times have changed, of course, especially since the country became rich with oil. So the Norwegian Ministry of Agriculture--in an effort to preserve the rural landscape and culture--has been subsidizing the conversion of farmhouses to inns.

The program began in 1995, but it wasn't until the Norwegian Rural Tourism and Traditional Food organization (or NBG) was formed in 2004 that it took off. "We now have 550 members," says NBG director of administration Sunni Grøndahl Aamodt. "Visitors can stay in traditional cabins, converted barns, even lavvus [tepees] and fishing lodges." While the properties are spread throughout the country, the densest pocket of farmhouse inns is in a fjord-laced area 200 miles southwest of Oslo.

One of the earliest examples of these conversions was Høiland Gard. When two bachelor brothers up the road died without any heirs, the Vadla family acted fast. "We thought we'd buy the property and add it to our dairy and sheep farm," says Synnøve, speaking for herself, husband Sigbjørn, and daughter Silje. But then they had a better idea. After painting the barn Venetian gold, building an addition, and refurbishing four cabins, including the original 1814 farmhouse, the Vadlas opened Høiland Gard in 1996. The five guest rooms in the main house and the cabins (which sleep 10 to 16 people) are paneled with knotty pine and furnished simply so that nothing detracts from the view--a long tumble of meadow that runs down to both a fjord and Lake Riskedal. The family organizes canoeing and kayaking excursions, as well as picnics that often include Sigbjørn's porridge studded with smoked ham.

The Vadlas also run Sanitas, on Lake Riskedal. Originally a summer camp for underprivileged boys, the house stood abandoned for 30 years until the Vadlas rescued it. Opened in 2005, Sanitas overlooks a small beach and the lake beyond, where guests go swimming and boating. The nine bedrooms are divided into two apartments, each with its own kitchen and bathroom.

Thirty minutes north of Høiland Gard, Fossane represents a kind of homecoming for owner Kari Egil Sørensen. "I grew up here and then moved away," she says, "but the farm is always deep inside you. When my husband, Sven, and I came back, I felt like I wanted to share my childhood and culture." The Sørensens rent three cabins (each accommodates as many as six guests), including Kari's great-grandfather's home, which the couple moved from its original site in a neighboring valley. "We're really preserving two farms in one," says Kari. The cabin she was born in is painted red and crowned with a thatched-grass roof. It's utterly authentic, with painted cupboards, hand-carved beds, and heirlooms, including a pair of clogs whittled by Kari's grandfather. "You can fish in the lake and the fjord, which is less than a mile away, or hike in the mountains," Kari says, "but what's most important is what you can't do. We don't put any televisions in the cabins, so our visitors only hear the sound of the waterfall, the birds, and the sheep bells."

It's equally peaceful at Mo Feriehytter, a former dairy farm on the banks of the wide Suldalslågen River. Owner Jone Moe's three cabins sleep anywhere from four to seven. The largest is designed as a contemporary retreat, with pillowy couches and a TV, though the cabin hasn't completely lost its Nordic soul--a pair of antique skis hangs on one of the pine-paneled walls. Jone's daughter, Kjersti, inherited the farm's ancestral cabin, which the Moes don't rent out because it's full of family memorabilia. "My brother and I are the eighth generation on this farm, and it's important to care for our legacy," says Kjersti, a trained mountain guide who takes guests out hiking, canoeing, and fishing.

Just across the Suldalslågen River, at Mo Laksegard, is a converted farmhouse with a heated swimming pool and a hot tub. The three apartments and three cabins (all designed to sleep up to six) have amenities that are unusual for farmstays, including satellite TV and kitchenettes with dishwashers. Traditionalists will prefer the older, more soulful cabin down by the river. Whatever the style of accommodations, visitors are spoiled for choice when it comes to activities. "We take people salmon fishing and offer rafting trips to a wilderness camp where you can grill your dinner over an open fire," says owner Bjørn Moe. He's even begun to offer something he calls a "salmon safari," which involves squeezing guests into wet suits and sending them racing downriver, with the current, while the salmon swim upstream to spawn.

Johanne Marie Heggebø, who has lived at Eide Gard for 40 years, is more intent on protecting the past. The four small rooms that she rents out in her farmhouse feature carved wooden beds, duvet covers embroidered with daisies, and a shared bathroom with one unexpected note of flamboyance--a tub with gilded claw-feet. Eide Gard sits on a wide curve of the Ølensfjord, a sight that's framed in each room by the lace curtains. Johanne Marie serves meals in the medieval summerhouse, which was once used as the kitchen in warmer months. Guests sit on benches, enjoying roasted salmon topped with pesto, and pudding studded with fat cloudberries. "I pick my own berries high in the mountains," Johanne Marie says. "They grow in a different place each year. You have to have a nose for cloudberries."