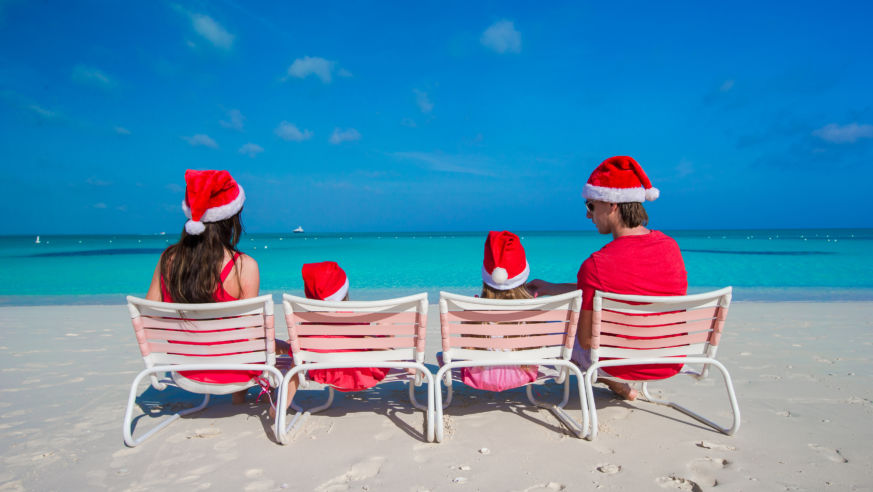 By going against the flow and booking a vacation between the holidays, you can save money and avoid crowds.

Can you keep a secret? The weeks between the busy Thanksgiving and Christmas/New Year’s holidays can hold bargains for travelers who are willing and able to sneak away for an early-December “mini shoulder season.”

Everybody knows Thanksgiving week is one of the busiest periods of the year, with more than 50 million Americans on the move and airfares and hotel rates typically rising. Likewise, as you get closer to Christmas Eve, the more you can expect to pay for airline seats and hotel beds. But what is not commonly understood is the sweet spot in between those holidays (roughly from late November through Dec. 20 or so) brings opportunities for savings as theme parks, hotel chains, and airlines see a big drop in demand and seek to entice travelers with good deals. Here are some of the most alluring places to consider.

Devotees of Walt Disney World, in Orlando, FL, who have made multiple park visits consistently report early December is one of the most magical times to enjoy iconic attractions like Space Mountain, Fantasyland, and the new Star Wars Galaxy’s Edge. Holiday decorations and events abound, including Mickey’s Very Merry Christmas Party, Minnie’s Wonderful Christmastime Fireworks Show, and Epcot’s International Festival of the Holidays and Candlelight Procession. And select Disney Resort hotels such as Animal Kingdom Lodge, BoardWalk Inn, and the Grand Floridian Resort & Spa offer up to 20 percent savings on bookings right up to December 24, when the crowds return and room rates rise. (Learn more at disneyworld.disney.go.com). If you’re considering a trip to Disneyland, in Anaheim, CA, for its holiday festivities, aim for the weeks of December 9th and 16th for lower rates at popular on-site hotels such as the Grand Californian Hotel & Spa and the Disneyland Hotel. (Learn more at disneyland.disney.go.com)

Travelers can enjoy immersive lands devoted to the Simpsons, Jurassic Park, Harry Potter, and more, plus get a head start on holiday celebrations minus the hordes by booking a stay at Universal Orlando Resort in early-to-mid-December. You’ll enjoy the Christmas decorations and events at The Wizarding World of Harry Potter, Universal’s legendary Holiday Parade, and a live retelling of Dr. Seuss’s The Grinch in the ‘Grinchmas Who-liday Spectacular.’ Hotel bargains are available for stays until December 19, including rates starting at $120/night for a four-night stay at Universal’s Cabana Bay Beach Resort, including early park-entry privileges each morning. (Learn more at universalorlando.com) A visit to Universal Studios Hollywood, in Universal City, CA, in early-to-mid-December offers similar attractions and holiday-themed events and reduced crowds, with nearby partner hotels offering reasonable packages that include room and park entrance starting around $190 per person; prices start to tick upward as you get closer to the weekend of December 20. (Learn more at universalstudioshollywood.com)

Sure, most travelers dream of escaping the cold weather in January and February. But the “mini shoulder season” between Thanksgiving and Christmas is an ideal time to plant yourself on a warm white-sand beach at major savings. From the South Pacific to the Caribbean, warm-weather beach communities regard early-to-mid-December as a time to lure bargain-seekers. Hawaii hotels and resorts are known for offering nice post-Thanksgiving deals such as complimentary nights added to your stay; the Big Island, home to Hawaii Volcanoes National Park, consistently offers the best hotel rates among the Hawaiian islands. South Florida and the Caribbean have said “buh-bye” to hurricane season and offer buy-one-get-one-free stays (which can often be even more generous than that – research deals online, then follow up with a direct call to the property and ask, politely, if they can offer you even more).

Now is the time to research and book a 2020 December river cruise through some of Europe’s legendary Christmas celebrations and public markets. Follow cruise lines such as Viking River Cruises and Avalon Waterways on social media and sign up for alerts so you can jump on good deals, which are typically offered up to a year in advance (when cruise lines are especially eager to fill staterooms for the coming year). For the best possible taste of Europe’s Christmas markets, with their handmade crafts, elaborately decorated baked goods, and endless old-world charm, choose a cruise that will visit Central European cities like Vienna and Budapest. Note: While it’s theoretically possible to grab a last-minute deal on a 2019 Christmas markets river cruise, it is unlikely at this late date. (Learn more at vikingrivercruises.com and avalongwaterways.com)

Can’t afford a trip to Paris? Opt instead to stroll the charming winding streets of Québec City, along the St. Lawrence River, where you can practice your French language skills, try an array of authentic local cuisine (including the ultimate “gravy fries,” poutine), and sip great wine. While Québec draws visitors from all over the world as the New Year arrives with its winter festival and ice sculptures (and the ice hotel, opening January 2), early December is a great time to get a taste of all the city offers before the crowds arrive. (Learn more at quebec-cite.com)