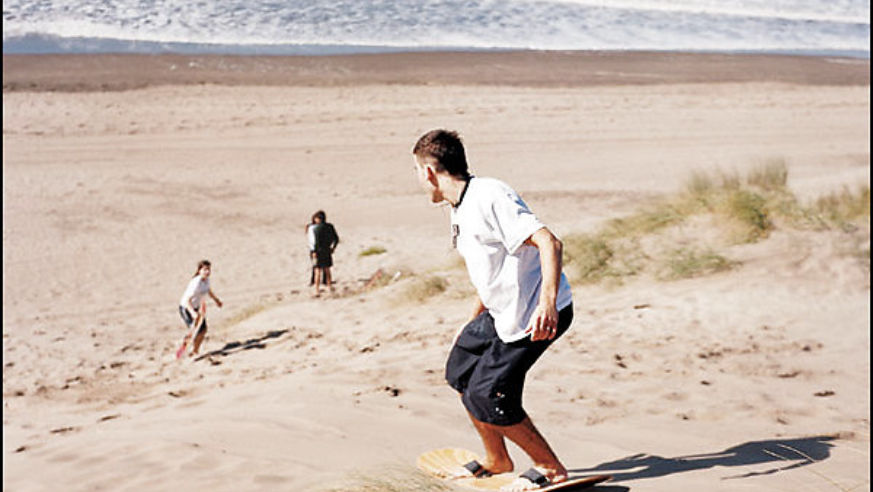 Any apparent contradiction in the name Mar de las Pampas--Sea of the Prairie--disappears half an hour into the 225-mile drive south from Buenos Aires to the Atlantic Ocean. City eases into horse-prowled shantytowns, which in turn give way to an immense, green flatness occasionally dotted with cattle.

When Cintra and I visited Mar de las Pampas for the first time in February, the summer high season, we took the bus--a five-and-a-half-hour ride from B.A.'s Retiro Station. This time, we rent a car, knowing there will be little traffic in April, which is early fall in Argentina. About halfway through the journey we pull over in the dusty town of Dolores, where, at Parrilla Carlitos, beef and lamb sizzle on metal skewers over an open fire 20 yards from the road. Inside, full wine bottles hang upside down from the ceiling. As we dig into plates of short ribs and chicken, a waiter explains that the owners hung the bottles both for decoration and storage when they opened the restaurant 45 years ago, only to have heat from the tin roof ruin the wine. "You want to buy one?" he laughs. "Some are from vineyards that went out of business 30 years ago."

I know we've neared the coast when we enter the outskirts of Villa Gesell and the open pampas end abruptly in thick forest. Seventy-five years ago, an eccentric German-Argentine baby-carriage maker named Carlos Idaho Gesell bought 4,000 acres of barren beachfront and planted them with white acacias and marine pines that he hoped would provide wood for his carriages. The scheme earned him the nickname el Loco de los Médanos (Lunatic of the Dunes). When he saw how beautiful the forest was, Gesell turned conservationist, and many of the original trees are still standing today.

The road changes from pavement to sand as we cover the final five miles to Mar de las Pampas, little more than a spiderweb of streets lined with hotels and cabins for rent. At Village de las Pampas, just a block off the beach, we're shown to a room with stone walls, wood floors, and a balcony. If we were staying longer than a weekend, the grill and kitchen would come in handy. Downstairs, we have the glassed-in pool to ourselves.

In the late afternoon, Cintra and I scramble over the three-story dunes that separate town from the wide beach. A handful of kids surf the sand on boards rented from Boardwise while fishermen cast into the ocean. Farther down the beach, construction workers are busy remodeling the waterfront municipal bar complex Balneario Soleado. In summer, it's full of young families lingering over their lunches and soaking up the sun.

Restaurants in Mar de las Pampas mix the town's German past with the country's Latin roots. Off the main drag, we pass Lupulus, where in February we lunched on pasta salad and microbrew beer. But Cintra likes the look of La Jofaina, tucked down a sandy alley. An all-female cover band, Cejazzatrois, slow-jams on the stereo as we eat pumpkin gnocchi and spicy salteña empanadas--meat pies filled with chopped beef, hard-boiled egg, and olives.

There's one thing you notice right away in Mar de las Pampas: The town has a strange obsession with duendes, or elves. The next day, as we stroll along the wooden walkways that connect the various paseos (shopping malls), we play spot-the-elf, pointing to the figures painted on signs, displayed in stores, and hung from awnings. In Paseo del Duende, the town's main plaza, we browse the shops that make up Aldea Hippie--Hippie Village. When I've seen enough wool sweaters to last a lifetime, I suggest climbing the town's miniature lighthouse (it's less than half the size of a real one), where we get a fantastic sunset view of the slate-blue ocean. In Paseo del Anfiteatro, where concerts are often held in summer, we choose an outdoor table at Las Pampas. Skipping red meat this time, we order salads and calamari sautéed with garlic and parsley.

Before driving home the next morning, we stop in to see Luciana Vosen and Juan Taranco, the young couple who managed Cabañas El Ocio when we spent a week there in February. (They've since gone back to school.) During the construction of Cabañas El Ocio's five cabins, workers cut holes in decks and walkways to accommodate the massive trunks that shoot up in their midst. Evidently, it's a local rule that when people knock down one tree, they have to plant three. The Lunatic of the Dunes would be proud.

Getting there: By bus or car
The travel time from B.A. to Mar de las Pampas is about six hours. Rent a car (011-54/11-4311-1000, europcar.com.ar, from $50 a day), or take the bus. Plataforma 10 sells tickets for most bus lines, including Grupo Plaza, which charges $13 each way between B.A. and Villa Gesell (plataforma10.com). A taxi from the station to Mar de las Pampas costs $7. Everything in town is within easy walking distance.