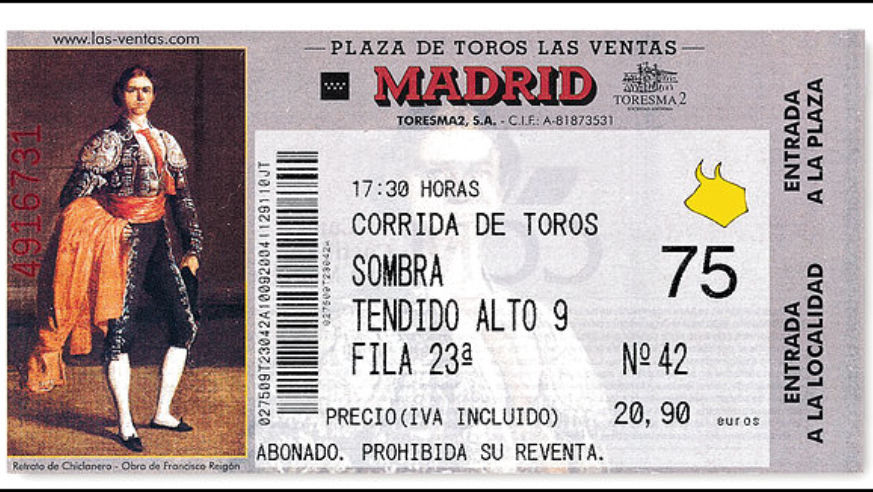 Alternately considered a barbaric spectacle, graceful art form, or cultural curiosity, bullfighting is part of the Spanish identity. One thing's for certain: The bulls never make it out alive, so it's not for the faint of heart.

All bullrings, or plazas, are round, shaped like coliseums of old. The seating terminology varies, but most bullrings are divided as follows: The first and second rows of seats surrounding the ring are known as the Barrera (barrier) and Contrabarrera, respectively. Behind these rows are six- or seven-row sections called tendidos: Tendido Bajo, Tendido Medio, and Tendido Alto, each section a little further back, in that order. Spain's version of nosebleed seats is an upper deck called the Andanada, also known as the Tejadillo or the Tendido Cubierto. The general rule is that higher seats cost less, but there are other factors at work.

Seats are also listed--and priced--according to how much the sun shines on them. The categories are sol (sun), sombra (shade), and sol y sombra (a mix of sun and shade as time passes). Picture the plaza from above: If 12 o'clock is in the sombra, 6 is in full sol, and 3 and 9 experience a mix of sun and shade. Printed on each ticket will be something like Tendido Medio 8, Numero 34, Sol (row 8, seat 34 of the Tendido Medio section in the sun). The sun can be broiling, so it's no wonder sombra tickets cost more. Prices range from as little as $5 for Andanada Sol seats to more than $140 for Barrera Sombra.

The ticket price is the same throughout an entire section, no matter if it's row 1 or 5. Ticket sellers habitually offer the worst seats first. If you request Tendido Medio, they'll try to sell row 13 even if row 8 is available, so always ask if they have anything lower (más abajo). In Madrid, where there are bullfights every Sunday from April to November at Las Ventas bullring, tickets go on sale at the box office every Friday for the next bullfight. Tickets marked up by around 20 percent are sold by vendors in the city center, including Teyci, next to the Plaza de Colón, and La Taurina and Localidades Santo Domingo, in the Puerta del Sol area. You can also order tickets online through tauroentrada.com, which adds a $18 charge per seat; the fee covers mailing tickets to any address in Spain (including a hotel). If you're scalping (it's illegal but rarely enforced), haggle as much as possible, using the price on the ticket as a reference point. If it's a weekday and the event has already begun, a scalper will unload tickets for cheap (ushers won't seat you until there's a break).

"Seats" are really just spots on a cement block, so rent a cushion (about $1.25) inside the bullring. Food and drinks are sold on the premises, too, but most people bring their own wineskins, bread, and chorizo. Sometimes the cheap seats are the most fun. There's often plenty of food and wine, as well as leathery old-timers wearing berets, smoking cigars, and heckling bad bullfighters.