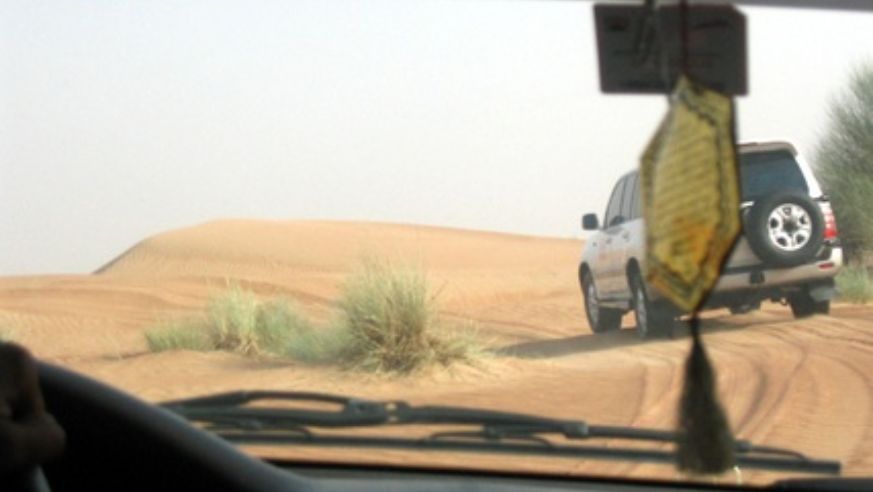 When I made plans to visit my parents in the Middle East, I picked up a February 2007 issue of Budget Travel to read its feature on Dubai ("Just Add Money"). The writer claimed that the country’s popular desert safaris were…well…lame. But I wanted to do one anyway.

Aside from lizards and camels, you won’t see many animals. In essence, a desert safari involves a jeep drive through enormous mounds of sand (called "dune-bashing"), and a stop at a campsite where you’ll have the opportunity to ride camels, get henna tattoos and be entertained by a belly dancer during dinner.

The real draws are the ride and subsequent view. When we got in the car, our driver and guide from Desert Link (011-971/4-283-0504, desertlinkdubai.com) advised us to fasten our seatbelts. As we started barreling through the dunes, at points on the brink of teetering over, Jasim sat sans seatbelt, fiddling with the radio. A guy in our jeep dubbed him "the Master" as he fearlessly drove us through peaks and valleys.

Around us, there were miles of sleek fiery orange hills, only crumpled by the tracks of our predecessors. It was thrilling, albeit slightly dangerous. After about 20 minutes, our pack of eight jeeps stopped to watch the sunset. A group of American college kids had brought snowboards and immediately started jetting down the dunes. I knew the $60 was worth it.

HAVE A COOL TRIP JOURNAL STORY OF YOUR OWN?