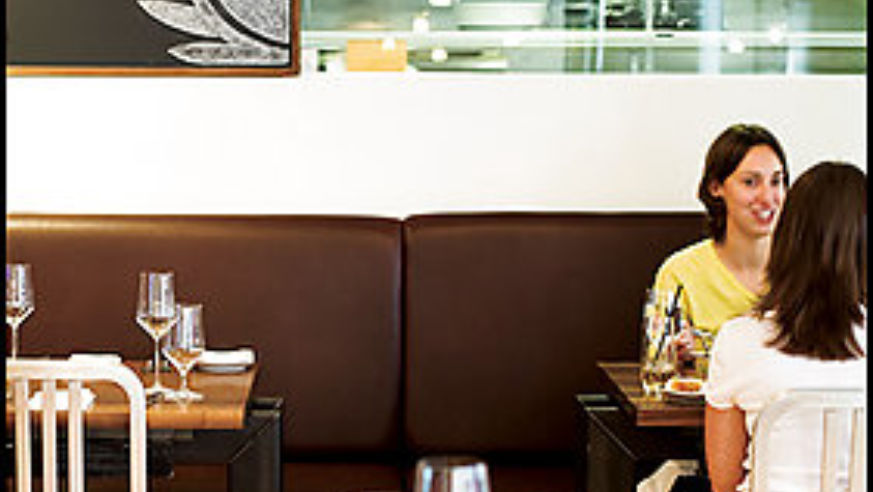 Six city favorites include a caf&eacute; crossed with a live jazz and blues club, a take-out shack for lobster rolls, and a celebrity chef's casual spot for untraditional tapas.

Hungry Mother: Four restaurant veterans who met while working the fine-dining circuit in Boston got together and opened this tiny, eclectic space (the floors slope every which way) near MIT. The emphasis is on sustainable ingredients and robust Virginian country flavors from the home state of chef Barry Maiden (pictured far left). You won't find a better meal—from cornmeal-coated catfish to flatiron steak—in Boston, even at twice the price. Make a reservation, unless you like waiting in line. 233 Cardinal Medeiros Ave., 617/499-0090, hungrymothercambridge.com, entrées from $9.

The Beehive: Come for the music; stay for the food. That's pretty much the unspoken motto at the Beehive, a café crossed with a live jazz and blues club that regularly hosts the Tim Miller Quartet and soul sister Valerie Stephens. Executive chef Rebecca Newell's late-night nibbles include grilled cheese sandwiches served with short ribs, Guinness-battered fried oysters, and an irresistible trio of mini beef Wellingtons. 541 Tremont St., 617/423-0069, beehiveboston.com, entrées from $11.

Pho Republique: The place looks a bit like a Vietnamese version of Disney World—Buddhas of all shapes and sizes adorn the walls, bathrooms, and bar—but the food is authentic. It takes the chef close to eight hours to perfect the cinnamon-and-anise-scented broth and satiny, hand-cut chow fun noodles that compose the signature dish: massive bowls of pho with beef brisket, chicken, shrimp, or tofu. It's worth every second of effort. 1415 Washington St., 617/262-0005, phorepublique.net, entrées from $13.50.

Persephone: This fashionable restaurant may share a space with a trendy clothing boutique, Achilles, but the food won't give you sticker shock. In fact, it's a bargain considering the bistro's kitchen is run by chef Michael Leviton of Lumière, one of the city's top-rated restaurants. Leviton has a deft touch when it comes to fine food, transforming a dish as basic as sunny-side up eggs into something spectacular by using duck eggs, shiitakes, gremolata, and rosemary focaccia. 283 Summer St., 617/695-2257, achilles-project.com, small entrées from $11.

Kelly's Roast Beef: Scoring a lobster roll at Kelly's is the birthright of every Bostonian. There's nothing fancy about the place: The take-out shack (also known for its roast beef) hasn't changed much since it opened in 1951 in the Italian enclave of Revere. But the creamy concoction of crustacean, mayonnaise, and a hint of celery on a perfectly toasted and buttered bun is the most delicious lobsta Boston has to offer. 410 Revere Beach Blvd., 781/284-9129, kellysroastbeef.com, sandwiches from $5.

Toro Best: known for his upscale cuisine and appearances on major food shows, chef Ken Oringer has set Boston ablaze with his casual Spanish restaurant, Toro, and its not-so-traditional tapas menu. The tiny bites include citrus-infused yellowfin tuna, foie gras with pear-and-bacon chutney, and a mean jamón serrano. Many of the plates pair nicely with the caramelized caipirinha, which tastes just like toffee. 1704 Washington St., 617/536-4300, toro-restaurant.com, tapas from $5.