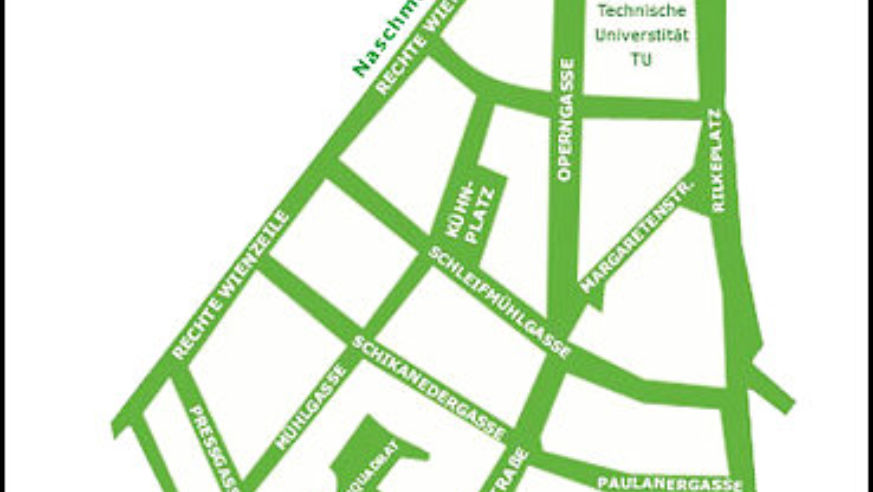 A recent influx of galleries, boutiques, and caf&eacute;s has created a thriving bohemian quarter that offers a refreshingly new perspective on old-world Vienna.

It takes an insider tip or a few wrong turns to wind up in the unassuming Freihausviertel, a small slice of the fourth district that is both centrally located and off the radar. (Guidebook maps tend to cut off right where the neighborhood begins.) Travelers who do make it here find small leafy squares, charming well-worn chapels, and low-rise buildings, some in sherbet pinks, mint greens, and peaches, and others still drab. The faint smell of coffee brewing trickles out of the many cafés and coffee roasters. There's an easygoing, energetic vibe and a feeling that you've finally figured out where the locals spend their time.

The Freihausviertel's current renaissance is the result of a hands-on community initiative and the latest in a history of ups and downs. The area got its name--literally "free house"--in the 18th-century when it sheltered thousands of Vienna's poor and ran its own school, library, and theater (Mozart's The Magic Flute premiered here in 1791). Then came a slow decline and heavy bombing in World War II. By the late 1990s, boarded-up shop windows and dingy streets had become the norm.

An article highlighting the Freihausviertel's plight appeared in the Kurier newspaper and caught the attention of gallerist Georg Kargl and antiques dealer Hannelore Kaffer. They banded together with a handful of businessmen to form a neighborhood association in April 1998. Kargl's gallery became the first of many to open on the main artery, Schleifmühlgasse, now the center of the city's contemporary art scene and the best place to score one-of-a-kind goods or just kick back with a melange, Vienna's version of the cappuccino.

Here's a tour of the hotspots:

(2) High Tea: Pots, cups, and all things tea-related are piled high in the front of the sprawling outlet. In back, the mellow lounge has appealingly lived-in couches, bowls of Indian sweets, vintage Chinese tea posters, and wooden screens. The menu spans 60 types of black, green, fruity, and herbal teas, each with a suggested wait time for the leaves to percolate. Two unobtrusive flat-screen computers let travelers stay connected for free. Paniglgasse 17, 011-43/1-504-1508, hightea.at

(3-5) Schleifmühlgasse Galleries:Georg Kargl Fine Arts settled in a former printing shop in 1998 and has made waves for its unconventional, avant-garde shows. Christine König Galerie soon followed. Its stable of European and American artists tailor their presentations to match the gallery layout, and discuss projects on Saturdays at noon as part of the ongoing LunchLectures series (some are in English). Engholm Engelhorn's long, narrow space showcases up-and-coming talents working in a variety of media--painting, installation, sculpture, and video.Schleifmühlgasse 5; 011-43/1-585-4199, georgkargl.com; Schleifmühlgasse 1A, 011-43/1-585-7474, kunstnet.at/koenig; Schleifmühlgasse 3, 011-43/1-585-7337, engholmengelhorn.com

(6) Pregenzer: In the loft above her shop, Austrian designer Jutta Pregenzer pieces together whimsical, flirty clothes that will make friends back home jealous. She pairs plaid cargo pants with a striped shirt and metallic leather jacket; a cheery floral skirt with a heavy corduroy blazer; paisley skinny pants with a beaded Indian tunic. Zippers, lace, and animal prints pop up in unexpected places. Schleifmühlgasse 4, 011-43/1-586-57-5, pregenzer.com

(8) The Point of Sale: The corner location and floor-to-ceiling glass windows make this airy café a plum spot for a lazy afternoon of people-watching. Bagels and hearty breakfast dishes such as sausage and cheese with biscuits are available until 3 P.M. on weekdays and 5 P.M. on weekends. Schleifmühlgasse 12, 011-43/1-966-9891, thepointofsale.at

(9) Rauminhalt: A mid-20th-century furniture gallery where everything on view is also for sale: a set of 1960s Italian pill-shaped lights; a leather swivel chair the color of butterscotch from Charles and Ray Eames; Carl Auboeck's flattened steel and wood fondue forks. While the focus is on European and American designs, Rauminhalt has an array of fabulously shaggy, earth-toned Berber carpets. Annual special exhibitions highlight Austrian architects who also create furniture. Schleifmühlgasse 13, 011-43/1-409-9892, rauminhalt.at

(10) Henny Abraham: The shop is a long-awaited dream come true for its chatty owner Henny who, at 52, set off for Asia and scoured flea markets for beautiful, one-of-a-kind wares such as hand-stitched cotton bed covers from Rajasthan. Exotic items large and small include kaftans from Uzbekistan, old silk kimonos from Japan, hand-painted papier-mâché ornaments from Kashmir, and shoe bags from Vietnam. British and Austrian cutlery sets and faceted Austrian cut glasses are more classic souvenirs. Schleifmühlgasse 13, 011-43/1-513-7961

(11) Babette's Spice & Books for Cooks: The shelves at Babette's are crammed with English- and German-language recipe books, memoirs of chefs and restaurant critics, glossy coffee-table volumes, and guides to eating your way through various countries. The accompanying selection of spices (gewürz) and herbs (kraüter) includes cardamom, wasabi, and bergamot. Nathalie and Andreas, the two foodies in charge, can help match recipes from the books with their proper seasonings. They also stock pre-prepared spice mixtures, chutneys, and harissa, a North African hot sauce.  Schleifmühlgasse 17, 011-43/1-585-5165, babettes.at

(12) Drei Kronen: The hotel faces the Naschmarkt, Vienna's largest and most colorful outdoor market. It's an ideal jumping-off point for exploring the Freihausviertel as well as Vienna's nearby attractions (Theater an der Wien, Secession Building, St. Stephen's, State Opera House). Its 41 art nouveau rooms have blonde wood furnishings, bright blue carpets, and crisp white bedding. Three crowns on the facade pay homage to the former empire of Austria, Hungary, and Bohemia, and to the hotel's name. Schleifmühlgasse 25, 011-43/1-587-3289, hotel3kronen.at, doubles from $110, includes buffet breakfast