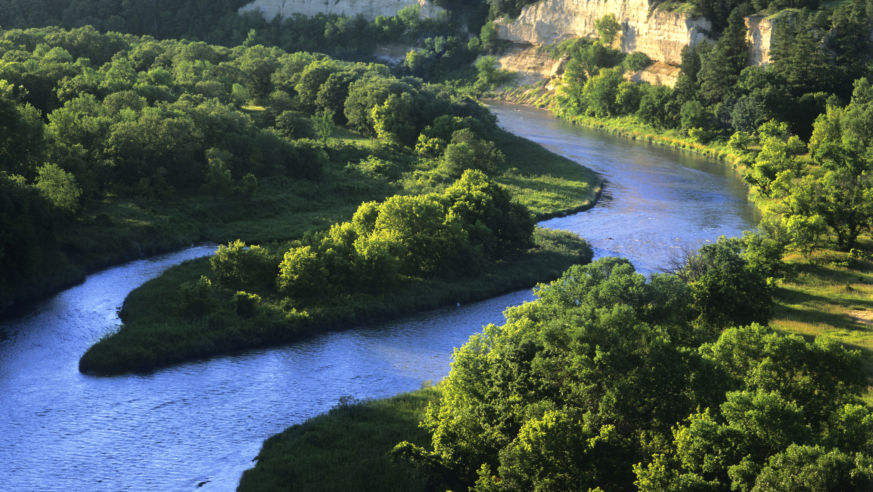 Smack dab in the middle of America, this leisurely drive across Nebraska's Sandhills region includes winding rivers, gentle hills, and some fascinating folks.

His great-great-grandfather founded the town in the late 1880s. At its pre-WWII peak, the population of Nenzel, Nebraska, reached 125. Today, it’s got all of 13 people. But that hasn’t stopped Neal Nollette, a Roman Catholic priest, from launching an outfitting company, 2 the Ends of the Earth, which runs river trips down a cliff-lined stretch of the Niobrara that’s often short of—well, water.

To bypass that inconvenient truth, Nollette invented the sport of “nyobrafting,” which he defines as navigating a waterway by any method necessary, though in practice it means repeatedly climbing out of your kayak and dragging it across the river’s many sandbars. As Father Neal says, “If you have a little bit of imagination and creativity, you can turn almost anything into a business.”

Welcome to the Sandhills, home to whooping cranes and prairie chickens, cowboys and cattle, plus some of the more ingenious tourism attractions either side of the Mississippi. Like much of the nation, these remote, sparsely settled grasslands—rolling some 19,000 square miles across north central Nebraska and reaching as high as 400 feet—have been hit by economic tough times. But the can-do spirit that built this country runs deep in these parts. Ever been to a 300-mile-long yard sale (known as the annual Junk Jaunt)? Or an art show that makes a stop at the Sinclair gas station in Dunning, where hand-crafted pottery shares the shelves with the Hamburger Helper and pickles? In a word: delicious.

“Where the West begins and the East peters out,” reads the restaurant sign my son and I spy in Burwell, home to Nebraska’s Big Rodeo. After a four-hour drive from Omaha, we’re ready for some cowpoke action. At the Northside Bar and Cafe, around the corner from the Dry Creek Western Wear store and saddle shop, a man in a white cowboy hat plays gin rummy with his buddies at a corner table (223 Grand Ave., Burwell, 308/346-5474). We’ve dropped by to see the hundreds of photos, posters, and other memorabilia decorating the walls of the pub’s rodeo museum. Perhaps other picture galleries double as a saloon, but surely this is the only one serving bull calf testicles. “Last Friday, we sold a whole case,” says Tammy Miller, waitress, bartender, and occasional curator. “Breaded and deep fried.” Thankfully, my son is hankering for something sweet. We’re directed to the Sandstone Grill in the old tin-ceilinged Burwell Hotel, where two foodies—sisters who moved here from Seattle and Kansas City—serve a long list of salads (Caesar, Asian, “sweet blue,” etc.) along with Nebraskan classics like sour cream raisin pie, which we order à la mode (416 Grand Ave., Burwell, 308/346-4582, sandstonegrill.com).

Sunlight is starting to wane as we reach Calamus Outfitters, near Nebraska’s third-largest swimming hole, Calamus Reservoir. We toss our bags into our rustic lodge room on the grounds of the Switzer Ranch, then hightail it outside for a sunset Jeep tour of 12,000 acres of grazing cattle (83720 Valleyview Ave., Burwell, 308/346-4697, calamusoutfitters.com).

Lying on the central flyway of some 500,000 cranes and 10 million other migratory water fowl, these are the Sandhills at their prettiest, dipping and rising like a roller coaster, blanketed with bluestems and tall bunchgrasses. In spring, you can watch the sharp-tailed grouse strut their stuff during their elaborate predawn mating dance. In summertime, there’s tubing and horseback riding. In the morning when I ask what we can do to help around the ranch, we’re told to saddle up and spend the next several hours rounding up stray cattle.

The late Charles “On the Road” Kuralt counted Highway 2, running alongside the Burlington Northern Santa Fe Railroad and a seemingly endless row of black-eyed susans and golden sunflowers, among America’s 10 most beautiful routes. We pick it up in Dunning and follow it west through what was once the Pawnee and Sioux tribes’ bison-hunting range. In Mullen, we have a date with Glidden Canoe Rental to go “tanking”—a popular Nebraskan sport that consists of floating down a river in a livestock watering tank. Some tanks come with picnic tables and lawn chairs. Ours is nine feet in diameter, made of galvanized tin, and outfitted with benches. Even with paddles, we’re at the Middle Loup River’s mercy. A red-tailed hawk soars overhead as the current crashes us into the bank, tangling us up in fallen branches. Eventually I learn it’s less jarring if I sit upright, not touching the sides of the tank. My son does just the opposite, naturally. Apparently what I call whiplash, he calls fun (Off Highway 2, Mullen, 308/546-2206, gliddencanoe rental.com).

Afterward, we grab a bite at the Rustic Tavern, in Mullen’s scruffy downtown. The kitchen is closed for remodeling, but the cook whips up a daily special in the smoker out back. This evening it’s BBQ brisket and the place is hopping with takers, many in boots and spurs (104 E. 1st St. Mullen, 308/546-2993). We order seconds before settling in for the night near Thedford at the Middle Loup River Ranch Guest House. There aren’t always animals, and most of the ranch is about 50 miles away, but what’s in a name? Besides, the two-bedroom place is comfy, all ours, and in the morning our host stops by with gooey cinnamon rolls (Highway 2, between Halsey and Thedford, 402/450-2268, middleloupriverranch.com).

North up Highway 83, the Sandhills take on a vast, rugged beauty, dotted with pristine lakes and spring-fed marshes and sweeping wide in every direction. In Valentine, we turn west for Nenzel and our 12-mile nyobrafting trip (402/389-2242, 2theendsoftheearth.com). It ends up taking all day, including the part where our shuttle van runs out of gas and we somehow land at Father Neal’s brother’s place to see his four-acre vineyard and the new pine-paneled wine-tasting room occupying the ground floor of his house. They don’t have a liquor license yet, nor do they have a name for their label. Still, Father Neal and his brother are optimistic that this venture (unlike the family’s erstwhile weekend cowboy cookouts) will soon be raking in the crowds. Watch out, Napa. Tiny Nenzel is on your tail!