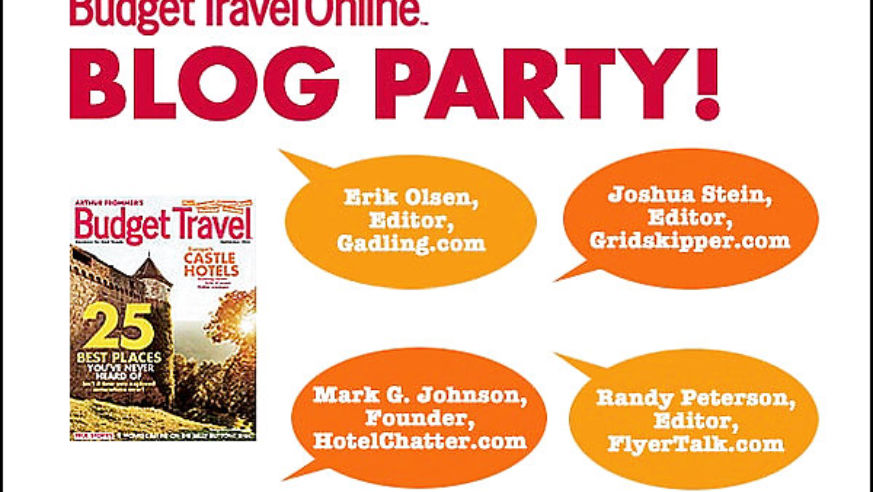 BudgetTravelOnline.com marked its first year of success with a special event at Tribeca Cinemas in New York City on Wednesday, September 13, 2006. To celebrate, we hosted a panel discussion with some of today's most intriguing travel bloggers, including gridskipper.com, gadling.com, hotelchatter.com and flyertalk.com. The rise of travel blogs is adding a lively new dimension to how travelers get their information these days. We're looking forward to a free-wheeling discussion about how they cover destinations, the ways they interact with their readers, and the impact of this new independent travel voice.

Read more about our guest panelists:

Mark G. Johnson
Mark G. Johnson is the publisher of travel centric daily web magazines, including HotelChatter and Jaunted. He is a ten-year Internet business veteran who worked for Web giants such as CNET and Travelocity during their formative years, and went on to found two Internet companies in 1999 and 2003 respectively. In December 2003 Mark launched HotelChatter, a daily web magazine chronicling hotel stories around the world. In July 2005 Mark launched a second web travel publication, Jaunted. Jaunted is a pop culture travel guide for a generation that possesses a small attention span.

Mark's travel publications have been featured in TIME magazine, The New York Times, The Wall Street Journal, USA Today, and many other popular offline and online media publications. Both Jaunted and HotelChatter are updated at least 10 times daily, use the weblog format, and are published by SFO*MEDIA, Mark's web properties consortium.

Erik Olsen
Erik Olsen is a journalist and lifelong traveler who has been to every continent except Australia...which he plans to do soon. He has been running gadling.com, now part of AOL, since it launched in 2003. He's lived abroad on a few occasions and once did a non-stop overland/oversea trip from Antarctica to Los Angeles. Erik currently resides in New York where he works as a video journalist for The New York Times.

Randy Petersen
The Wall Street Journal refers to Randy Petersen as "... the most influential frequent flyer in America," while The New York Times tagged him "the world's leading expert on airline frequent flyer programs." Randy is editor and publisher of InsideFlyer. Considered the leading publication in the world about frequent traveler programs, InsideFlyer has readers in all 50 U.S. states and 134 countries. He is also the editor of The Official Frequent Flyer Guidebook; a regular speaker at business travel seminars and conferences in the U.S., Canada, Europe, Australia and Asia; and is often called upon by the frequent travel industry for his suggestions and advice.

Randy has been named to the "Frequent Traveler Hall of Fame" sponsored by the Hilton Hotel Corporation and has been named "One of the 25 Most Influential Executives in Business Travel Industry" by Business Travel News. As an expert on frequent flyer programs, he has appeared on CBS, NBC, ABC News Radio, Good Morning America and European Business News. He is frequently quoted in The Wall Street Journal, USA Today, The New York Times and more than 100 other newspapers and magazines including The London Telegraph, International Herald-Tribune and The South China Morning Post. In fact, he has become the most quoted person in the world about frequent traveler programs.

Joshua David Stein
Joshua David Stein took the helm of Gridskipper in July 2006. Prior to becoming the editor, Stein was a frequent contributor to the site, as well as a contributing editor at flavorpill.com and Topic magazine. While in Paris, he contributed to parisist.com. Stein has also written for New York magazine, Guilt & Pleasure, Bene and Warrior.