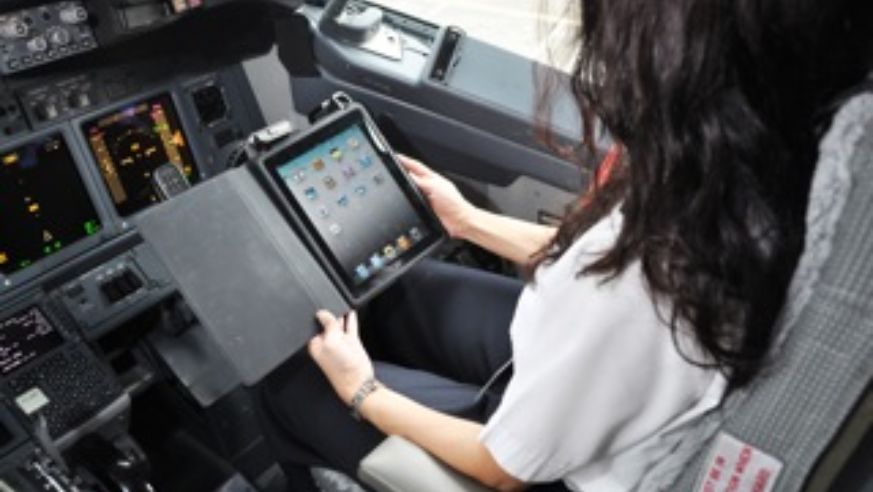 iPads might be taking a while to catch on with the general population, but it seems like they're quite a hit in the travel industry, where they have been used for everything from check-ins at hotels to tours at the Eiffel Tower. Pretty soon they'll be guiding pilots, too.

As part of Alaska Airlines' "Bye Bye Flight Bag" program, set to be complete by later this month, pilots will replace their 25 lb paper flight manuals with the state of the art, 1.5 lb iPad tablet, a measure that will save 2.4 million pieces of paper (pilots are required to carry the manuals).

According to the website, the iPad tablet features the Good Reader App, equipped with a "PDF version of 41 flight, systems, and performance manuals, reference cards and other materials," allowing for a quicker and easier way for pilots to look up a procedure from the flight deck.

Some hotels, such as The Berkley, have given iPads to concierges to help them handle duties such as checking in guests, more efficiently. The hotel also gives guests in certain suites the option of including an iPad with their stay, allowing them to enjoy all the games, videos, comics and newspapers new technology has to offer. There are also a few features to help guests plan out what they want to see and do when in London.

Also in 2010, the Eiffel Tower introduced a program that allowed visitors to rent an iPad, which included maps, photos, and behind-the-scenes historical information on how the structure was built, for about $10 (7 Euros). There is also a separate App, La Tour Eiffel, that can be downloaded onto your own iPhone, iPod Touch or iPad device via iTunes for free.

What do you think about iPads? Is it better to be guided everywhere by technology or do you find more fun in exploring new places on your own? Please share your thoughts in the comments section below.