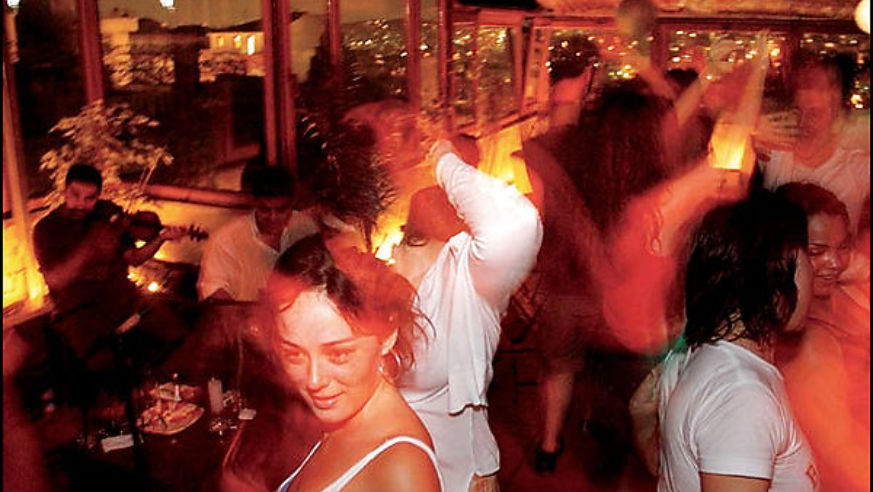 Istanbul is Europe's playground du jour. But the megaclubs on the Bosporus can't beat the sultry groove in one old neighborhood.

On Saturday evenings, all of Istanbul seems to stroll along Istiklal Caddesi, a pedestrian avenue in the Beyoglu district. Couples, packs of young men, and extended families share the sidewalks with lottery ticket vendors, men roasting corncobs on street carts, and café singers belting pop tunes.

Beyoglu is on the European side of the Bosporus, across the Golden Horn inlet from Topkapi Palace and the Aya Sofya. Istiklal Caddesi, its main artery, runs along the ridge of a huge hill, so that turning down any side street means getting an amazing view of the city. The area's art nouveau buildings, once home to apartments and embassies, now house upscale boutiques, galleries, and restaurants.

It wasn't always this way. Beyoglu, much like Turkey as a whole, has undergone a radical transition in the last decade. "When I opened NuTeras in 2001, the neighborhood was filthy," says chef Mehmet Gürs, referring to the first of his restaurants in his NuPera complex--now several clubs and restaurants stacked in a 200-year-old building. "Men pulled knives on me when I was on my motorcycle. People were afraid to come in groups of two, so they came in groups of four." As its name implies, NuTeras is on the roof, overlooking the Golden Horn and Süleymaniye Camii, one of Istanbul's most beautiful mosques. After dinner, well-dressed throngs arrive for drinks, DJs, and views.

NuTeras now has a lot of company. Inspired by Gürs's success, other entrepreneurs have launched a slew of bars in the vicinity. Gürs himself owns two more restaurants nearby, including Mikla, which opened last winter on the roof of the trendy Marmara Pera hotel. Sleek cafés line the crooked alleyways off Istiklal; in summer, tables are set up right on the street.

Weekends are scenes of sophisticated chaos--the jumble of cultures only makes things more interesting. "Istanbul is a mix of Asian, European, and Ottoman influences," says Seyhan Özdemir, architect of the design firm Autoban. "There are no real Turkish people here. We all come from different places and together make a new culture." Autoban has done the interiors of several Istanbul restaurants, including the Beyoglu branch of The House Café. It's filled with mismatched furniture that mixes styles and scale, like an Ottoman-inspired divan with a frame of Finnish plywood. Autoban's aesthetic permeates all the new businesses in the neighborhood. Around the corner, a tiny Italian restaurant named Otto becomes a rock and electro dance scene late at night, where the DJ looks like Che Guevara and mojitos are the house specialty.

Yet Beyoglu's new nightspots haven't displaced their neighbors, traditional Turkish restaurants and coffeehouses; they've just amplified the variety of the area. The rooftop restaurant and lounge called 360 Istanbul is opposite an alley lined with narghile (water pipe) cafés. To get to the top of the building, one must step into a creaky elevator and zip past a contemporary art gallery.

The old ways are still around--and in fact, the young, chic crowd digs them now and then. Several meyhanes (serving tapas-like dishes) on nearby Sofyali Sokak are institutions. At Refik, which has been in business for more than 50 years, families and friends gather at tables and drink aniseed liqueur raki. Waiters hold immense trays laden with examples of all the mezes, or appetizers, that are on the menu. Everyone chooses by pointing--stuffed grape leaves, chickpea salad, roasted eggplant puree.

On another narrow street, a traditional Turkish clarinetist, Hüsnü Senlendirici, plays to a full house at Babylon. Guys wearing Lacoste shirts sway while their girlfriends in designer jeans twirl their wrists belly-dancer style. The club books musicians five nights a week, from Afro-Cuban jazz to alternative rock to electronica. "People come even if they don't know who's playing," says Sarp Dakni of Pozitif Group, the music industry company behind the club.

Another Turkish clarinetist, Selim Sesler, can be found Tuesday nights at the rooftop bar Araf. A multinational crowd jams into the small space, drinking, smoking, and dancing like mad in front of large windows overlooking Istanbul's skyline. At 2 A.M. the dance floor is still packed and will be for a while. Locals know how good they have it. "Istanbul is very young and energetic," says one habitué when asked about the nightlife. "Everything we do is watched."