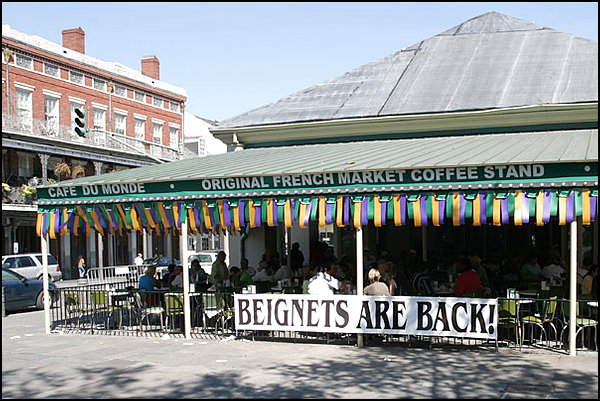 Beignets are back at Café du Monde

New Orleans is open for business, but what's it really like for tourists in the rebounding city? Do visitors feel like they're helping, or like they're only getting in the way?

Someone had the genius idea to station a brass band at the baggage carousel. "When the Saints Come Marching In" played, and spontaneous struts and toe-tapping broke out all around. It was my first time back to New Orleans since Hurricane Katrina, and my very first Mardi Gras. The party was in full swing and I hadn't even left the airport.

I honestly didn't know what to expect from my visit and found myself caught up in the city's collective exhale--its first real good time since all hell was unleashed last August. I spent a good chunk of my stay trying to keep up with the parades and politics, and walking around with spice-stained fingers from too many sidewalk crawfish boils. Mostly I hung out with friends, and friends of friends, all of whom had evacuated but returned to be a part of the rebuilding, and because of the magic. Really.

"Blame it on the voodoo," they said. "We just can't stay away." Plus, no other city compared to home. Houston was too big, Austin too clean, and Atlanta too far away. Rolling up their sleeves was the natural thing to do. NOLA's easy living has been replaced by a new, palpable sense of ownership of the city, and it seemed like everyone I met in the days leading up to Fat Tuesday, including two guys in matching suits made out of blue FEMA tarps, thanked me for visiting and being a part of the celebration.

Tourism is the answer

Mardi Gras may have been New Orleans's post-Katrina coming-out party, but what now? Before the levees broke, tourism was the city's top industry, accounting for 40 percent of its local economy. It not only makes good business sense for the city to do everything in its power to attract tourists again, it's the key to the city's survival.

The good news, as far as tourists are concerned, is that the city is mostly back to normal--at least as normal as NOLA ever was. There's still a significant amount of devastation in some residential neighborhoods, but most of the places and sights that tourists would want to visit are open. While only half of the residents have returned (about 200,000 people), evidence of a hiring frenzy is everywhere. Businesses are reopening every day. Planes to New Orleans are full. And tickets to the Jazz Fest (Apr. 28-30, May 5-7) are flying out the door. Robust crowds are also expected for the French Quarter Festival (Apr. 21-23), one of the largest free music festival in the U.S.

The neighborhoods, in brief

The most iconic and scenic neighborhood in the city, the historic French Quarter, is just as enchanting as it's always been, thanks to its comparatively high elevation--just five feet above sea level. The mostly residential neighborhoods closest to the Mississippi River--Garden District, Uptown, CBD, Warehouse District, and the Marigny, known collectively with the French Quarter as the "Sliver by the River"--fared pretty well thanks to a natural levee. Sure, some homes in the Sliver still have rescue-worker graffiti, a few traffic lights are on the fritz, and only a handful of restaurants are open after 7 P.M., but every day there are new signs of progress. Gentilly, Lake View, and even the Upper and Lower Ninth Wards are slowly returning to life, one house at a time. But chances are, as a tourist, you wouldn't go there anyway, unless you wanted to see the devastation.

Almost half of the city's hotels, inns, and guesthouses are open for business, with the majority clustered downtown in and around the French Quarter. And many combine affordability and charm. For example, doubles at The Olivier Hotel, an 1839 Creole Greek Revival town house with antiques and a lush courtyard, start at $135 but have been known to go for less than $100. There are currently 27,800 available rooms in New Orleans; some of them have been given professional scrub-downs since displaced locals moved out three months ago, while others are being fully upgraded and refurbished.

How to get around and what to do

One huge benefit to staying in the pedestrian-friendly French Quarter: You don't need to rent a car. Streetcars on the Canal and Riverfront lines are running, and they're free. (The St. Charles line will be operational by the end of the year.) You can walk to Harrah's Casino or hop a streetcar to the inviting New Orleans Museum of Art and its sculpture garden, which reopened to the public on March 3. And the impressive Audubon Zoo is accessible by a free river shuttle, which departs from the bottom of Canal Street. The award-winning 120-year-old zoo, whose hands-on general curator, Dan Maloney, and 11 other staff members looked after the animals and weathered Katrina while holed up in the reptile house, is a marvel of nature and wildlife education, not to mention good place to enjoy some shade. Last month, it returned to its Wed.-Sun. schedule. The zoo is even moving forward with its new rhino-petting and giraffe-feeding programs, as well as an insectarium.

New Orleans's appetite has returned, too. Everything you remember from previous visits is being served again--blackened beef tenders in debris sauce at Paul Prudhomme's restaurant, K-Paul's Louisiana Kitchen; fried chicken at Fiorella's; smoky seafood gumbo at Liuzza's by the Tracks; oyster po' boys from Domilese's; muffulettas (giant Italian meat and cheese sandwiches laced with green olive spread) from Central Market; and barbecue ribs from the Verti Marte. Acclaimed local chef Susan Spicer is working overtime at the helm of her wonderful restaurants Bayona and Herbsaint, churning out creations like cashew butter, pepper jelly, and duck sandwiches, and the city's most famous old-school restaurant, Galatoire's, is now taking orders. Its sibling, Brennan's, will reopen at the end of the month, and Commander's Palace starts taking reservations in late June. Today, the mayor's office estimates there are some 10,000 available restaurant jobs, which means when it comes to dining out, some patience is required. Lines can be long and service is slow, but when was it not?

To be fair, New Orleans still needs a lot help in a lot of areas, especially with trash clean-up. If you want to get involved, contact Katrina Krewe, founded last fall by local women who got tired of waiting for short-staffed city officials to take care of things. Volunteers meet Wednesday and Saturday mornings at 9 A.M. to rake and bag debris. Check the website (cleanno.org) for details. You can also lend a hand with Habitat for Humanity, which has gutted and cleaned out more than 1,000 homes in the wake of the storm. Although the organization recently announced that it has enough volunteers for the construction of 81 new homes slated for Musicians' Village, a project conceived by Harry Connick Jr. and Branford Marsalis to provide housing for the city's newly homeless jazz, blues, and Dixieland musicians, there are new initiatives on deck (habitat-nola.org). Of course, you could also give your time to any one of the many individuals or families who are busy working on their homes. Just knock.

The success of New Orleans's recovery is also now measured in occupancy rates, ticket sales, and po' boy wrappers. Booking a room at Le Richelieu, sipping a Pimm's Cup at Napoleon House, and shopping on Magazine Street are the very best things we can do for the city. So go--swing a hammer, play for a weekend, or both.

Let the tourists come marching in.