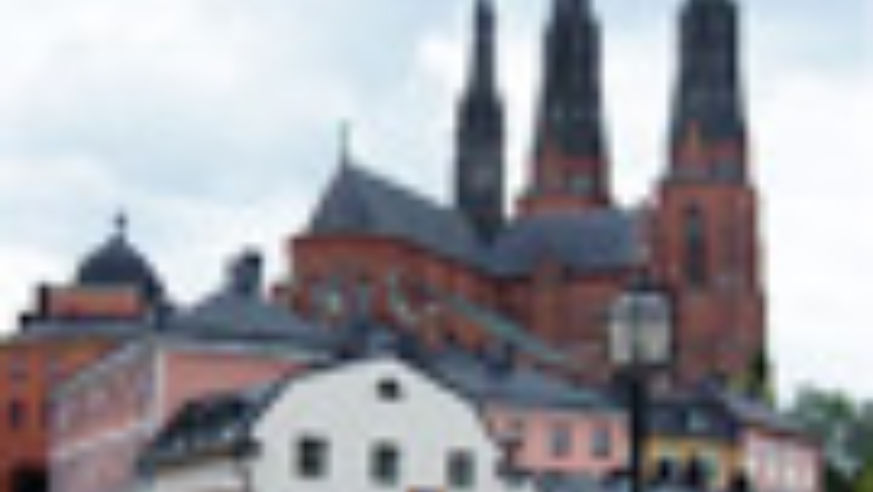 Bicyclists pedal along Uppsala's cobblestoned streets, lined with inviting cafés and boutiques. The Fyris River flows lazily by gardens, along tree-lined riverbanks, and beneath footbridges draped with violet and white petunias. It would be almost too idyllic, but the town gets a jolt from the 20,000-plus students enrolled at Uppsala University (founded in 1477). Their contagious energy peaks each spring on April 30 for Valborg, or Walpurgis Eve. The tradition of welcoming the spring dates back to pre-Christian pagan festivals, when giant bonfires were lit to ward off evil spirits and clear the land of dead winter debris.

In Uppsala, the festivities begin early: Families picnic on herring under blossoming trees in the Stadsträdgården (city park), and students race homemade boats down the river. At precisely 3 p.m., crowds gather below the town's imposing pink castle, where students past and present don their white graduation caps before swilling champagne, rolling down hills, and dancing around bonfires. Sweden's oldest university choir, Allmänna Sången, leads a nighttime sing-along in front of the castle.

The party continues into the early morning at the 13 nations, unique student societies that date back to the 1600s and whose buildings are scattered throughout the city. Each has a restaurant and a pub, which offer deep discounts and are normally restricted to Uppsala students. Those with a student ID from a foreign university can gain entrance with a 60 SEK ($7) weekly guest card purchased at the university student union. Visitors without a guest card may find that a kind word and a smile are enough to gain entrance to many nations, especially early in the evening.

Gästrike-Hälsinge nation, one of the few that stays open in summer, serves dinner in the backyard of a stately yellow mansion. Outdoor heaters and a stack of cozy fleece blankets ward off any evening chill, so you can linger over rounds of Åbro beers. Around the corner, overlooking a pond crowded with ducks and a few swans, Konditori Fågelsången is a quintessential Swedish café. The glass counters display dozens of sweets—cakes draped in green marzipan (princesstårta), rich chocolate balls rolled in coconut (kokosbollar), spiced apple tarts (äppelkaka), and warm cinnamon rolls (kanelbullar)—that tempt you to skip a sandwich in favor of dessert on the outdoor patio.

For a more traditional and well-balanced meal, join the many Swedes who take advantage of daily lunch specials known as dagensrätt. Warm, filling Swedish classics like meatballs with gravy or salmon with potatoes and dill sauce are paired with a drink, a salad, bread, and coffee. Lunch at high-end restaurants, like the riverside Åkanten, is an especially good value (about 79 SEK/$9.50); the same meal might cost twice as much at dinner.

Across the river, along the pedestrian-only stretch of Svartbäcksgatan, department stores and a giant H&M share space with cafés and 100-year-old bakeries. In warm weather, vendors with small wooden carts sell raspberries and chanterelles handpicked in nearby forests. At Holmlunds, a bi-level clothing boutique, find dresses and skinny jeans from Acne, the current darling of Swedish fashion. Nearby, DesignTorget stocks whimsical housewares, toys, and gifts.

Still further along Svartbäcksgatan is the meticulously maintained garden of pioneering botanist Carl Linnaeus, who created the system of classification still in use today. The organized garden, known as Linnéträdgården, has been preserved to look as it did when Linnaeus lived in the adjacent house in the 1700s. Entrance to the garden is free from 5 p.m. to 8 p.m., Tuesday through Sunday.

Beyond the walls of Linnéträdgården, the towering Gothic spires of Scandinavia's largest cathedral, Domkyrkan, are visible above the rooftops. Inside the 15th-century redbrick cathedral, the smell of freshly blown-out candles lingers beneath the soaring gray stone arches. In the small chapel in the rear of the cathedral, Gustav Vasa—the 16th-century king considered the founder of modern Sweden—is buried alongside three of his wives.

Uppsala's oldest landmarks, a trio of royal burial mounds from the 6th century, are a few kilometers outside of town in an area called Gamla Uppsala, or Old Uppsala. As early as the 6th century, Gamla Uppsala was an important political and religious center, a home to Viking kings, and the site of mysterious pagan sacrifice rituals. Near the mounds, a 15th-century church faces the 21st-century Gamla Uppsala museum that details both the area's known history and its many unsubstantiated legends.

On long summer days, when the sun doesn't set until 10:30 or so, the fields around Gamla Uppsala are great for lounging on a picnic blanket. Give in to the urge to linger—surely there's a later train back to Stockholm.

For Gamla Uppsala, take bus 2 or 110 from Kungsgatan, in front of the train station. Round-trip tickets are about $7.40 on-board or $5 at Pressbyrån newsstands (there's one in the train station).

Spending the night
The Scandic Uplandia hotel by the main shopping drag, Svartbäcksgatan, has contemporary rooms and an on-site sauna (doubles from $100, including a breakfast buffet). Or try the nearby hostel-style Uppsala Vandrarhem & Hotell (doubles from $60). At most Uppsala hotels, prices drop considerably on weekends and in late summer when business is slower.