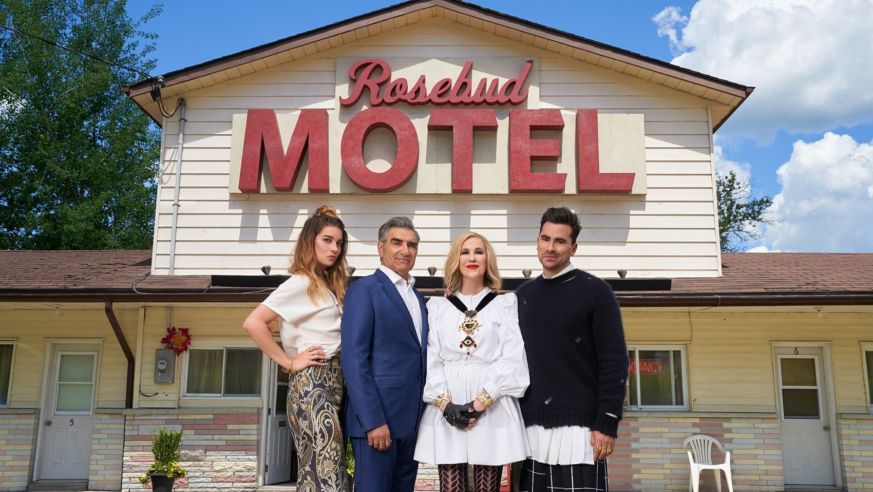 Ew, David! Schitt’s Creek’s Rosebud Motel is going up for sale, and you could be the new proprietor.

For the past six years, the CBC/Pop TV series – a fish-out-of-water comedy starring Eugene Levy, Catherine O’Hara, Daniel Levy, and Annie Murphy as a once-wealthy clan forced to relocate to the boonies – has filmed in Mono, Ontario, renting out a one-time motel to stand in for the show’s main location. And soon, fans will have a chance to stake their claim on the Rose family business.

In an interview with the Orangeville Banner’s Chris Halliday, owner Jesse Tipping revealed the motel would go up for sale in October, a decision he put off when the pandemic started in favor of housing those who needed to quarantine. “We were able to help out a great organization locally with their need,” Tipping said.

Prior to COVID-19, the motel served as home base for a host of young recruits attending a prep school basketball program nearby, as well as a filming location for Netflix’s Umbrella Academy, Amazon Prime’s 11.22.63, and David Cronenberg’s A History of Violence, the Banner reports. It was also listed on Airbnb at one point, though its onscreen fame was downplayed. “We didn’t advertise for you to come stay at Schitt’s Creek or the Rosebud motel,” Tipping said.

The real-life property may lack the signage of its onscreen counterpart, but before the pandemic, fans of the show flocked to see it in person, staging photo shoots and leaving reviews online – in character, of course. “We just kind of let them enjoy it because if they are not bothering anybody,” Tipping said. “People really get a kick out of it.”

It's been a good couple of weeks for Schitt's Creek fans. After enjoying huge success at the Emmy Awards last month, sweeping the comedy categories with wins for best actor and actress, best supporting actor and actress, best comedy series, and outstanding writing and directing, the show’s sixth and final season landed on Netflix ahead of schedule – a pleasant surprise to many fans.