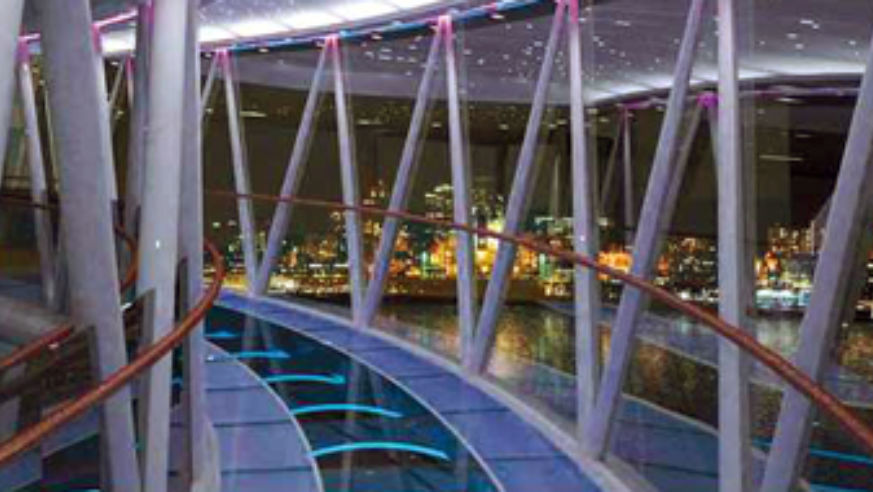 Courtesy Princess Cruise Lines
SeaWalk, a first of its kind, glass-bottomed walkway on a cruise ship

What will be new in cruise ships for 2013? Here's a sneak preview of Norwegian Breakaway and Royal Princess, plus an update on little known Azamara Club Cruises.

In May, Norwegian Cruise Line launches its twelfth ship, a 4,000-passenger beauty. The Breakway's home port will be New York City. The vessel will sail 44 trips a year, visiting ports in Bermuda, the Bahamas and Orlando [CLARIFCATION: Aug. 19. meaning nearby Port Canaveral, Fla.].

One of the ship's specialties is entertainment. Expect Broadway-style shows, such as the 80’s-inspired rock musical "Rock of Ages," and a Cirque du Soleil type extravaganza.

The ship will be unique in offering open-air seating for eight of its optional restaurants, such as one created by celebrity chef Geoffrey Zakarian. These restaurants will be part of an oceanfront, three-story boardwalk.

With 3,600 berths, the ship is Princess' largest ship to date and arrives June 2013. Some perks include an upper-deck pool exclusively for adults, a glamorous piazza-style atrium that's 50 percent larger than on other Princess ships, and the largest-ever Movies Under the Stars screen.

Most eye-catching of all is the glass-bottomed enclosed walkway that cantilevers over the side of the ship's upper decks. Passengers can look straight down to the ocean 28 feet beneath them.

The new cruise line many people don't know about

This brand, launched in 2010 by Royal Caribbean Cruises, stands out from competitors in a critical way: It stays overnight in port much more often than the average ship, giving guests more of a chance to explore destinations. This matters because Azamara travels to unusual ports, from the Isle of Skye to Israel's coastline.

Cruises: New Site Predicts When You Should Book