The world’s last Blockbuster is available to rent on Airbnb

By Andrea Smith
August 11, 2020
This unique rental is in Bend, Oregon.

If you fancy a night away somewhere unique and live local to Bend, Oregon, you could always try applying to stay at the world's last Blockbuster movie rental store. It will be listed on Airbnb for three individual, one-night reservations that will take place in September. 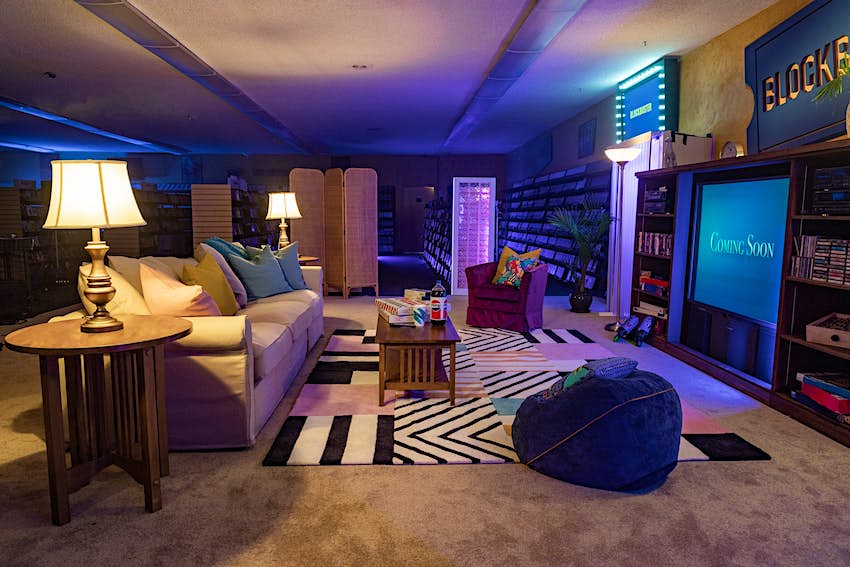 You can enjoy a movie night during your stay © Airbnb

The stay will give guests the opportunity to experience a 90s-themed sleepover and relive the bygone Friday night tradition of movie night. The experience can be booked for $4 (€3.39) plus taxes and fees, which is great value when you consider that movie rentals cost $3.99 (€3.38). Store manager Sandi Harding is listing the store in appreciation of all the Bend community has done recently to support the last-of-its-kind store during these difficult times, and she will stock the shelves with all the movies guests desire before handing over the keys. 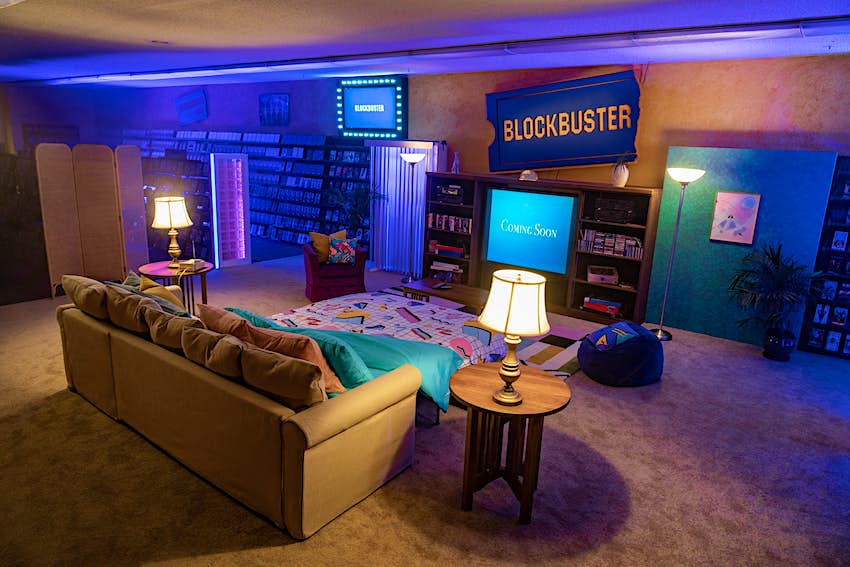 Guests can stay overnight at the Blockbuster store in Bend © Airbnb

While at the store, guests who book should adhere to COVID-19 safety guidelines around wearing masks and social distancing in a public space. Interested guests should also note host rules that are in adherence with local guidelines, which include that those who request to book must be Bend residents and come from the same household to minimize risk. The store will be cleaned in advance of their arrival and prepared in accordance with CDC guidelines, consistent with the Airbnb enhanced cleaning protocol.

You can watch movies for the evening © Airbnb

Those who don't manage to score a one-night stay can check out the living room space during store hours for a limited time after the final guests check out. If you want to request to book a stay on 18, 19 and 20 September, you can do from 17 August at 1pm PST on this link.

This story originally ran on our sister-site, Lonely Planet.

Celebrate 100 years of women's suffrage with these monuments

Explore the Great Outdoors of the Pikes Peak Region

Distancing with the stars: how to see the stars from home

In the age of social distancing, we are no strangers to the feeling of isolation. For many, working from home and avoiding social activities that give a sense of purpose and excitement to daily life can feel draining. There is nothing that quite puts the world and the struggles we are all facing into perspective like the night sky. Standing underneath a sea of bright stars can feel captivating, humbling and even intimidating. It is also an activity that lends itself easily to social distancing, which is why stargazing may be exactly what we need right now. In our modern world, it is oftentimes difficult to see the stars due to light pollution from cities. However, there are still ways to view the night sky even from the city or just outside of it. Photo by Andy Pearce If you live in an urban area, follow these five tips for stargazing close to home: 1. Avoid a full moon While looking at the moon is captivating, a full moon can make it difficult to see the stars. In places with heavy light pollution in particular, the added light from the moon can make stargazing trickier. Wait until the moon is smaller or not visible at all to stargaze from the city. 2. Look at the weather Before heading out to look at the night sky, make sure cloud cover and moisture in the air are minimal. A clear sky will make the stars that much more spectacular! 3. Figure out what you’re looking for Knowing which constellations and planets will be in the sky and getting an idea for what they look like before leaving home will make them easier to pick out when you get outside. Save a constellation map to your phone or even download an app that helps you navigate the night sky! 4. Find the right location Blocking the lights of the city will help your night vision as you view the stars. If you can get to a place, like a local park or the hills just beyond the city, that naturally blocks the light, do it! If not, try to find a place where things like your house with the lights off and a shed in your backyard can block the neighborhood lights. 5. Bring some equipment! Most people don’t have a telescope at their immediate disposal. However, if you have a pair of binoculars or even a small telescope, you’ll have an even better view of the night sky. Most lower-end DSLR cameras can take beautiful photos of the night sky with a longer shutter speed, high ISO and open aperture. Comet NEOWISE and a fire burning near Grand Canyon National Park, shot on Canon t6i by Andy Pearce Upcoming meteor showers that you could plan viewing for are: Delta Aquarids (July 30-31) Perseids (August 11-13) Draconid (Oct 9)Orionid (Oct 21-22) Taurid (Nov 9)Leonid (Nov 17-18) Andromedid (Nov 25-27)Geminid (Dec 13-14) Ursid (Dec 22) Different constellations are visible during different times of year. In the northern hemisphere summertime, you’ll see constellations like Cygnus, which resembles a swan and lies on the plane of the Milky Way, and Scorpius, which symbolizes a scorpion. Winter will bring constellations that include Orion, named after a hunter from Greek mythology, and Taurus, one of the oldest constellations in the sky. If you’re feeling the need to escape reality right now, head outdoors this evening and look up. What better way to social distance than to head outside at night and find a quiet, dark place to be alone with the universe? Kyla Pearce is a Budget Travel intern for Summer 2020. She is a student at Arizona State University.

Editor's note: helping you Rediscover America during a global pandemic

Just like so many of you, 2020 has been quite a wild ride for me. In February, I was handed over the reins to Budget Travel as its Publisher. At the beginning of March, a tornado hit my neighborhood in East Nashville. Then the COVID-19 pandemic largely wiped out the travel industry’s immediate future (and ad budgets). It truly would not surprise me if next week, the alien invasion sent us all back to phase 1. 2020 is a crazy ride. East Nashville after tornadoes hit on March 2, 2020. Photo by Laura Brown As the Publisher of a travel magazine during a global pandemic, I’ve been wrestling with this moral question: how can we ethically promote travel at this strange moment in history? We’ve gone to great lengths to answer this question. We’ve had a full team researching and extrapolating the ways COVID is affecting travel. We’ve reached out to local tourism boards for their recommendations. We’ve polled you, Budget Travel’s readers, to understand how your travel has been affected by the pandemic (the answer: a lot). And many of us have road-tripped across the Southeast to see it all for ourselves. We’ve been writing all summer. I am proud to announce that this week, Budget Travel is launching ‘Rediscover America,’ a content series that will focus entirely on how Americans can safely explore this beautiful country of ours. We’ll focus on road trips and amazing getaways you can drive to in all parts of the country, and promote activities that can be done while maintaining adequate social distancing. We will share travel deals that can be booked flexibly into 2021. We will adhere to CDC guidelines and advocate for wearing masks. Most importantly, we’ll remain flexible to adapt to new information and circumstances. If we work hard enough as a society, there may come a time in the future when we can all relax a bit. Until then, our commitment to promoting safe travel is not up for debate. Keep checking Budgetravel.com for fresh inspiration, and let us help you Rediscover America.