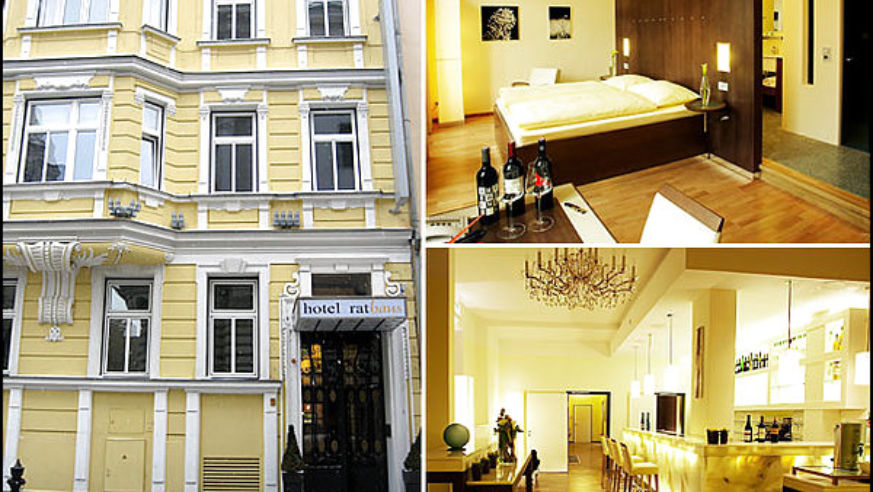 The Hotel Rathaus Wine & Design's elegant exterior dating from 1890 (left); one of the 33 wine-themed guestrooms (top right); and the lounge off the lobby

In Austria's pricey capital, five intimate hotels just as we like them: heavy on local flavor and light on your wallet.

Hotel Rathaus Wine & Design
Salzburg-based chef Klaus Fleischhaker and his wife, Petra, were already busy running a hotel and a Michelin one-star restaurant when they decided to take on a property in Vienna. The couple knew they'd need help revamping the dilapidated, 19th-century Hotel Rathaus, and enlisted Wine Academy graduate Martina Pöll as their go-to hotel manager. The three hit on the idea of dedicating each room to an Austrian wine. After much back-and-forth, they chose 31 winemakers, one distiller of schnapps, and one champagne maker. An identifying wine label runs the length of each door; black-and-white photographs of the vineyard and its cellar hang on the walls; and bottles of its star vintage fill the minibar. With the concept set, the boutique hotel was rechristened Rathaus Wine & Design.

"Sometimes in these modern design hotels you get the feeling of being in a hospital, it's a bit too cold," says Martina. She and the Fleischhakers worked with an Austrian interior designer to make the 33 enlarged rooms sleek yet still cozy. They retained the original dark wood and high ceilings, and added boxy, custom-made light fixtures, flat-screen TVs, skylights, and cream-colored bedding.

Altstadt
The five-story Altstadt rubs shoulders with Baroque townhouses and chic galleries in the cobblestoned Spittelberg Quarter. Built as an aristocratic home in 1902, the design hotel blends a filigreed wrought-iron staircase with funky halogen light fixtures, and scattered works by Andy Warhol and Annie Leibowitz. The 35 rooms and suites are individually decorated, and almost anything goes: prim stripes, splashy patterns, African and Chinese touches, and minimalist furnishings worthy of Philippe Starck's approval. There's even a Freud Room with a suitably big, complex-inducing leather couch (50-minute hour consulation not included). Named for its bright walls, the Red Salon's open fireplace and comfy sofas are the setting for free buffet breakfasts and afternoon tea and cakes. Eleven new rooms dreamed up by award-winning Italian architect Matteo Thun, known for his refined, pared-down style and stark colors, will open in June 2006. Kirchengasse 41, 011-43/1-522-66-66, altstadt.at, doubles from $155, includes buffet breakfast

Hotel-Pension Suzanne
A taste of fin de siècle Viennese elegance on a budget, the family-run Suzanne is done up with antique wood furnishings, landscape oil paintings, and plush chairs in deep shades of burgundy and green. The nine larger apartments have kitchenettes and sleep between three and seven people. It's central--around the corner from the State Opera House and the main drag Kartnerstrasse--without being noisy; nearly all the rooms face an inner courtyard. Walfischgasse 4, 011-43/1-513-25-07, pension-suzanne.at, doubles from $115 and apartments from $138, includes buffet breakfast

Pension Nossek
Mozart lived here briefly while drafting The Abduction from the Seraglio and the Haffner Symphony in the early 1780s. Most likely he was drawn to the building for the same reason as countless modern-day tourists: its unbeatable location. The small, family-run pension is a few minutes' walk from St. Stephen's Cathedral and Hofburg Palace, once the winter residence of Hapsburg emperors. Spacious front rooms have gorgeous views overlooking the shop-lined, pedestrian-only Graben. Original stucco, parquet floors, and crystal chandeliers add some pizzazz to the conventional floral bedspreads and wood furnishings. Book early! Graben 17, 011-43/1-533-70-41-0, pension-nossek.at, doubles from $132, includes buffet breakfast