Wikipedia
Havre de Grace (listen), abbreviated HdG, is a city in Harford County, Maryland, United States, situated at the mouth of the Susquehanna River and the head of Chesapeake Bay. It is named after the port city of Le Havre, France, which in full was once Le Havre de Grâce (French, "Harbor of Grace"). The population was 12,952 at the 2010 United States Census. In 2014, the city was honored by Smithsonian magazine as one of the 20 best small towns to visit in the U.S. 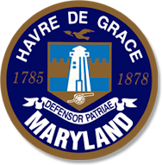 Chesapeake City is a town in Cecil County, Maryland, United States. The population was 673 at the 2010 census. The town was originally named by Bohemian colonist Augustine Herman the Village of Bohemia — or Bohemia Manor — but the name was changed in 1839 after the Chesapeake and Delaware Canal (C&D Canal) was built in 1829. Today, the town contains numerous old homes from that era that have been converted into bed and breakfasts, restaurants and the local historical museum.

Kennett Square is a borough in Chester County, Pennsylvania, United States. It is known as the Mushroom Capital of the World because mushroom farming in the region produces over 500 million pounds of mushrooms a year, totaling half of the United States mushroom crop. To celebrate this heritage, Kennett Square has an annual Mushroom Festival, where the town shuts down to have a parade, tour mushroom farms, and buy and sell food and other goods. It is also home to the corporate headquarters of Genesis HealthCare which administers elderly care facilities. Located in the Delaware Valley, Kennett Square is considered a suburb of both Philadelphia, Pennsylvania and Wilmington, Delaware. The local high school is Kennett High School. Its population was 6,072 at the 2010 census. It is also the birthplace of the sister of the 46th and current president of the United States, Valerie Biden.