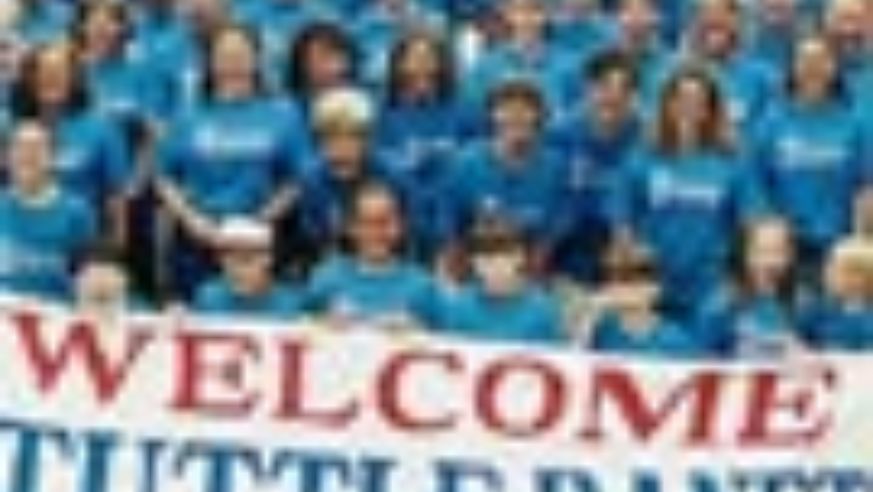 These days, most families are scattered all over the country, if not the world--giving more reason to get together but making it harder than ever to do so.

Kris Zahrobsky, a 25-year-old firefighter from the Chicago suburb of Berwyn, Ill., is a member of the Feelys, a family based mostly in the Midwest that for generations has tried to keep in touch and get together every other year or so. When Kris was growing up, the reunions were simple affairs, maybe in someone's backyard or at a state park. There wasn't a whole lot to do besides catch up, eat, and pose for pictures. "It was great to see all the relatives," says Kris, "but I remember being bored out of my mind."

For the 2005 reunion, Kris proposed a different kind of get-together--a weekend in the Wisconsin Dells, a destination that overflows with family resorts and water parks. "The Dells was my first choice," says Kris. "In the same building, the kids can go to the water park while the parents sit and relax." The Feelys decided to base the reunion at the Kalahari Resort, which has indoor and outdoor water parks, a banquet hall that can host a big family dinner, and all sorts of rooms and suites. Last fall, Kris even set up a website to post family news and a reunion itinerary, including times for group boat tours, casual gatherings in a hospitality room, and a mass on Sunday morning. The Feelys are expecting this summer's gathering to be the best turnout in years: around 200 people from 18 states, with some members of the extended family who haven't attended a reunion since the 1970s.

If you expect people to devote vacation time and endure hours of travel, the least you can do is make the reunion fun. Rather than the traditional backyard barbecue or potluck in someone's crowded living room, more and more families are going on cruises, renting a few beach houses, or heading to all-inclusive resorts.

Planning a big reunion is difficult enough. Add in coordinating a vacation that jibes with everyone's budget, schedule, and desires, and the job becomes nearly impossible. Age-old rivalries and differences don't help either. "You find out how dysfunctional your family is when planning a reunion," says Stacey Hopkins of Atlanta, Ga., whose family reunion of 150 to 200 people takes place every other year, usually somewhere in the eastern U.S. "Our family has a lot of alpha females, and it's not pretty when people don't agree. The experience can be traumatic."

From the planning stages to exchanging pictures after the trip's over, everyone involved should try to be flexible and keep things pleasant. "Don't talk about religion, politics, and child rearing," says Laurence Basirico, author of The Family Reunion Survival Guide. "Not if you expect everybody to have a good time, anyway."

There are many ways to make the experience as painless--and as fun--as possible, and we've done some of the homework for you. The consensus is that you should begin planning a reunion at least a year in advance, to allow time for deciding where to go and when, to give everyone ample warning for taking off work, and to make sure rooms will be available. If you've got a reasonably big group--over 20, say--lodging reservations should be made eight or more months ahead. Memorial Day to Labor Day is prime family reunion season because kids are out of school. The Christmas break is also popular, but prices are sky-high and many people have traditions they like to keep at home, as well as commitments to the other side of the family.

It's usually clear who'll be the reunion ringleaders--the same crew of matriarchs (and sometimes patriarchs) who host Thanksgiving dinners and send cards to everyone on their birthdays. "Somebody's gotta take charge, but no one should do it alone," says Basirico. "When things get going, have a travel agent serve as a neutral third party." People won't be offended when an agent says there's a deadline for deposits (and it's handy to have an outsider to blame should things go wrong).

After a few casual conversations indicate that there's a fair amount of interest, one of the ringleaders should send out a group e-mail. To keep the conversation from literally going all over the map, offer roughly three possibilities. List a few pros and cons for each, as well as ballpark costs. To avoid any confusion, specify up front who will have to pay for what. Some people will want to go camping while others will lean toward five-star resorts, so compromise is essential. Organizers of the Feely reunion in Wisconsin Dells knew that not everyone wanted to pay over $100 a night at the Kalahari Resort, so they provided booking details for a nearby campground.

Have each family pick a leader to voice its concerns and, if necessary, put the decision on where to go to a vote. Don't get hung up if someone doesn't want to go or cancels at the last minute. Carry on with the people who want to be there.

Figuring out food and activities on a vacation can cause anxiety for a couple, let alone for a group of 50. That's why cruises and all-inclusive resorts are naturals for reunions. They provide home bases for fun and relaxation, and you always know where meals will be. "Cruise reservations are no-nonsense: X tables at X times," says Kathy Sudeikis, president of the American Society of Travel Agents. "Anywhere else, when you have to do dinner for a big group, it's like moving the Fifth Army."

Some families prefer a place that's within driving distance of a majority of the attendees. A beach, mountain retreat, or small town can do the trick--but planners should be sensitive to anyone traveling a long way. No one wants to drive five hours after a six-hour flight. The reunion shouldn't be held in anyone's backyard either, because whoever's local might wind up bearing the burden of playing host and tour guide.

Every traditional vacation spot in the U.S. has a convention and visitors bureau (CVB), and you should put these organizations to work for you. Contact the CVBs of your top choices and tell them how big your group is and what you're interested in doing. They'll pass along your info to hotels, resorts, car-rental agencies, restaurants, and attractions--who in turn will send you offers, coupons, and brochures catered to your needs. Hotels and resorts are willing to give perks to big groups, whether it's a corporate retreat, a business conference, or a family reunion. "Put the ball in the venue's court and ask what dates can get you the most value," says Jonathan Miller, former president of the National Association of Reunion Managers (reunions.com). "Leverage the size of your group in terms of how much business you're bringing to the hotel." If you're not staying in an all-inclusive, it's probably worth it to pay a little extra for rooms with kitchens--or ask that the hotel provide them at no additional charge--because you don't want to run to a restaurant every time a child is hungry for a snack.

As for activities, the idea is to reunite and be with each other, but people will get burned out if things are too regimented. Give everyone ample free time. There's no need to eat every meal together. "More and more, people are saying lunch is on your own," says Laurie Van Horn, of the YMCA of the Rockies in Colorado, which hosts more than 800 reunions a year. "It usually works well when there's one planned activity a day to bring everyone together, maybe team building on the high ropes course or a hayride."

Always bear in mind that the reason for the trip is equal parts family and vacation, and that people will want to take it easy. Besides, if you allow things to happen naturally, the bonds created will be all the more meaningful.

Tips for a better reunion

Orlando's WDW has been an iconic family vacation for so long that it's possible for three generations to have memories of it as a special place. "It's great if you want to do the rides or just sit around the pool and catch up," says Judy Russell, of central New Jersey, who vacationed at WDW last summer with her seven siblings and their families. "You can even party at night if that's your thing."

Groups of eight or more people staying at a WDW property can sign up for Disney's Magical Gatherings, a program that opens up options not available to smaller groups or day-trippers--say, an evening cruise capped by a fireworks show, or a special dinner and safari at Animal Kingdom. Groups that fill 10 or more rooms are automatically directed to a special sales office that arranges discounts of 10 percent to 35 percent and other perks. With the events offered through Magical Gatherings, you'll most likely be in the company of other small groups. But if you hit the 10-room mark, dinners and special events can be private. Also, while Magical Gatherings are limited to a handful of activities and programs, the sky is the limit with larger groups. Disney lets you throw parties in cool places like the underwater VIP room at EPCOT's the Living Seas. Or you can rent out an entire attraction for a private dinner--after the giant boulder chases Indiana Jones across the stage at Disney-MGM Studios, your group is invited onstage for dinner, and the rest of the show is performed right around the tables. Prices for special group events are negotiated, and they fluctuate depending on season and demand, but dinners cost around $50 and up a person, dessert parties start at $30, and character breakfasts (with Mickey, Goofy, Donald, or others in attendance) begin at $11 for kids 3 to 11, $18 for adults. 407/934-7639, disneyworld.com/magicalgatherings.

Today's big-ship cruises have something for everyone, from black-tie dining to Ping-Pong tournaments. It's also the easiest reunion to plan. Seating everyone together for all meals is no problem, though just doing a group dinner daily is usually enough. Ships arrange special events, sometimes for free--private cocktail hours, photo sessions, and more. And they all give a discount: The standard tends to be one person free for every eight cabins.

"The biggest mistake is ending up on the wrong ship," says Rick White, of White Travel, a cruise specialist in West Hartford, Conn. "If you're couch potatoes, you want an easygoing destination, like the Caribbean. If everyone's active, think about Alaska or maybe Europe." Summer is family cruising season, so it's unlikely you'll be overwhelmed with senior citizens or singles looking to party, but ask your travel agent about the ship's atmosphere regardless. (For that matter, ask your agent about everything. Travel agents book nearly all cruises, and they should know the ships.) Three- or four-night sailings are popular because they cost less in terms of money and vacation time than the standard weeklong cruise.

All cruise lines are accustomed to handling groups, though a few have particularly attractive selling points for big families. Carnival Cruise Lines includes "fun points" that groups can use for a private cocktail party, poker chips, or photo sessions with a pro. Through its Royal Reunions program, Royal Caribbean arranges onboard scavenger hunts and trivia contests for groups--and the ships have rock-climbing walls, ice-skating rinks, and teen-only nightclubs. Groups on Holland America ships score extras such as unlimited soft drinks and free snorkel gear. Family favorites on Princess Cruises include movies on a 300-square-foot screen by the pool, as well as a 24-hour buffet.