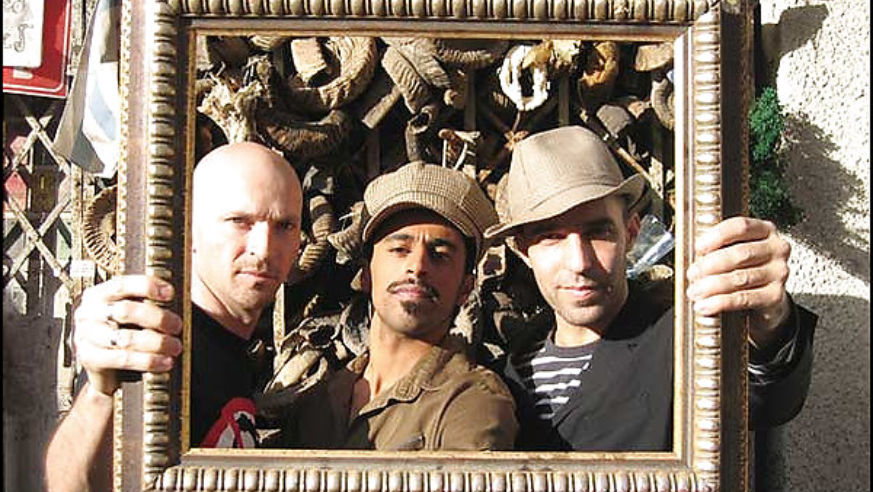 On the eve of releasing their 'Nu Med' album, Balkan Beat Box founders Ori Kaplan and Tamir Muskat talk about collaborating across national lines, the songs that remind them of Israel, and why their raucous sound is so irresistible.

It's not easy to pin down the members of Balkan Beat Box, who've won a global following for their eastern melodies injected with fresh attitude and beats smacking of hip-hop and electronica. "We have crazy fans everywhere," says saxophonist Ori Kaplan. "Our music seems to be a new soundtrack for this new generation that's open-minded and wants to explore new things."

The band performs with Yemeni MC Tomer Yosef and a rotating cast of characters—from flamenco dancers to a Macedonian clarinetist—giving the concerts a freewheeling, carnival feel. (The band brought a 40-person samba troupe to Central Park's Summer Stage, and at a recent show in Germany, a Bulgarian choir singer popped up in the balcony.)

This year's frantic schedule of 120 shows in 120 cities has kept Kaplan bouncing from one Brooklyn sublet to the next. He and drummer Tamir Muskat, both first-generation immigrants raised in Israel, have been a part of New York's "downtown music mash," as Muskat puts it, for more than a decade. The two formed Balkan Beat Box in 2004.

"There's something in this city that brings people from all over the place to live fairly in peace with each other; that's always a good start for interesting collaborations," writes Muskat, currently back in Tel Aviv.

For the band's second album, Nu Med, they tapped three Serbian gypsy musicians living in Queens (hence the title of one song: "Gypsy Queens") and Dunia, a Syrian singer with "real, raw talent" whom Kaplan heard at a local nightclub.

"This is a very rare collaboration between Israelis and Syrians," says Kaplan, who brought Dunia into the recording studio in the Williamsburg neighborhood of Brooklyn. "We put on a very basic beat, and she just wailed on it, and we sat down and wrote some lyrics, and she was very excited to do something different."

They wound up with the song "Habibi Min Zaman," whose "old sound" reminds Kaplan of strolling through an outdoor market in Jaffa, a seaside town near Tel Aviv.

"Almost every song can take us somewhere," adds Muskat. "Something in your musical tone is always connected to what you grew up with." Both Muskat and Kaplan feel that their melting-pot sound works because it's a natural reaction and an organic process for them, thanks to their experiences in Israel.

Kaplan studied classical clarinet as a child, but also took klezmer lessons with a Bulgarian living in Tel Aviv. He remembers coming home from lessons and watching the national Palestinian orchestra playing on television. It's one of countless stories of such cross-cultural encounters through music.

"We used to hang out in a punk rock club, and when we had the munchies, we'd go to the next restaurant, a Turkish-Greek restaurant with live performers, and then we'd go back to the club," recalls Kaplan.

Muskat, who is of Romanian descent, had childhood friends whose families were from Turkey, Russia, Iraq—"any country from the Mediterranean rim and Eastern Europe that you can imagine."

The two musicians grew up with the region's political turmoil, too, and politics have a way of coming up, whether in their own conversations, among some of their concertgoers, or when drawing up a touring schedule. Muskat and Kaplan both voiced the desire to perform in Ramallah, a city in the Palestinian territories, as well as in Lebanon and Iran, all places which are off-limits for political reasons.

Kaplan acknowledges that he and Muskat can't completely separate their hopes and feelings from their music.

"People see Palestinian artists with Israelis or Arabs together on stage and emanating so much happiness that it really makes an impact, perhaps more so than a thousand speeches by politicians," says Kaplan. "We maybe have a utopian vision, but we're supposed to play with these visions."

How Jacob Edgar Got His Awesome Job at Putumayo

On the Road with Gerry Beckley of America

Q&A with Andy Palacio of Watina

Eating on Tour with Franz Ferdinand