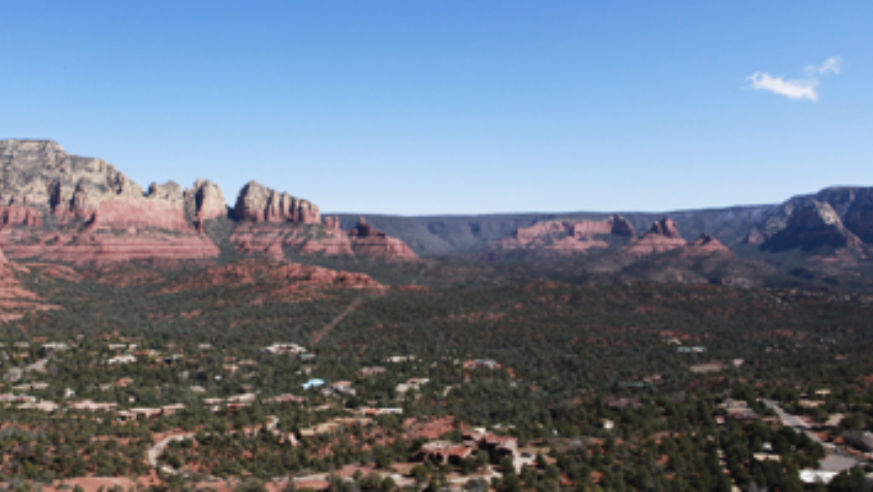 I recently got back from a trip through the American Southwest with Budget Travel’s associate photo editor, Whitney Tressel. Along the way, I was struck by one persistent question: how in the world do you find those amazing vantage points for postcard–worthy sunset shots, mountain vistas, and skyline panoramas?

With apps and guidebooks and websites, you’re never more than a few clicks away from a restaurant recommendation, hotel pick, or list of can’t–miss attractions. But I’ve never managed to find a similar source for views. During our trip, we picked up a few tips that helped Whitney get those beautiful shots (which you’ll be seeing in issues later this year!).

Talk to the person at the local camera shop: Those people selling you memory cards and camera cases? Turns out many of them are amazing photographers! Don’t miss the chance to pick their brains. While in Sedona, Arizona, we stopped into Rollie’s Camera Shop for supplies. We casually mentioned that we were looking for great views, and Jennifer behind the counter gave us a guidebook’s worth of invaluable information, including an easy hike that led Whitney to 360 degree views of the city and its stunning red rocks. We would never have found it on our own without her help. (In case you’re wondering, the hike is called Sugarloaf Trail and you can find it just off of Coffee Pot Drive!)

If you see people lined up on the side of the road, STOP!: This one might seem like a no–brainer, but it’s worth mentioning. If you see cars lined up in a seemingly strange place (a gravel shoulder on the side of a scenic byway?), don’t be afraid to poke your head out the window and ask why people are stopped. Often, you won’t see the goods from the road. But a short walk from your parked car, just beyond those trees, you might find some amazing vistas. Make sure to explore.

Look at postcards and then tweak the shot: We know you don’t necessarily want an exact copy of those tired postcard shots. But let them be a rough guide for you. You can often get a good sense of general starting points based on what you’re seeing. Check the caption on the back for any details on the location or just use context clues to figure out the general vicinity—the shot was taken from the south or from a hill to the north or from a balcony a few stories above the beach or from Broadway and 49th. Follow those general guidelines and then play with light, time of day, and angles to make the shot your own.

Don’t skip residential areas: It might feel weird at first taking pictures of people’s houses, but they can often give you some of the most iconic shots of a city landscape. As we traveled through Santa Fe, some of the most traditional adobe structures in town were not in the main city plaza. Instead, we followed winding paths up dusty hills and found some beautiful scenes in some of the least flashy parts of town—the suburbs!

Do you have any go–to plans for finding the best views in a new city?

25 Most Photographed Places On Earth