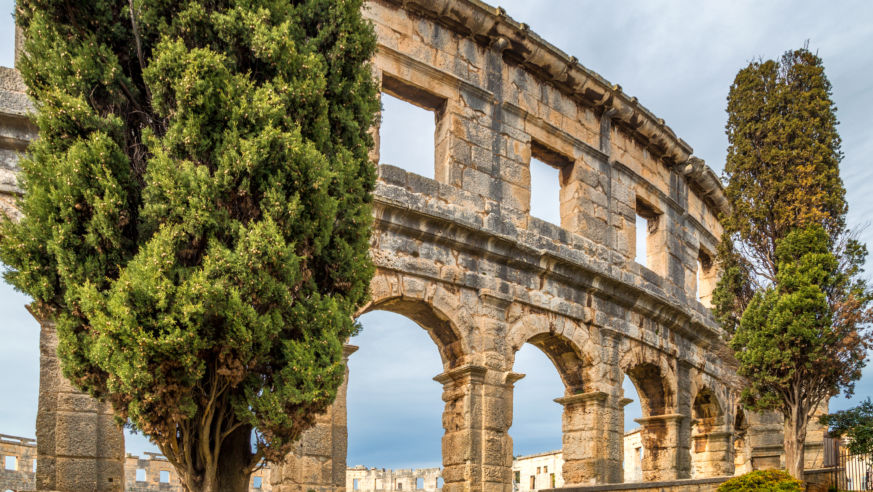 Many of Europe's top destinations are frequently overrun with visitors. These are our favorite alternatives.

Europe’s top cities groan with museums, wine bars, hotels and plenty of tourists. But happily, the continent is also awash in destinations that promise more elbow room and less spending. From the source of Bordeaux wine to the birthplace of the Beatles, from tulip-flecked towns to island escapes, here are the spots too often eclipsed by their big-name neighbors that beg to be explored.

Instead of Dubrovnik, try Pula

Located in the far north of Croatia, Pula was never cast in Game of Thrones like Dubrovnik but it certainly looks the part: the city’s architecture is composed of several surviving ancient Roman structures, including a 1st-century amphitheater. In the summer months, the ancient mammoth hosts concerts and a film festival. The space that once served as a Roman forum in antiquity is now Pula’s bustling main square, hemmed in by restaurants and cafes; grab a coffee within eyeshot of the neighboring Temple of Augustus, dating back to roughly 27 BC. Beach-dappled peninsula Verudela and the verdant Brijuni Islands (declared a national park) are tempting day trips.

Instead of Santorini, try Milos

Home to the iconic Venus de Milo statue, this Aegean island shimmers with a beauty all its own. Over 70 beaches rim the shores, from family-friendly Firiplaka to elusive Tsigrado (reaching its turquoise waters involves shimmying down a rope ladder). Stroll through village Klima with its punchy multi-colored doors before lunch at beachside tavern Medousa. Later, watch the sunset from the Panagia tis Korfatissas church, whose dazzling viewpoint encompasses the Cape Vani gulf and the islet of Antimilos. For a good dose of antiquity, seek out the island’s ancient Roman Theater from the Hellenistic Age.

Instead of London, try Liverpool

The northwest port metropolis of Liverpool boasts an impressive resume: besides birthing The Beatles, it reigns as a UNESCO World Heritage City, is the home base of six-time European-cup football champion Liverpool FC, and has one of the richest collections of museums in Europe. Waterfront Albert Dock brims with cultural hotspots, including art gallery Tate Liverpool, Merseyside Maritime Museum, and immersive experience The Beatles Story for Fab 4 devotees. Eating well on the cheap is a cinch, too. Local pub the Baltic Fleet shines in cellar-brewed ales and unfussy breakfast plates, while Liverpool institution Kimos dishes out Middle Eastern and North African fare. When the sun ducks down, the Ropeswalk district thumps with live music.

Instead of Barcelona, try León

Barcelona may be known for its splashy architecture, but León more than holds its own, with a skyline thick in Gothic and Romanesque-style buildings. Gaudí made his mark here, too, with modernist masterpiece Casa Botines. The soaring Basilica de San Isidoro and 13th-century Catedral de León keep watch over the city; duck inside the latter and marvel at its vidrieras, or stained-glass windows. In the evening, peruse the city’s “old town,” or former medieval quarter, also known as the Barrio Húmedo. Translated as the “wet neighborhood” thanks to its slew of taverns, bars, and restaurants, this slice of León enjoys a hallowed tapas scene.

Instead of Paris, try Bordeaux

An exceptional gastronomic culture is enough of a reason to flock to Bordeaux. The city’s unceasing viticulture tradition and myriad vineyards have made it arguably the wine capital of the world; paired with an unparalleled dining scene, ranging from staunchly traditional French restaurants to fusion to food trucks, locals and tourists alike are merrily well fed and watered. Not sure where to begin? Bordeaux’s tourism board has debuted a downloadable wine guide, and the city also hosts museum Cité du Vin, dedicated exclusively to the grape. The Musée des Beaux Arts and CAPC Musée d’Art Contemporain, meanwhile, pamper art enthusiasts.

Instead of Amsterdam, try Leiden

Wedged in between Amsterdam and the Hague, the city of Leiden proves delightfully Dutch: think gabled houses, crisscrossed canals, and a smattering of windmills. Its art game is strong, too, as both the birthplace of Rembrant (look for various tributes to the artist around the city) and the home of Museum De Lakenhal, which displays paintings from the Dutch Golden Age. On Wednesdays and Saturday, hundreds of stalls set up shop in the city center, hawking everything from flowers to gouda cheese. Sunny days, meanwhile, call for a visit to the leafy green sprawl of the botanical gardens, where the very first tulip bulbs in the Netherlands were planted in 1593.

Venice’s strife with mass tourism has raged for years; if a budget-friendly, serene holiday is what you’re after, swap the floating city for nearby Bassano del Grappa. A little over an hour from its noisier neighbor, this medieval hamlet sits at the foot of the Venetian Prealps and gazes out onto the Brenta river. Wooden bridge Ponte degli Alpini gives a lovely view of the town, made up of craggy mountains and charming arcaded streets. Unsurprisingly, grappa, a nostril-clearing distillation made from the discarded skins and pulp of wine-making, originates here. Sample some at local favorite Grapperia Nardini. If Venice is an absolute must, save it for a day trip; connecting trains run daily.