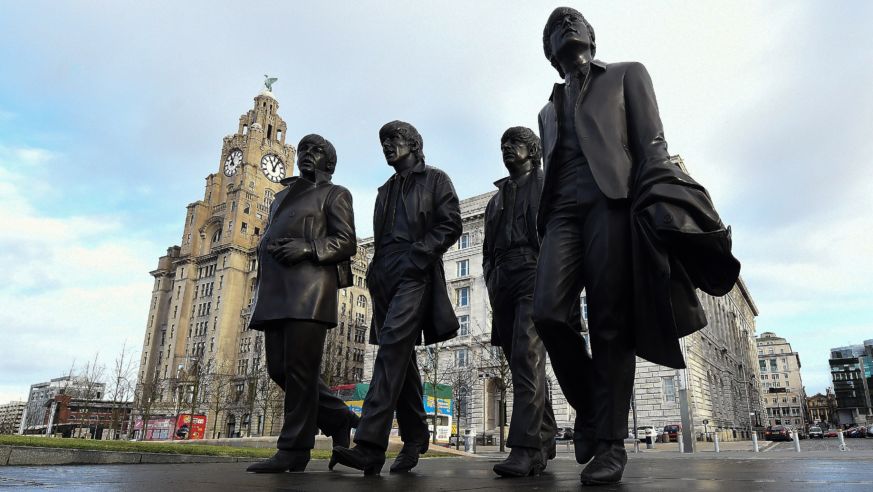 To truly get a sense of who the Beatles were, you'll have to go back to where it all began – Liverpool.

The Beatles had a worldwide influence, and there’s no shortage of places to follow in the footsteps of John, Paul, George and Ringo. Hamburg’s Reeperbahn is where the Fab Four honed their skills; New York has the Ed Sullivan Theater; and of course, London has Abbey Road Studios and its iconic crosswalk. This itinerary takes in all the top sites, exploring the birth places of John, Paul, George and Ringo.

"There are places I’ll remember…"

John Lennon, Paul McCartney, George Harrison and Ringo Starr are celebrated all over the city, but perhaps nowhere as much as the banks of the River Mersey. Start your tour on the waterfront, where a larger-than-life-size statue of the lads is nestled in the shadow of the iconic Royal Liver building, between the Titanic Memorial and Museum of Liverpool.

From there, it’s just a few hundred feet to the Royal Albert Dock. This UNESCO World Heritage site is now an immensely popular multi-use tourist attraction which includes the Fab4 Store, the Fab4Cafe and the Beatles Magical Mystery Tour. But the biggest attraction is The Beatles Story, perhaps the best Beatles-only exhibition in the world. The museum is chock full of objects and memorabilia, as well as a children’s discovery zone. It’s the perfect place to start your exploration. 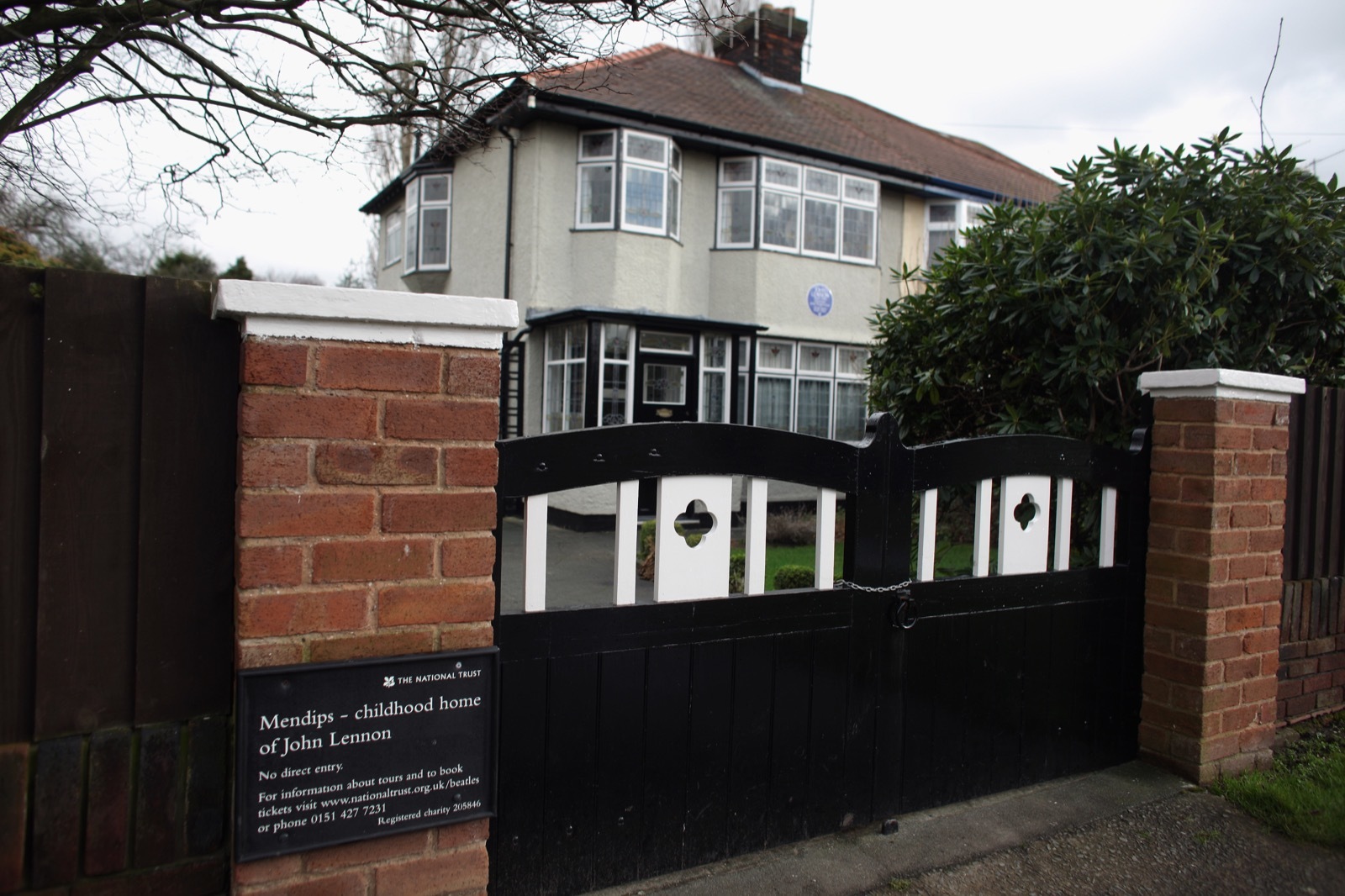 "Get back to where you once belonged…"

The Beatles grew up in separate parts of Liverpool, so you’ll want to take a bus to do most of your touring. Ringo grew up at 10 Admiral Grove in the Dingle area, in a row house that was slated for demolition a few years ago until the public outcry put an end to those plans. George was the only Beatle who wasn’t born in a hospital—he was born in his childhood home at 12 Arnold Grove (a name he used as a pseudonym later in life) in Wavertree. Paul’s musical family lived at 20 Forthlin Road in Allerton.

When the guys skipped school to play, they sometimes practiced at John’s house "Mendips," located at 251 Menlove Ave. in the Woolton area. John’s guardian, his Aunt Mimi, didn’t like it much ("The guitar’s all right for a hobby, John, but you’ll never make a living at it," she once said). Still, the semi-detached house with the sunny entryway was centrally located and probably the nicest of all the houses. Now it’s an English Heritage site.

In fact it was close to Mendips—at St. Peter’s Church, on Church Road—where John’s skiffle band The Quarrymen was playing when he was introduced to Paul McCartney on July 6, 1957. Paul was a better musician than most of the guys in the group, and it wasn’t long before John invited him to join. A short time later, they changed their name to the Beatles. Speaking of names, there’s a gravestone in the churchyard with the name Eleanor Rigby. Inspiration, or coincidence? 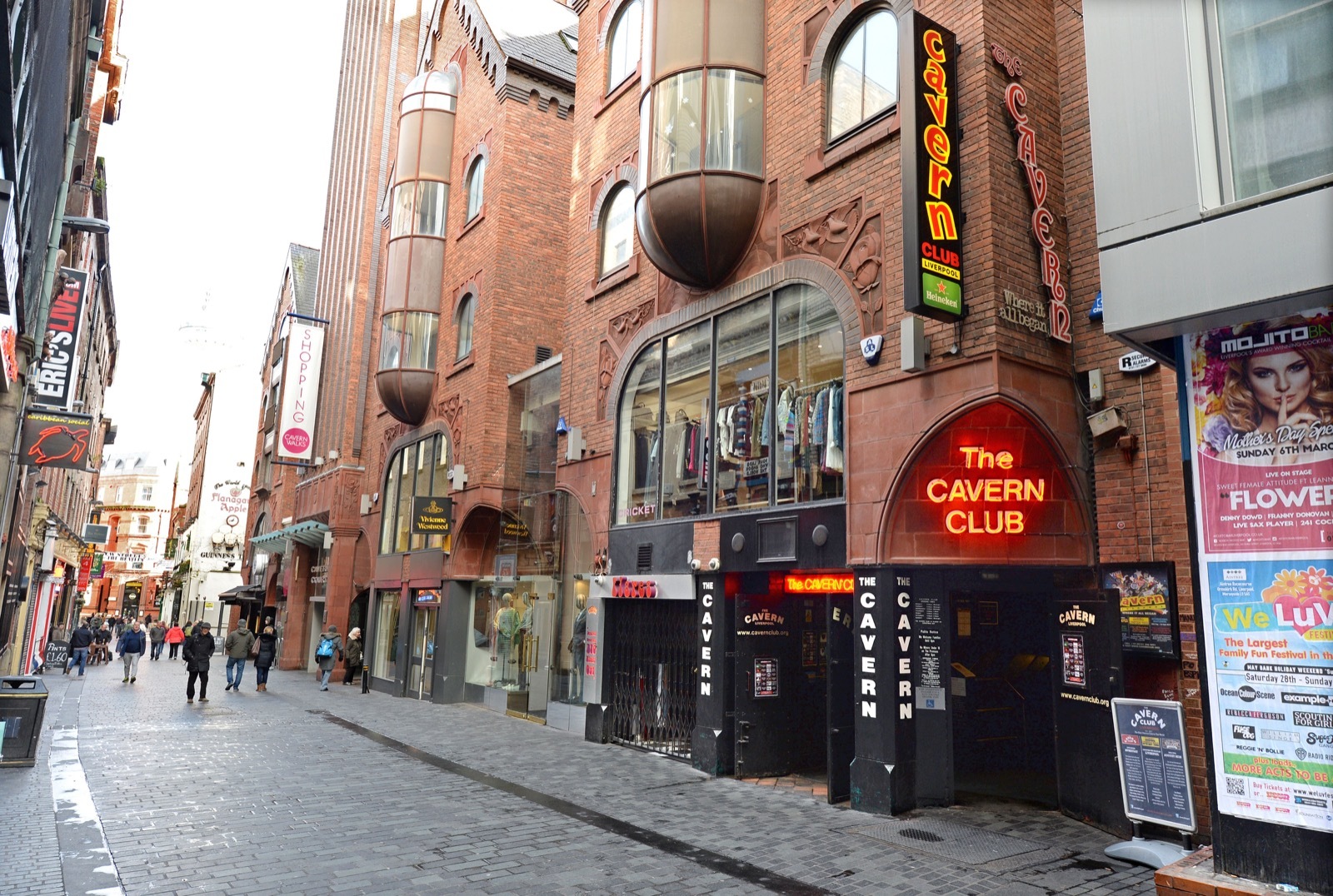 "Listen to the music playing in your head…"

The Beatles played all over the city before hitting the big time. The Casbah Club (tours available by appointment) was a coffee shop in the basement of original drummer Pete Best’s house at 8 Hayman’s Green in West Derby, and a frequent haunt for the band. The "Rainbow Stage" they played on there was little more than a nook. It’s a far cry from the Litherland Town Hall, where Beatlemania probably began. Now it’s a health center on Hatton Hill Road, but in 1961 it was where the band played its first gigs after returning from Hamburg—and quickly established they were the best draw in the city.

Of course, the most iconic site—indeed, it could very well be the most important and famous music venue in the world—is the Cavern Club. The Beatles played the stifling cellar at 10 Mathew Street a staggering 292 times and it was here they were discovered by manager Brian Epstein. In fact, Mathew Street is the center of the Beatles experience for any visitor to Liverpool. In addition to The Cavern, there’s a statue of John Lennon, a couple of Beatles-themed bars, gift shops and tours, as well as The Grapes—the pub where the boys drank between sets at the alcohol-free Cavern. 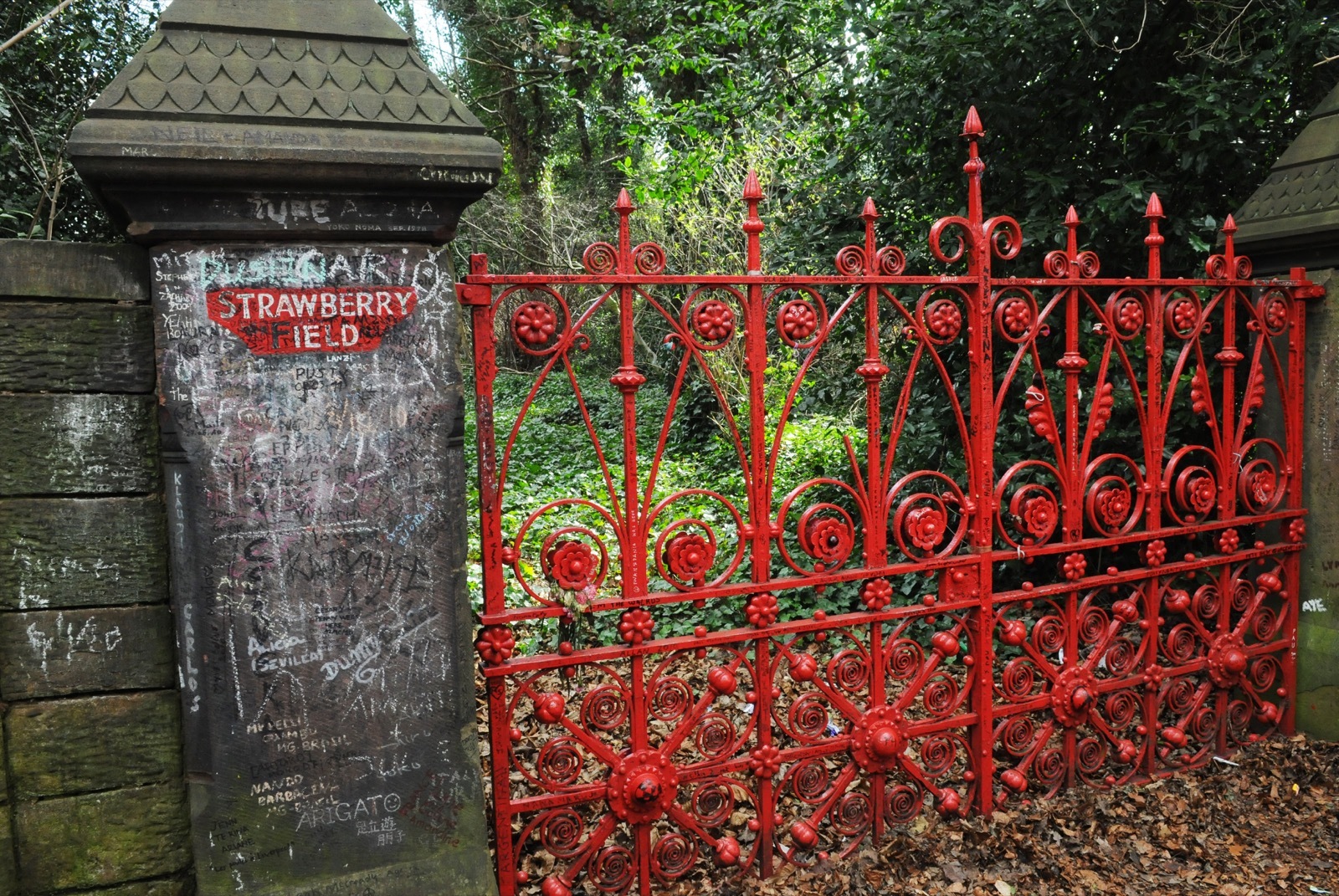 "Penny Lane is in my ears and in my eyes…"

You don’t have to dig too deep to find the places that had the most direct inspiration on The Beatles’ music—they’re name-checked in some of the band’s most famous songs. For instance, Penny Lane is a real street in Liverpool. Where it meets Smithdown Road, there really is a roundabout with a bus stop shelter in the middle (in fact until recently the "shelter in the middle of the roundabout" was a Beatles-themed bistro). There’s even a barber shop on one side of the square.

If "Penny Lane" was Paul’s typically rose-colored look back at the places and people who filled his Liverpool childhood, for John it was bittersweet nostalgia inspiring "Strawberry Fields Forever." The song was named for a Salvation Army orphanage in Beaconsfield Road—just around the corner from Mendips. John and his friends would play in the wooded grounds, and they became a place of freedom and imagination. The old building is long gone, but the wrought-iron gates are still there and have been attracting Beatles fans for generations. 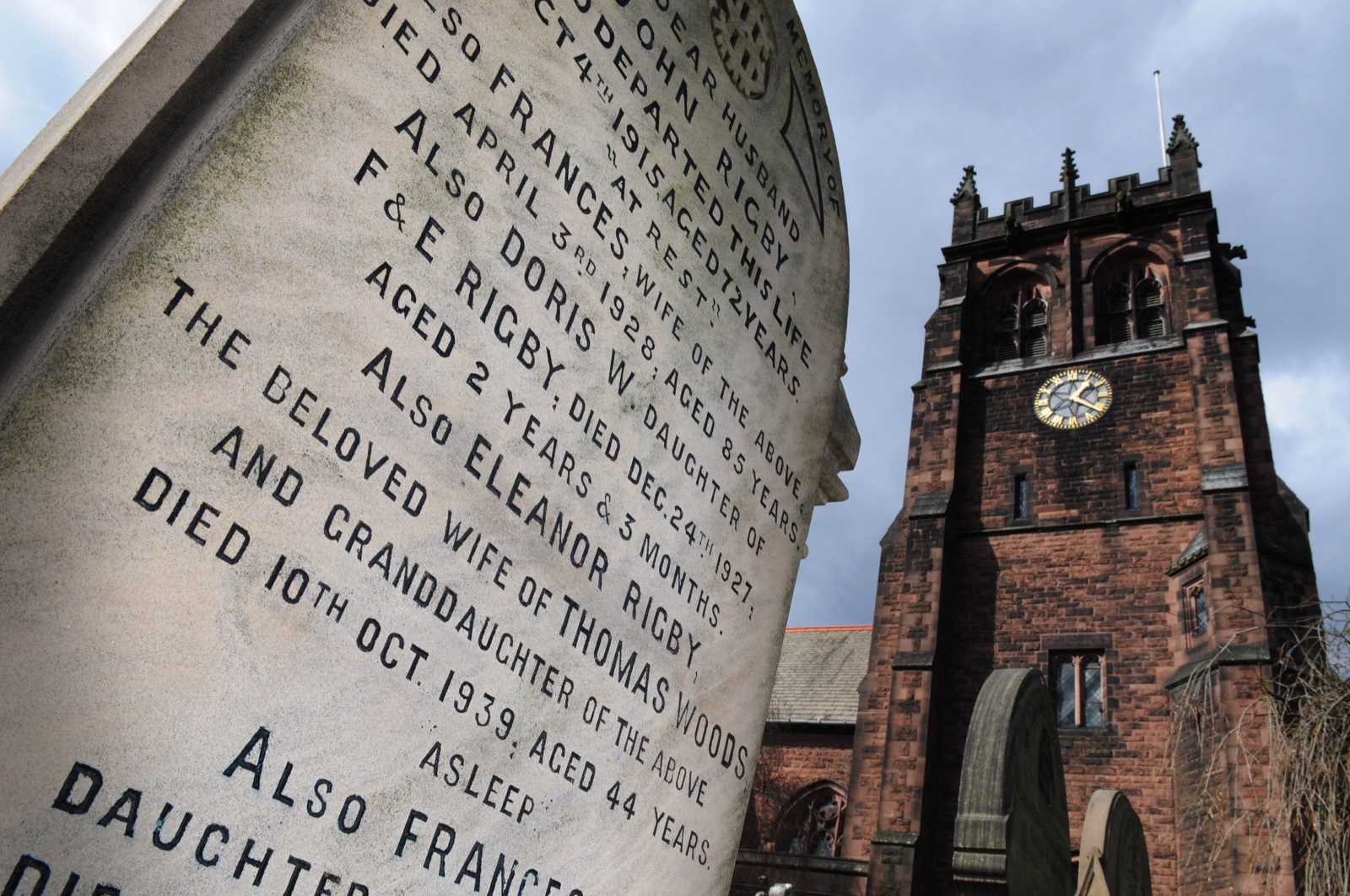 It doesn’t get much better for a Beatles fan than Hard Day’s Night Hotel, with sculptures of the lads on every corner of the façade and more than 100 individually-designed rooms (all with Beatles themes, naturally). It backs directly up to Mathew Street, for easy access to the Cavern and other sites. The YHA Albert Dock hostel is a budget-friendly option with a Beatles theme as well. To get around, pick up a reloadable Walrus Card from Merseytravel for easy and inexpensive bus access. If you want to leave the planning to someone else, try the Beatles Fab Four Taxi Tour.