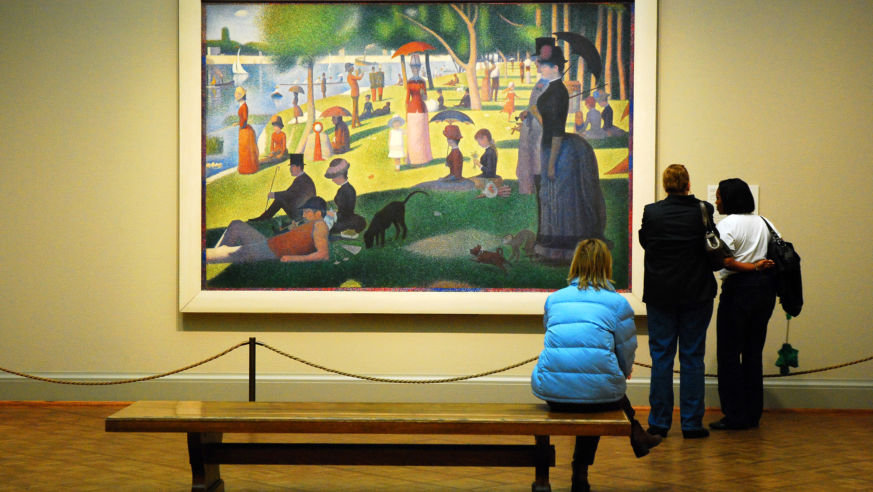 Spend a Sunday—or any other day of the week—in the park with Georges Seurat at the Art Institute of Chicago.

Any season is the right time to visit Chicago for world-class bites, sights, and delights.

An abundance of choices is a big part of why we love Chicago. It’s a fast-paced, year-round town that offers a spectacular array of things to do—from sightseeing, music, and culture; to famous gastronomy and sometimes-quirky history. So to help pare down the choices, here’s a rundown of the can’t-miss spots for new visitors to Chicago, along with some of the latest additions and emerging areas destined for greatness.

The richness of Chicago’s architecture cannot be overstated. The cityscape has seen many waves of building and design trends, some of them dating back nearly two centuries. But ever since the Great Chicago Fire of 1871, the Windy City began rebuilding according to the trends of each decade, including City Beautiful, Beaux-Arts, Art Deco, Arts and Crafts, and many revival styles. It helped to have some of the world’s top architects perfecting their crafts there, including native Chicagoan Frank Lloyd Wright, and the “father of modernism” Louis Sullivan. Today, 21st-century architects continue to earn fame by adding their most daring visions to the skyline.

Fortunately, the Chicago Architecture Center exists to share the city’s best sights by river cruise, bus, bike, or foot. Each tour runs about 1.5 hours and start at $26, and you can choose from dozens of themes, be it a city overview or niche interest. also offers architecture tours, most of them on foot and starting at $30 for about two hours.

But if you want to take in Chicago’s architecture all in one lofty panorama, buy yourself a CityPASS ($108 for five attractions) for skip-the-line access to the observation decks of both the Willis Tower (called the Skydeck), and the John Hancock Building (called 360 Chicago).

The beauty of a good museum is that it’s there to inspire and delight visitors in any season. The CityPASS is a smart way to visit several of them (and save time bypassing the lines), including the marvelous Shedd Aquarium, natural-history Field Museum, inspiring Museum of Science and Industry, and Adler Planetarium (America’s first planetarium).

Your CityPASS includes entry to the Art Institute of Chicago, one of the world’s top art museums, with a magnificent permanent collection and brilliant temporary exhibits, all housed in a complex that combines classic and modern architecture.

Add to your arts adventure at Streeterville’s Museum of Contemporary Art where exhibits will introduce you to stimulating works created between the 1920s and today. The National Museum of Mexican Art, with free admission, is well worth a trip to the Lower West Side to behold colorful, rich art and events all year. (Don’t miss bites at nearby 5 Rabanitos taqueria.)

The Loop is Chicago’s downtown area, generally within the elevated-train “loop.” (FYI: the rail system here is called “the L.”) Within the loop you’ll find many of the city’s grand towers and attractions, including the 319-acre Grant Park along Lake Michigan. There you can check out Buckingham Fountain and Millennium Park—home to Anish Kapoor’s beloved Cloud Gate (the shiny, giant stainless-steel “bean”). The park also hosts year-round food and arts festivals; ice skating and rock climbing in Maggie Daley Park; and concerts and screenings at Pritzker Pavilion, the bandshell designed by Frank Gehry.

With many great hotels occupying the city’s beautiful buildings, you can enjoy the city’s architecture in an intimate way by lodging in them. On the Loop’s north end, the Swissotel Chicago sits riverside as a sleek triangular high rise, with views of the Navy Pier, Lake Michigan, the inner Loop, and Grant Park. In addition to its comfy accommodations and polished service, the Swissotel is conveniently beside the Lake Shore Drive and the River Walk, for easy access via car or on foot.

Next door to Swissotel is the lovely, undulating Aqua building, wherein you can book your room at the Radisson Blu Aqua Hotel, and swim in the elevated pool. Head out to the hip and happening West Loop (aka the Fulton Market District) to lodge in the brand-new Hoxton Hotel. To the south, check into the boutique Sophy Hyde Park for proximity to Robie House, the Frank Lloyd Wright masterpiece recently named a UNESCO World Heritage Site.

When it comes to dining, there’s far more to Chicago than steak, hot dogs, and deep-dish pizza, especially outside the Loop. In Ukrainian Village, head to Split-Rail for the best fried chicken in town, plus tasty sides and unique craft cocktails (don’t miss the blue sparkle of the “tiki death punch”). Head north to Lake View for a tasty brunch with unlimited cocktails at Barcocina, where you can lounge on the big outdoor patio.

A few blocks away in East Lake View, find the city’s finest cheese, charcuterie, and other dishes at Bar Pastoral, a restaurant spinoff of next door’s Pastoral artisanal market. North Broadway is lined with notable eateries, like Ceres’ Table, serving regional Italian cuisine with seasonal ingredients. In Boystown, discover how delicious all-vegetarian dining can be at the adorable Chicago Diner, famously “meat-free since ‘83.”

If classic dishes are calling, Pequod’s Pizza in Lincoln Park is the go-to for locals who love deep-dish; or try an upside-down version at Chicago Pizza and Oven Grinder.

No matter where you dine, however, enjoy breakfast at Lou Mitchell’s Restaurant & Bakery in the West Loop. The old-school diner opened in 1923, and is the self-described starting point to Route 66, serving unbeatable omelets, biscuits, pancakes, benedicts, and more, until mid-afternoon daily. But even beyond its famous food and sample donuts and other bonus treats, Lou Mitchell’s represents something unique: It’s a real-deal Chicago enterprise that feels timeless, making both its food and atmosphere well worth savoring.