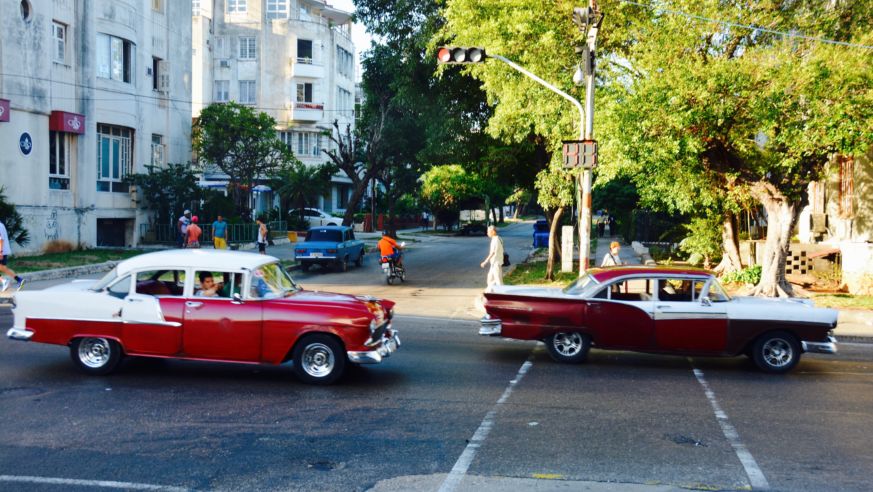 From the friendly streets packed with live music, vintage cars, and 18th-century buildings to the gorgeous beaches and delicious ice cream, my family’s affordable getaway to the once-forbidden island of Cuba was a hit, not only with the adults but also with the little ones.

"You brought your kids to Cuba?” The question was repeatedly posed to us upon our return, a bit of incredulity mixed with a slight tinge of envy.

Yes, between Christmas and New Years of last year, we took our well-traveled 5- and 7-year-old children to Havana for a five-day trip. Affordable, safe, filled with friendly people, live music spilling out onto nearly every street corner in old Havana, and stunning beaches a stone’s throw away, this city was surprisingly perfect for a family vacation.

Since November 2016, it has been extremely easy to simply hop on a plane to Havana from the U.S. You can get your visas at your check-in counter. There are three direct flights a day from New York City, priced as low as $250 a ticket. As long as you go for one of the 12 approved types of travel, there are no other restrictions. We went under the auspices of a “people-to-people”  trip, in which our goal was to meet Cuban people and have the kids learn some Spanish. That was not a challenge. Cubans are incredibly warm and friendly, and it’s easy to make new friends with a couple of smiling moppets in tow.

A bit of pre-travel advice: Before leaving for Cuba, it’s extremely useful to exchange your U.S. dollars into either Canadian dollars or Euros. U.S. dollars are hit with an additional 10 percent exchange penalty that other currencies are not. There are actually two currencies in Cuba: Tourists use the CUC, or convertible peso;  Cubans use the CUP, or Cuban peso, pegged roughly at 25 CUP to 1 CUC. In general, tourists do not have access to Cuban pesos, unless they get a local to swap some notes on the sly. And cash is king: U.S. credit cards and ATM cards are still not accepted in Cuba. Unless you have a foreign credit card or bank account, you need to bring a large amount of cash with you.

Havana's splendors have been described by great writers over the years, but that doesn’t prepare you for the sensation of actually walking its streets. It's a full-frontal assault on all five senses. You’ll love feeling the tropical breeze caress your face while viewing grand 18th-century architecture and vintage 1950s American autos trapped in time, hearing the sounds of Son and Charanga emanate from the musicians and radios on seemingly every street corner, the smells of Havana's finest cigars wafting through the air, while sipping on the best mojito you've ever tasted.

Back in the 1950s, Havana was Paris in the tropics, one of wealthiest cities in Latin America. Now it's the world’s greatest urban paradox, simultaneously modern and a trip back in time. The iconic old American cars cruise the street in equal numbers with new Toyotas and 1970s Soviet Ladas. While the Edsel may be found only in car shows and museums in America, it's a common sight on Havana's streets, as are Studebakers, '57 Chevys, and almost every other classic automobile. Our kids preferred to get around Havana in bright yellow, three-wheeled coconut shaped rickshaws, called “coco taxis.” Be prepared for a bumpy ride.

Ernest Hemingway's ghost haunts every corner. He's so revered in Cuba, you'd think he was part of the Revolution. At least three bars claim to be his "favorite drinking place,” and considering Hemingway’s reputation, I suppose he could have spent enough time at each of the three bars to justify the claim. There are lines out the door at the Bodeguita del Medio on Empedrado, where Hemingway drank his mojitos. For a proper daiquiri, he would head up Calle Obispo to El Floridita. Both spots are must-visits for Hemingway fans and cocktail lovers. Finca Vigia, his residence on the outskirts of town, has been preserved as a museum exactly as he left it in 1960.

Most hotels in Havana are actually rather expensive, and usually booked months in advance by package tour groups. Thankfully, Havana has a well-established and government-sanctioned program of private homes and rooms to rent, called casa particulares. Since 2015, the vast majority of these can be booked on Airbnb.  A room in old Havana can be had for about $40 a night. We splurged and rented a two-bedroom apartment in a high rise on the water for $90 a night in the heart of Vedado, in the newer part of town. Our apartment overlooked the Jose Marti Anti-Imperialist Platform, which prominently features a statue of Cuban hero Marti holding a young Elian Gonzales, with a reproving finger pointing at the U.S. Embassy across the plaza.

Well-stocked supermarkets don’t really exist in Havana. You’re at the mercy of what’s in stock, which is generally very little. While we was there, there were shelves full of Panettone and Gerber baby food, but very little in the way of eggs, fresh fruits, and vegetables. For an extremely satisfying breakfast, however, the Hotel Capri in Vedado has a vast and sumptuous buffet, open to the public. For just $12 per person ($6 for kids), a feast awaits that can fill a belly for half the day. Kids can have their fill of fruits, eggs, pancakes, cereal, and even donuts.

Just as some Cubans have been allowed to rent their apartments for lodging as casa particulares, others have been allowed to operate restaurants out of their homes. These in-home restaurants, limited to 12 seats, are known as paladares and can be found throughout the city. In fact, paladares now outnumber official state restaurants. A tasty dinner including drinks can be had for $10 to $15 per person, and every cab driver will show you their favorite special “secret” paladar if you ask.

SMOKE (IF THAT’S YOUR THING)

Every souvenir hawker and tout in old Havana will offer to sell you “real” Cuban cigars, cheaply. While they may be indeed Cuban, and cigars, they are poorly made knockoffs of the stogies that made Havana famous. For the real deal, stop by one of the Casa de Habano stores found throughout Havana. They have every brand of Cuban cigar imaginable, and you can be assured that you’re not buying counterfeits. After teaching my kids since birth that smoking is disgusting and bad for them, I really had no explanation for why I was bringing home a box of Montecristos. I’m not sure if they bought my “a cigar is a sometimes thing” excuse.

Hugging the waterfront in old Havana is a wonderful children's park and playground, replete with aging carousels, see-saws, and newer bouncy castles. It’s enough to keep the kids entertained for a few hours.  Convertible pesos are not accepted for the admission fee, so if you want to visit, you need to find a local parent and trade them some CUCs for CUPs. It’s about $0.15 to enter the park, and admission to the enormous bouncy castles and slides are another $0.15.

In the center of a leafy park in Vedado, an enormous mid-century modern UFO rises above the trees. Lines of locals stretch down the block on all four sides of the park. The UFO does not take trips to Miami, but houses the famed Copellia ice cream parlor. Established by Castro in the early 1960s, Copellia made ice cream accessible to the common folk. For about 20 cents and an hour’s wait, you can get an enormous bowl of Havana’s best Ice cream. For tourists who don’t want to wait and don’t mind paying a little more, there’s an opportunity to skip the line and go to a separate gringo section, where the same ice cream can be had for 10 times the price.

A 20-minute cab right out of town brings you to the gorgeous beaches of Playas del Este, a great day trip. A few hotels dot a 15-mile stretch of white-sand beaches, but it’s largely free of development. For $25 (half-price for kids), you can buy a day pass at the Hotel Atlantico in Santa Maria del Mar, which includes a buffet lunch, and use of the hotel’s pool and facilities. It’s a rather aging, communist-style hotel, mainly filled with foreign package tourists and complete with the requisite overeager activities staff giving poolside salsa and rhumba lessons.  The kids loved it.

I should note that Cuban travel is not for everyone. Those accustomed to five-star accommodations and meals and streets lined with fancy boutiques may find themselves disappointed. Folks willing to forsake a few creature comforts for a unique experience a mere 45 minutes from Florida will find Cuba’s charms irresistible. My kids’ days of “people-to-people” experiences left them with beloved memories. As for their newfound knowledge of Spanish? The only word that seems to have lodged in their brains is helado.  Ice cream, of course.