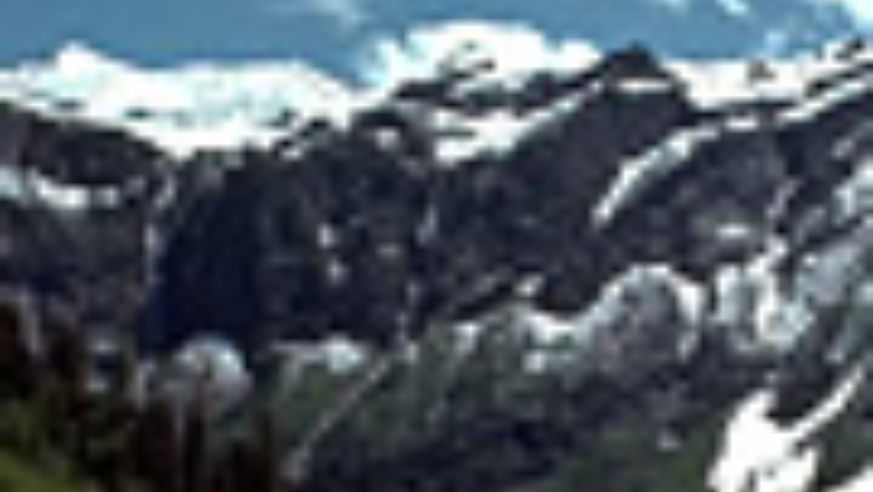 Montana's Glacier National Park spends most of its year under heavy snow. Visit in June, when the park's meadows are in bloom and the moose are out in force.

There's no predicting the exact day that Glacier's famous Going-to-the-Sun Road will open. Much of the 50-mile road, which zigzags up and over the tree line through the heart of the park in northwestern Montana, remains inaccessible to cars at least until mid-May. It takes most of spring to clear the snow that blankets the high passes. Chances are that the road will be totally open for the summer by late June. Park crowds, however, don't arrive in full force until Fourth of July weekend. Peak lodging rates don't surface until mid- or late-June either—both inside and outside the park you typically pay 10 to 20 percent less compared to July.

The weather at Glacier can turn nasty without much notice. Even after the Going-to-the-Sun Road opens in its entirety, rangers are sometimes forced to close it for a day or two because of avalanches, rock slides, or fresh snowfall (possible year-round). There's a bonus when it's off-limits to cars: Bikers and walkers are still welcome on the road, and they don't have to deal with cars zooming by or exhaust fumes.

Early summer is when Glacier most vibrantly comes to life. After a dark, cold winter and a thaw that seems to never end, the park's forests and meadows are at their greenest, yet the peaks are still gloriously capped in white. Bear, bighorn sheep, and other critters are out in abundance after months of inactivity. "Your chances of seeing wildlife are better in June than July or August," says park ranger Pat Suddath. "Moose are pretty elusive, but in early summer there are plenty of sightings, even of adorable newborns, in the Upper McDonald Creek Valley or the Many Glacier area." Harlequin ducks, covered in blue-gray feathers with brilliant patches of white, nest at Glacier for a few weeks and are gone by the end of the month. With all the melting snow and ice, June is the best time of year for photographing waterfalls or charging down the rapids on a white-water rafting adventure. And the days are never longer: The sun rises around 5 a.m. and sets at 10 p.m. To escape any semblance of a crowd, drive up the North Fork Valley on the park's west side. After 25 or so miles on a washboard dirt road, you'll reach Polebridge, a small outpost that's about as far out into the middle of nowhere as you can get by car. There's not much here except the Polebridge Mercantile (406/888-5105), a bright-red general store straight out of a Wild West movie that sells groceries, coffee, fishing tackle, and great baked goods; and the Northern Lights Saloon, a funky cafe with picnic tables, huge burgers, and cold microbrews on tap.

Hiking Without Borders
Glacier is just part of the larger Glacier-Waterton International Peace Park, with protected land on both sides of the Canadian border. On Wednesdays and Saturdays from mid-June to early September, one American and one Canadian park expert jointly lead a free International Peace Park Hike. Walks start at 10 a.m. at the Waterton townsite, heading south along the west side of Upper Waterton Lake. Hikers head to the Goat Haunt Ranger Station in Glacier. From there, most folks hop the $15 ferry that arrives back where the hike started in Waterton around 6 p.m. (406/732-7750, reservations required).

Leave the Car Behind Amtrak trains stop at three depots in northwest Montana—East Glacier Park, Essex, and West Glacier—where you can get off and literally hike right into the park. Add in a system of hiker shuttles (which sometimes don't start until July; call for details) that pick you up and drop you off right at the trailhead, and Glacier is one of the few parks where you don't need a car.