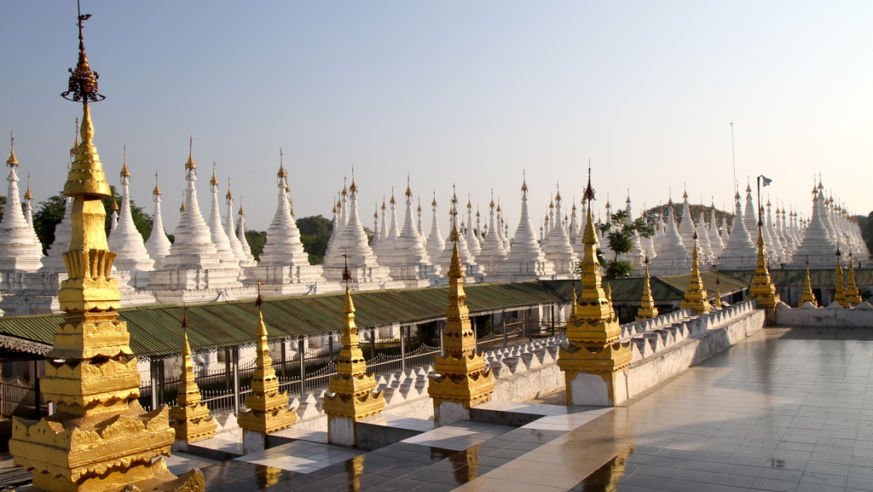 This article is a guest post by Ja Racharaks.

When you start investigatingMyanmar as a travel destination, you'll discover how many monuments have been constructed throughout the country's history that exhibit truly grand scales of devotion and determination. Myanmar is the home to at least six of the world's greatest attractions—and although three of these items have technically lost their titles in recent years, all have retained their genuine sense of significance and beauty.

The World's Biggest Book: Kuthodaw Pagoda, Mandalay
The Kuthodaw Pagoda is located at the base of Mandalay Hill and within the complex lies 730 Kyauksa Gu, stone-inscription caves, which contain the "pages" of the book. Not a traditional paper item, the book's text, a complete copy of the Tipitaka, the Pali Canon of Theravada Buddhism, is written on both sides of marble slabs 3.51 feet wide, 5.02 feet tall, and 5.1 inches thick. In this instance, the marble slabs are the "pages" and the Kyauksa Gu are the "leaves" of the book.

The World's Longest Teak Structure: U Bein Bridge, Amarapura
Close by Mingun, about 12 km down the Irrawaddy River from Mandalay on the eastern side of the river is Amarapura. Founded by King Bodawpaya as his capital city in 1783, the township is now a part of Mandalay. The bridge spans 3,937 feet across Taungthaman Lake, created from teak wood reclaimed from an old royal palace. Named after the mayor who had the bridge built, it's still used as an important passageway for locals. With fears that some of the 1,086 pillars are becoming dangerously decayed, efforts have been made to repair the bridge, with some of the pillars being replaced with concrete.

The World's Largest Iron Buddha: Sandamuni Pagoda, Mandalay
At the base of Mandalay Hill is the Sandamuni Pagoda, home to the world's largest Iron Buddha statue. Commissioned by King Bodawpay in 1802, it has made many trips around the country according to the placement of capital cities and wars, makingn its final move to Mandalay in 1874. Cast out of 18563.94 kg of iron, it's said that the image is endowed with the attributes of the Full Moon, which gives the image its name, Sandamuni.

The Giant Standing Buddha, otherwise known as Laykyun Setkyar, is actually the second largest Buddha statue in the world at a height of 424 feet with 31 floors inside. The Reclining Buddha has been surpassed by a stone reclining Buddha carved in China's Jiangxi Province to be completed at a length of 1,365 feet.

The World's Largest Pearl (Surpassed): Nay Pyi Taw Gem Museum, Nay Pyi Taw
Among the jade boulders and Myanmar's largest ruby, the Nay Pyi Taw Gem Museum also has what was previously considered to be world's largest natural pearl. The pearl is 6.2cm x 5cm x 3.1cm and weighs 845 carats. It was found in 2001 in a mother of pearl oyster during an oyster fishing expedition at Macleod Island in the Mergui (Myeik) Archipelago, in southern Myanmar. The current largest pearl is called the Pearl of Lao Tzu or Pearl of Allah, found in the Philippines inside a giant clam, is 24 cm in diameter, and weighs 32,000 carats.

The World's Heaviest Functioning Bell (Surpassed): Mingun Pahtodawgyi, Mingun
About 11km up the Irrawaddy River from Mandalay lies the Mingun Pahtodawgyi, which is a spectacle in itself. Intentionally unfinished, the stupa was started by King Bodawpaya in 1790. He had stopped its construction at 50 meters after hearing a prophecy that foretold his death if he were to ever complete it, a 150 meter immense structure. In fact, some could call this (unofficially) the world's largest pile of bricks. To go along with the grandeur of the stupa, the king also commissioned a gigantic bell to be housed within it. At a five meter diameter and weighing 90 tons (199,999 lbs) the bell's bronze construction made it the world's heaviest functioning bell. The bell held its title on and off for almost 100 years but is now surpassed by the Bell of Good Luck in China.