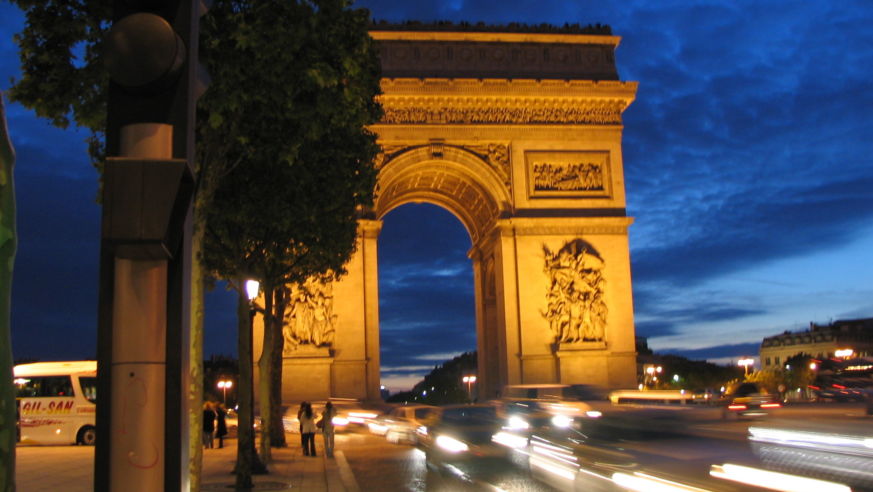 When in Paris, visit the Arc de Triomphe, a monument honoring all who fought and died for France during the French Revolution and Napoleonic Wars.

The Run Down: Dubbed the city of sin, Las Vegas is an adult's playground. Between the drinking and the gambling, though, you may find yourself with a few hours to burn. During your downtime, check out the Bodies exhibit, Madame Tussauds, the Blue Man Group, Cirque du Soleil, and CSI: The Experience. You should check out the Miracle Mile shops as well. There's plenty of fun to be had in Las Vegas without drinking or gambling.

The Culture: While Sin City is known for its gambling antics and adult entertainment, Las Vegas is also filled to the brim with museums and art shows. The people are extravagant and eccentric, and often times have a knack for being stared at by visitors to their fair city. However, you will not find a shortage of politeness here, nor will you find a shortage of the vulgar. It's a cultural mix that has a bit for everyone to taste and enjoy.

The Run Down: Visit France and head to the city of love: Paris! While you're there, check out the numerous attractions, such as the Eiffel Tower and the Arc de Triomphe, a monument honoring all who fought and died for France during the French Revolution and Napoleonic Wars. The names of all of the French victories and generals are inscribed on the inner and outer surfaces. You should also check out Le Fumoir, the Musée de l'Orangerie, and the Centre Pompidou.

The Culture: For those of us in the States who know nothing but the hustle and bustle of everyday life, Paris has a lot to offer. The people know how to relax and take it easy. While Americans seem to have everything at our fingertips ready to go at a moment's notice, Parisians take everything in the opposite direction and force you to sit down and enjoy the beauty of everyday life. If you were to grab a cup of coffee at your local Starbucks, you'd be in and out within a matter of minutes. However, Paris will remind you to enjoy the small things in life as the people aren't big on handing out "to-go" cups. Have a seat on the veranda and relax, you've earned it.

The Run Down: For the hardcore sports fan, it's a necessity to visit Chicago. Check out a Chicago Blackhawks game, enjoy a Chicago Cubs game, and cheer as the Chicago Bears score a touchdown. Pose with the Cloud Gate sculpture for a new trendy new Facebook photo. There are several museums and theater companies in Chicago, so catch a show and discover something new that you'll enjoy.

The Culture: Chicago has thrown itself to the forefront by introducing a new cultural program back in 2012. The city is trying to highlight the arts by giving all of those within the city who have talent and experience to the stage in order to offer various forms of social entertainment.

The Run Down: Nestled on an island in Northeast Italy and only accessible by the Via Libertà, Venice should be on everyone's bucket list. After you've had your fill of the amazing architecture, you've got to experience drifting down the waterways on a traditional Venetian gondola. Enjoy some wine along with your genuine Italian meal and be sure to check out the Guggenheim collection before you go.

The Culture: Venice lends itself to a very musical culture. The city has several elite music halls, museums, and other forms of socially entertaining attractions. Venetians pride themselves on living in the moment and living in the music.

The Run Down: Another destination that should be on everyone's list, Maui is one of the most popular islands in Hawaii. There are plenty of surfable beaches, trails to hike, and beautiful places to explore. After you've had your fill of those activities, enjoy a stress-free nap in a hammock next to the ocean.

The Culture: The Hawaiian Islands are filled with folks who are a little more than enthusiastic about their heritage. The locals are so heavily entrenched in their history, they are willing to go ahead and show their rituals and cultural gems to those around who may not have had the privilege of knowing exactly what it means to be a part of Maui. The people here are very polite and incredibly hospitable. If your journey takes you to Maui, then you'll love the inviting warmth and hospitality the islanders have to offer everyone they meet.

The Run Down: Thanks to Walt Disney World and other area theme parks, Orlando is the family entertainment capital of the world. After you find deals on flights and book several days to party with Mickey Mouse, you may need a slight change in venue. Fret not, there are plenty of other theme parks to choose from: Visit Universal Studios, Islands of Adventure (home to The Wizarding World of Harry Potter), SeaWorld, or Discovery Cove.

The Culture: Orlando is very tourist friendly. While some parts still harbor the big city mentality and overbooked transit system, a good majority of the city is brimming with smiling faces. Tourism is one of the major cash cows for Orlando, but that doesn't mean the city is without its museums and theater arts. Visit the Orlando Museum of Art, where you can wine and dine while looking at the different pieces of work hanging from the ceilings.

The Culture: While Washington D.C. may be the headquarters for a lot of the United States' government operations, it is also filled to the brim with cultural attractions. The inhabitants are well versed in the essence of Jazz, the pain and rebirth spawned by the Civil Rights Movement, and the arts.

The Run Down: Welcome to the nation's entertainment capital. For the true movie buff, there's nothing like driving around Los Angeles and recognizing places from their favorite movies and television shows. Pay your respects to your favorite entertainers who are no longer with us by visiting Forest Lawn Memorial Park in nearby Glendale. Stop and see a movie at the world-famous TCL Chinese Theatre (formerly, Grauman's Chinese Theatre). Swing by one of the last remaining large record stores, Amoeba Music, and see a live performance. End your trip by taking a quick drive to Santa Monica, one of Budget Travel's favorite boardwalks.

The Culture: A lot of people sum up L.A. in one word: weird. Like their east coast counterparts, the folks of Los Angeles are willing to say and do just about anything they want. The city hosts a lot of opportunity for aspiring actors, actresses, performers, or the generally ambitious. There are several artistic venues to choose from when exploring—musical performances, theater arts, and even Hollywood film sets. If you've got the right amount of drive and ambition and feel like spending more than just a few days in the City of Angels, feel free to jump on the bandwagon. Just make sure you're wearing your running shoes because this city is never at a standstill.

The Run Down: Fly out of the country and head to Prague. You can walk over the Charles Bridge, which spans 16 arches and is lined with 30 Baroque statues. This bridge was commissioned by King Charles in 1357, so you're walking over a huge piece of history. Check out the Memorial to the Victims of Communism, which houses photos, videos, and propaganda from the Communist era. Finish your visit by checking out Prague Castle, the largest ancient castle in the world.

The Culture: While there was a time when the word Prague was synonymous with despair, it is now a center for dance and lively music, and the people there take every opportunity to bask in the music and luxury of the arts. Why not join in and enjoy the finer things in life?

The Run Down: There are many things to check out in Ireland besides the beautiful scenery—visit the Abbey Theatre, The Little Museum of Dublin, and the National Museum of Ireland. You'll be able to fully relax in St. Stephen's Green, a beautiful, lively urban park.

The Culture: Dublin is filled to the brim with relaxing Celtic landscapes, friendly locals, music, and a culture of endless hospitality extended to visitors and residents alike.

We want know: what kinds of places and things are on your travel bucket list? Sound off below!