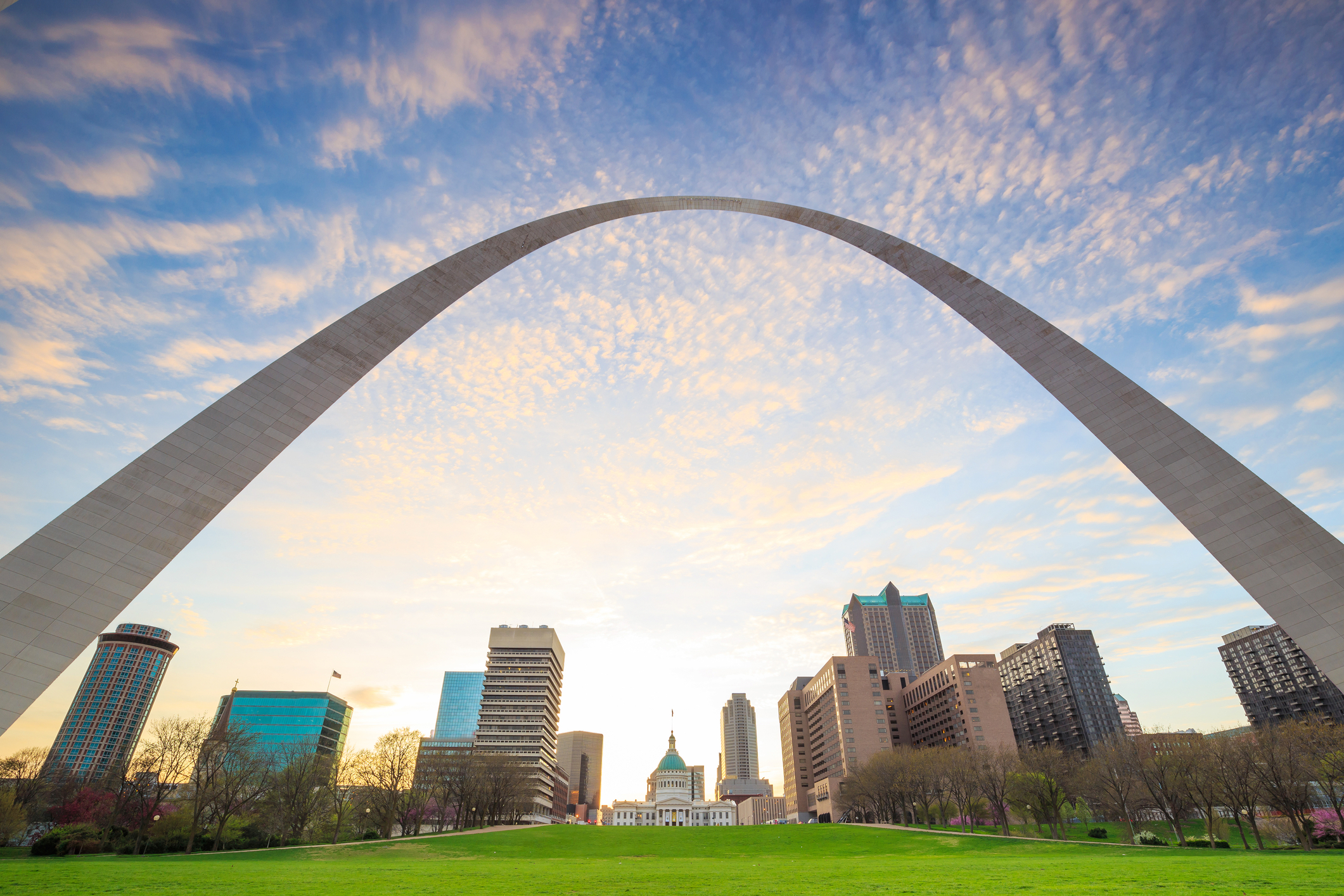 Fair warning: I'm from Missouri, so pardon me if I wax poetic about the Gateway Arch in St. Louis, Missouri. The curvy stainless-steel landmark turns 50 years old today, on the anniversary of "the moment when builders set in place the landmark’s crucial keystone." That's the uppermost part of the Arch, the impossibly thin tip-top of the structure—a lookout point that affords incredible views, up to a 30-mile radius, paying special attention to the west (the Arch is an homage to Westward Expansion) and to the Mississippi River in the east.

When you visit St. Louis, swallow your claustrophobia and go all the way to that 63-story-tall keystone via the Journey to the Top tram ride. Today, admission is $1, the original price when tickets were first sold in 1967, and the arch will be lit in gold-tone floodlights. Otherwise, tickets are $10, which is a steal for what you get.

I'm from Southwest Missouri, a good three and a half hours by car to St. Louis, and I went twice, 20 years apart: Once in 1992, as a child, when my parents brought me, and once in 2012, long after I moved out east as an adult, because I wanted to go back. Couldn't get it out of my head. Here are five reasons you should go:

1. You've GOT to experience the crazy tram ride to the top.

When I describe what it feels like to go to the top of the Arch, I end up saying something like this: "You stand in line on stairs, and when it's your turn, you step into what looks like a giant human-sized cylindrical clothes dryer. You sit inside on a bench with a few other people, and as you go skyward, the whole thing tilts...then clicks. Then tilts...and clicks. And suddenly you're at the top, standing on a thin strip of carpet, peering out at two different states with only a handful of other people."

There are more technical terms for this experience ("enclosed tram," "the viewing area can hold up to 160 people," etc.—the National Park Service's website is an excellent resource for specifics), but going to the top of the Arch feels more personal than that, and that's a good thing in an age of selfie sticks and swarming crowds.

If you've ever watched Mad Men and admired Roger Sterling's office—the marble-topped "tulip"-shaped table and matching stools in particular—you'll be pleasantly surprised to note that the same guy who designed those designed the St. Louis Arch. Rust issues aside (hard to notice unless you're looking for them), the beauty of the design holds up. Seeing it silver and soaring from the ground up is one of my favorite recent travel memories.

3. You can walk from the Arch to get fried ravioli. (Enough said.)

The Arch area is eminently walkable, a pleasant Midwestern surprise. Take a stroll along the well-kept grounds to the nearby downtown, and sit at an old-school restaurant like Caleco's, for St. Louis specialty fried ravioli dipped in marinara sauce (just trust me on this one) and a menu of seemingly unlimited incarnations of Budweiser. Or, head to the South Broadway location of St. Louis chain Imo's Pizza. Locals love it. Fervently.

4. The movies alone—even if you don't go to the top—are worth the trip.

The filmstrip shown while you're waiting in line to hop the cylindrical tram to the top has the retro charm of a grade-school film strip—heavy on Mark Twain references (this is Missouri, after all) and scratchy execution—but, again, that's not a bad thing. If you decide not to go up to the top, the documentary film Monument to the Dream (included with admission to the top of the Arch and to the grounds) captures the construction of the Arch and Eero Saarinen in all his glory.

5. If you want Americana, this is it.

I adore Paris (obviously). I live in New York City and love it accordingly. But big-city hooplah can get overwhelming when you're trying to have an authentic travel moment, and there's a quaintness to the Arch that feels like discovery.

I'm biased, of course. I'm now a city girl through and through, but in 2012, after I went to the top for the second time, 20 years after my first visit, I couldn't resist buying an official Gateway Arch photograph, with the Missouri capitol building and the Arch digitally superimposed over my and my now-husband's beaming faces. The photo company throws in a few smaller copies too. Today I cut one out for my husband to put in his wallet.

Here's how happy I was right before I boarded the tram (the woman to the left was excited too, I promise): 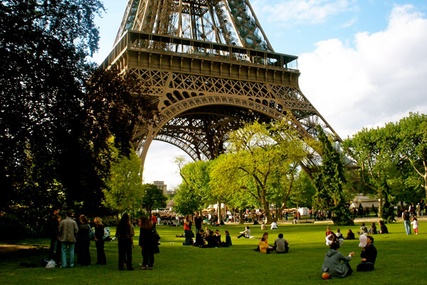 Paris: Top 5 free things to do in November

The only thing better than visiting Paris is being able to enjoy free events in Paris. Here's a round-up of activities for the cozy month of November. Fall foliage in the Parc des Buttes Chaumont The city's wildest, hilliest park is exploding with autumn colors right now. Take an exhilarating urban hike around the the park's lake and cross the newly reopened suspension bridge to reach the waterfall. If that works up an appetite, you can stop inside the park at Rosa Bonheur, which has recently transformed from a simple drinks place to a full-on (affordable) restaurant. Parc des Buttes Chaumont, 19th arrondissement. Dysfashional exhibition at the Passage du D&eacute;sir, (through November 29)This free art show has lured some of fashion's most cutting-edge designers into a pop-up exhibition space near the Canal Saint-Martin. Works from Pierre Hardy, Maison Martin Margiela, and Gaspard Yurkievich are displayed until the end of the month, when this show packs up and heads to Berlin. Passage du D&eacute;sir, 85-87 rue du Faubourg Saint-Martin, 10th arrondissement, 011-33/1-56-41-36-04 Clotilde Dusoulier at WH Smith (November 17) The author of the popular Chocolate &amp; Zucchini site (who has written for Budget Travel Paris Tasting Tour and the aptly titled "My Paris Is Better Than Yours") will be celebrating her 6th "blogiversary" and discussing the editorial work she did for I Know How to Cook, the bible of French home cooking by Ginette Mathiot that was just released in the U.S. The food-love fest will begin at 7 p.m. WH Smith, 248 rue de Rivoli, 1st arrondissement, 011-33/1-44-77-88-99. Azar Nafisi at the Village Voice Bookshop (November 20) The author of the international bestseller Reading Lolita in Tehran will discuss her new book, Things I've Been Silent About. The memoir presents Nafisi's personal story about growing up in Iran against the background of her country's political revolution. The reading will begin at 7 p.m. Village Voice Bookshop, 6 rue Princesse, 6th arrondissement, 011-33/1-46-33-36-47 Paris Movie Walk at Shakespeare &amp; Company (November 25) Michael Schuermann, the author of Paris Movie Walks, will lead a free tour of his favorite cinematic haunts. The walk will explore Notre Dame Cathedral and the Rive Gauche, with Schuermann describing classic films such as An American in Paris, A Bout de Souffle, and Before Sunset (which was partly shot at Shakespeare &amp; Company) The walk will begin at 4 p.m. at the bookstore and will last for 60 to 90 minutes. Shakespeare &amp; Company, 37 rue de la B&ucirc;cherie, 5th arrondissement, 011-33/1-43-25-40-93. BONUS "NEARLY FREE" EVENT Return of la Fl&egrave;che d'Or (November 23) The Fl&egrave;che d'Or, before it closed in early summer, was every broke music lover's best friend. After months of sound-proofing, the city's best free venue will reopen, only not exactly for free. Entry for the first show&mdash;Evan Dando from the Lemonheads, Chris Brokaw, and others&mdash;will cost 8&euro; ($12), but that includes one free drink. Subtracting the 6&euro; cost of the drink, that makes the entry almost free&hellip; at least close enough to qualify for our list. La Fl&egrave;che d'Or, 102 rue de Bagnolet, 20th arrondissement. Check out Budget Travel's new Paris guide

Photo Contest: We have a winner!

Congratulations to my Budget Travel member Dlj668, whose excellent photo of Venice (shown above), is the winner of our photography competition. The prize? A trip to Punta Cana! The winner snapped the shot while on a mother/daughter trip. Note: We don't usually showcase black-and-white shots, but this one really caught our eye for its fantastic composition and authenticity. Way to go! The grand prize trip, supplied by Barcel&oacute; Punta Cana, includes roundtrip airfare for two from the winner's closest international airport to Punta Cana, Dominican Republic&mdash;plus six nights/seven days, all-inclusive accommodations at Barcel&oacute; Punta Cana (which is highly rated on TripAdvisor). If you haven't joined myBudgetTravel yet, go to the sign-up page now! We're still looking for photos for our new food and drink series. We're also in search of fantastic nighttime photos. MORE PHOTOS Readers' Best Rainbow Photos

Budget Travel's new Paris city page&mdash;currently in beta&mdash;lets you post questions, recommendations, photos and more. One completely new feature we've developed: If you're going to Paris soon, or you're just back, you can comment, ask questions, or leave recommendations and tips for other travelers&mdash;and you may hear back directly from our editors in real time, or at regularly scheduled intervals. If they do, you'll see a lime green "editor" button identifying their response. Also on our Paris City Page, if editors see a consensus forming around a particular topic&mdash;like apartment rentals, for example&mdash;they may assign a story and post the results in our "We're Listening" box. Be sure to check out news from our Paris reporter, or browse Paris package deals (such as Paris &amp; Nice, Air/6 Nights, From $749) and reviews of Paris hotels from $85. We're still adding features (like our interactive map), and we'll be rolling out pages for Rome, London, NYC, and San Francisco, all coming soon. In the meantime, we're working on fixing little bugs we see in certain Web browsers, and we're busy adding features&mdash;including our map of affordable Paris hotels, restaurants, and shopping venues near major tourist attractions in the near future. [Budget Travel's Paris City Page] 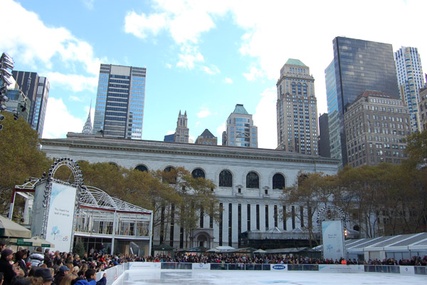 The holiday season really is the city's most wonderful time of year, and it's already getting in motion. At lunchtime today, the Pond at Bryant Park and 125 surrounding holiday shops opened. Passersby crowded around the rink, even climbing onto the park's caf&eacute; chairs to glimpse the synchronized Haydenettes and other professional skaters. Workers were putting the finishing touches on Celsius, a two-story rinkside restaurant and lounge. Open through January 24, 2010, the Pond has a prime midtown location between 40th and 42nd Streets and Fifth and Sixth Avenues&mdash;in view of the Chrysler and Empire State buildings. It's the only free ice-skating rink in New York City, although skate rentals will set you back $12. RELATED Affinia Manhattan's Real Deal includes accommodations, two skate rentals, hot chocolate, a Macy's discount, an in-suite movie, spa products, and other goodies, from $239 a night&mdash;a savings of $125.