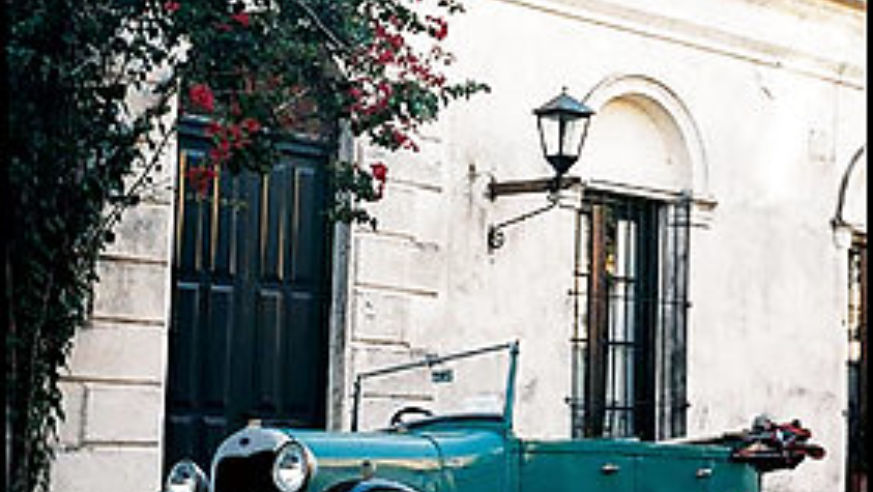 Spend a Night in Uruguay
If Argentina isn't foreign enough, take the ferry over to Colonia del Sacramento

A high-speed ferry covers the 25 miles between Buenos Aires and Colonia del Sacramento, Uruguay, in about an hour, but Cintra and I aren't in a hurry. We instead board the slow boat to get a better look at the receding skyline and the caramel-colored Rio de la Plata. Three sleepy hours later, we walk seven blocks from Colonia's ferry terminal to the Barrio Histórico--the original part of town, at the peninsula's tip. We'd heard that Uruguayans love yerba maté, a bitter herb tea that the Spanish colonists were taught to make by indigenous tribes, and sure enough, every other person we see has a thermos of hot water tucked under his arm and a dried, hollowed-out gourd full of the tea in his hand.

Founded in 1680, Colonia is the oldest town in Uruguay. The walled Barrio Histórico--added to UNESCO's World Heritage List in 1995--was a strategic commercial port that ricocheted between Spanish and Portuguese possession for centuries. Looking down from the top of the 150-year-old lighthouse that abuts the stone ruins of Convento de San Francisco, I can see the slant-roofed houses and irregular paving stones that are remnants of the Portuguese colonists, as well as the flat-topped buildings and cobblestone streets that were built during the years of Spanish occupation.

We set off toward the water, passing parked 1930s roadsters now and again, and stop for a leisurely lunch at Restaurant del Yacht, where we have a three-sided view of the river and Colonia's half-moon curl of beach. Sailboats and pleasure cruisers from around the world bob where merchant vessels and smugglers' ships once did. Restaurant del Yacht dresses its waiters in pirate head scarves--a nod to the past, or so we assume.

It's often joked that in Uruguay there are three cows for every person, which may account for all the leather. At Artesanías y Tejidos Colonia del Sacramento, near the port, Adalberto Untierrez sells cowhide rugs starting at $130. As he shows us his inventory, I notice that some have much longer hair than others. "It depends when they kill the cows," explains Adalberto, whose bronzed face is more leathery than the hides he sells. "Their hair grows out in winter."

Back in the center of Barrio Histórico, we check into the Posada Plaza Mayor. Our room has French doors that open onto a courtyard filled with wisteria, grape, and jasmine vines. A blue-and-white-tile fountain gurgles at the garden's center. When the sun sets and day-trippers hop the ferry back to Buenos Aires, the town gets very quiet. At Blanco & Negro, Cintra and I share a plate of gamy ñandú (ostrich) in a leek sauce. The popular restaurant hosts Colonia's annual jazz festival in February, and as we eat, we're serenaded by a band playing an amphetamine-fast version of "The Girl From Ipanema." After dinner we stumble across Colonia Rock, a nearby restaurant and bar. It seems everyone in Colonia under the age of 40 is there, singing Spanish karaoke versions of Eric Clapton as well as hits by Argentine rockers like Charly García.

The next morning, we walk to the riverfront Radisson Hotel, just outside the city center, to meet our tour guide, Alberto Pintos. (We called to book him the night before; he works out of the hotel.) Pintos leads us through a gossip-filled two-hour walk, regaling us with tales about how Colonia is surrounded by a graveyard of sunken ships--and therefore treasure. On days when the wind blows the river toward Buenos Aires, he walks the rocky shoreline uncovered by the receding tide looking for gold and silver coins in the muck. "We sell them for between $50 and $800 at a gallery on Calle de los Suspiros," says Pintos, referring to the Street of Sighs, once home to the city's red-light district. "Some families make a living--a good living--from them." After our tour, Cintra and I eat smoked pork ribs and drink Uruguay's full-bodied red wine, tannat, at Mesón de la Plaza, a restaurant housed in what was a grocery store in the 1860s.

Before boarding the fast boat back to B.A., we take a taxi to the Hipódromo Real de San Carlos, where crowds of old men, young families, and grade-schoolers gather around a dirt track for the Sunday horse races. Next door is a crumbling brick bullring, its facade defaced by a graffiti portrait of Che Guevara. The ring was built in 1910 by a Croatian-Argentine businessman, Nicolás Mihanovich. He saw his dream die after only eight bullfights--Uruguay outlawed the sport in 1912. The ring, like sleepy Colonia, has been quiet ever since.

Getting there: By ferry
Buquebus operates the ferries between Buenos Aires and Colonia (011-54/11-4316-6500, buquebus.com). Expect to pay $37 each way for the fast ferry or $19 each way for the three-hour boat. A one-way taxi to the Hipódromo costs about $6.50. Everything else in town can be reached by foot.