By Matt Walker and Zeneba Bowers of Little Roads Europe
February 11, 2019
Xantana/Dreamstime
Among Germany’s many architectural, cultural, and culinary delights, the picture-perfect towns of Bavaria belong on every traveler's must-see list.

To ring in 2019, we made an affordable escape to Europe and visited several small towns in Bavaria, the iconic southern region of Germany. The history, architecture, and culture of medieval and Renaissance Bavaria are preserved in several impossibly cute town centers, and it was a wonderful place to welcome the new year. And of course, the beer everywhere was wunderbar.

Bavarian food, in particular, is perfect for cold weather - hot and hearty and delicious. Most travelers visit Europe in the summer; but those who venture to visit somewhere like Bavaria in the off-season are rewarded with picturesque vistas, lower prices and, best of all, far fewer crowds. Here, four towns we fell for—and you will too. 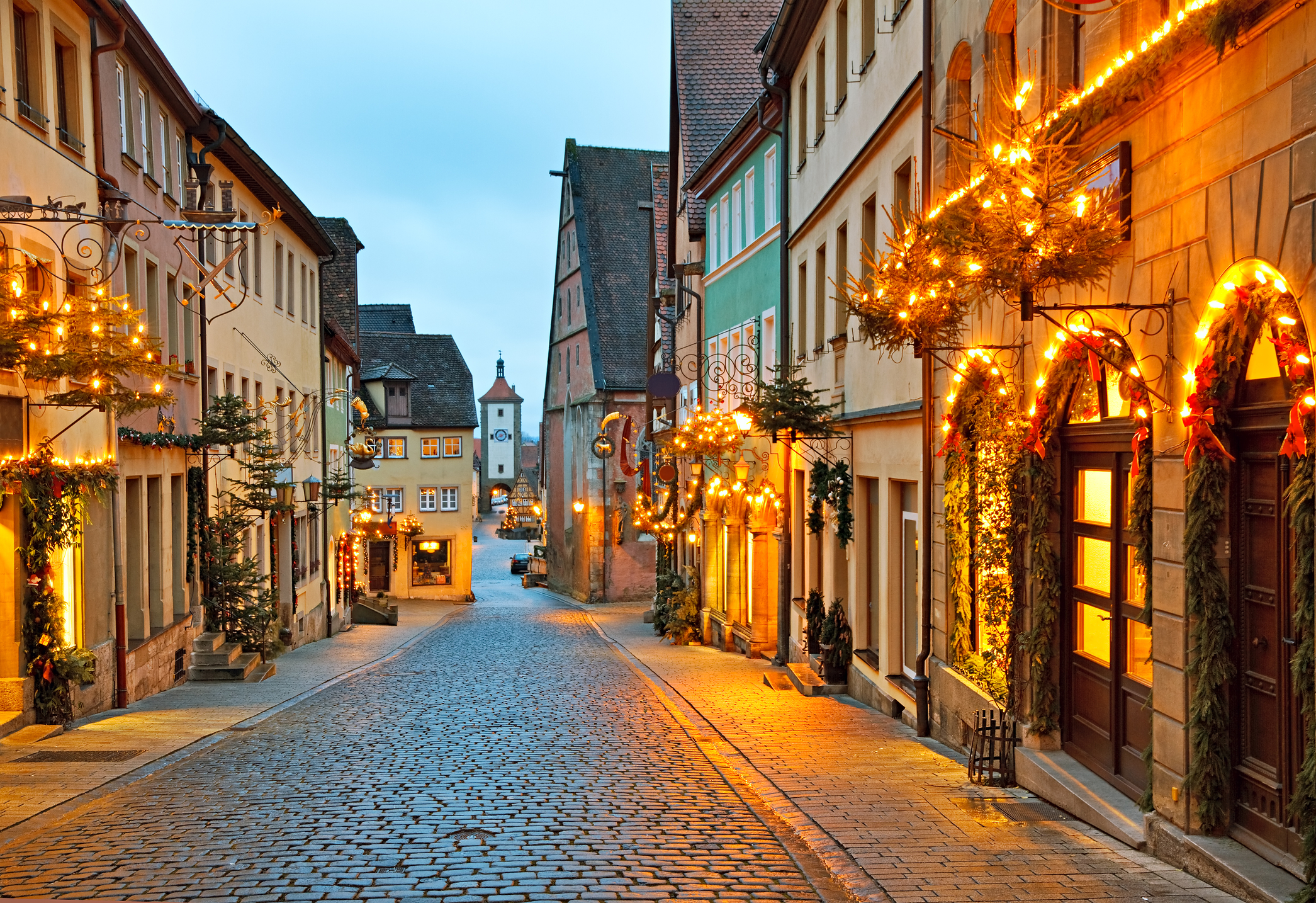 Rothenburg is remarkable for (among other unique features) the 13th-century wall that surrounds much of the town’s medieval center. Visitors can walk the two miles of covered ramparts, looking down over the roofs and streets or through the “archers’ slits” to the countryside. Seventy watchtowers appear along the wall, some of which overlook the lovely expanse of the Tauber river valley far below. Steps lead down from the wall every hundred yards or so, enabling visitors to stroll along the fairy-tale streets and visit beer gardens, churches, shops, and museums, including the cheery Käthe Wohlfahrt Christmas Museum and the grim Museum of Medieval Crime and Punishment. Most of the current wall dates from the 13th century, but a sizeable portion of it (and the part of the town within the wall) was destroyed in World War II. Allied soldiers then convinced a German commander to surrender the town, defying Hitler’s orders but saving the rest of the town from destruction. The town square sports a 17th-century clock with a mechanized drinker that commemorates the time during the 30 Years War when the town was saved from being destroyed by an attacking army because its mayor, essentially on a dare from the conquering general, quaffed a tankard of wine - almost a gallon! - in a matter of minutes. 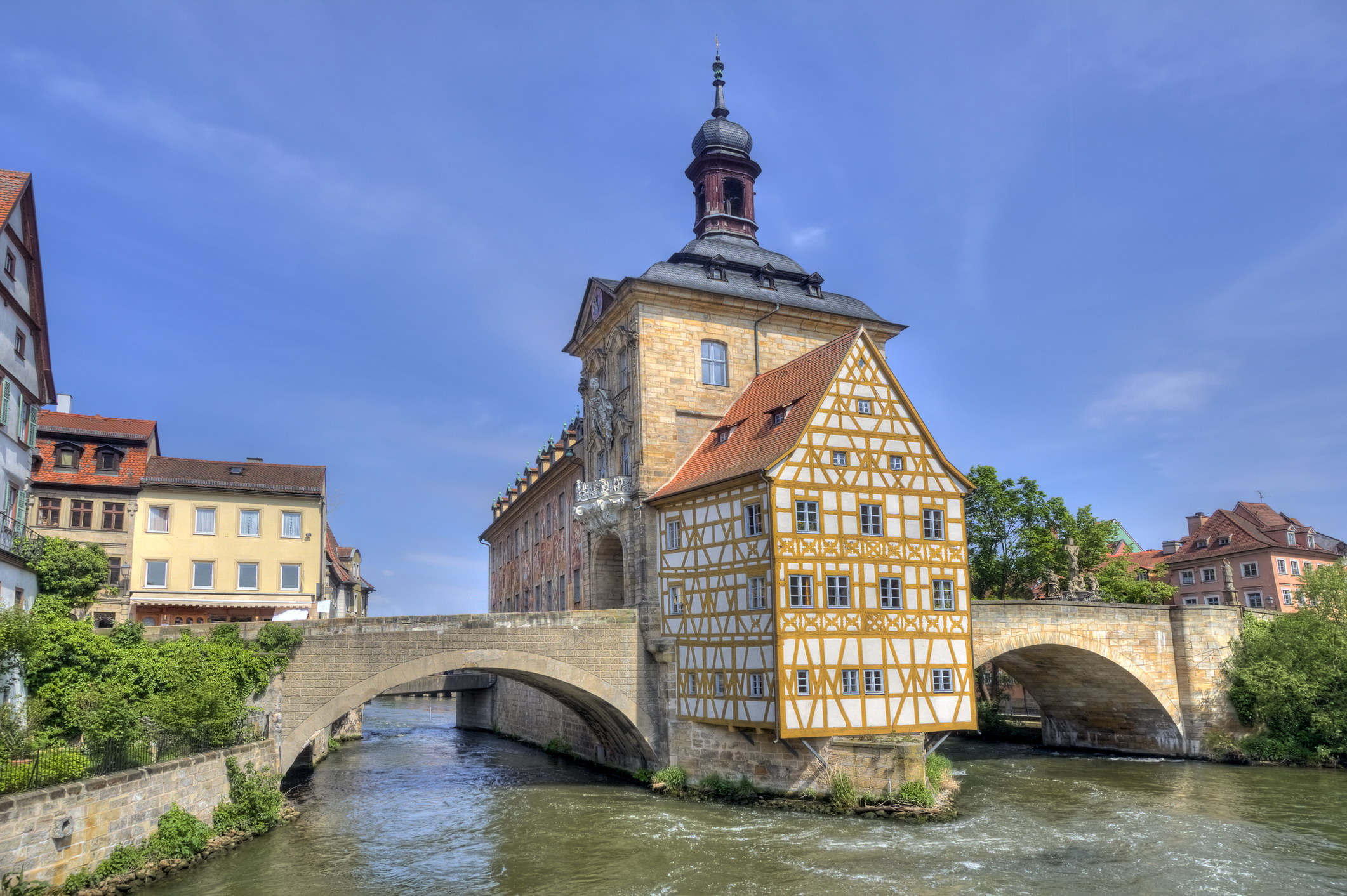 The historic center of Bamberg is a UNESCO World Heritage site, due to its well-preserved medieval architecture and city layout. Its many old bridges crossing the Regnitz River add to its charm. The city grew up over centuries around seven hills, like Rome, leading to the nickname "the Bavarian Rome." Bavarians, though, like to reverse this, instead wryly referring to Rome as the "Italian Bamberg." Bamberg is also known as one of the prime sources for the much-sought-after Rauchbier ("smoked beer"), made with beechwood-smoked malts. This type of beer is an acquired taste - be sure to acquire some! 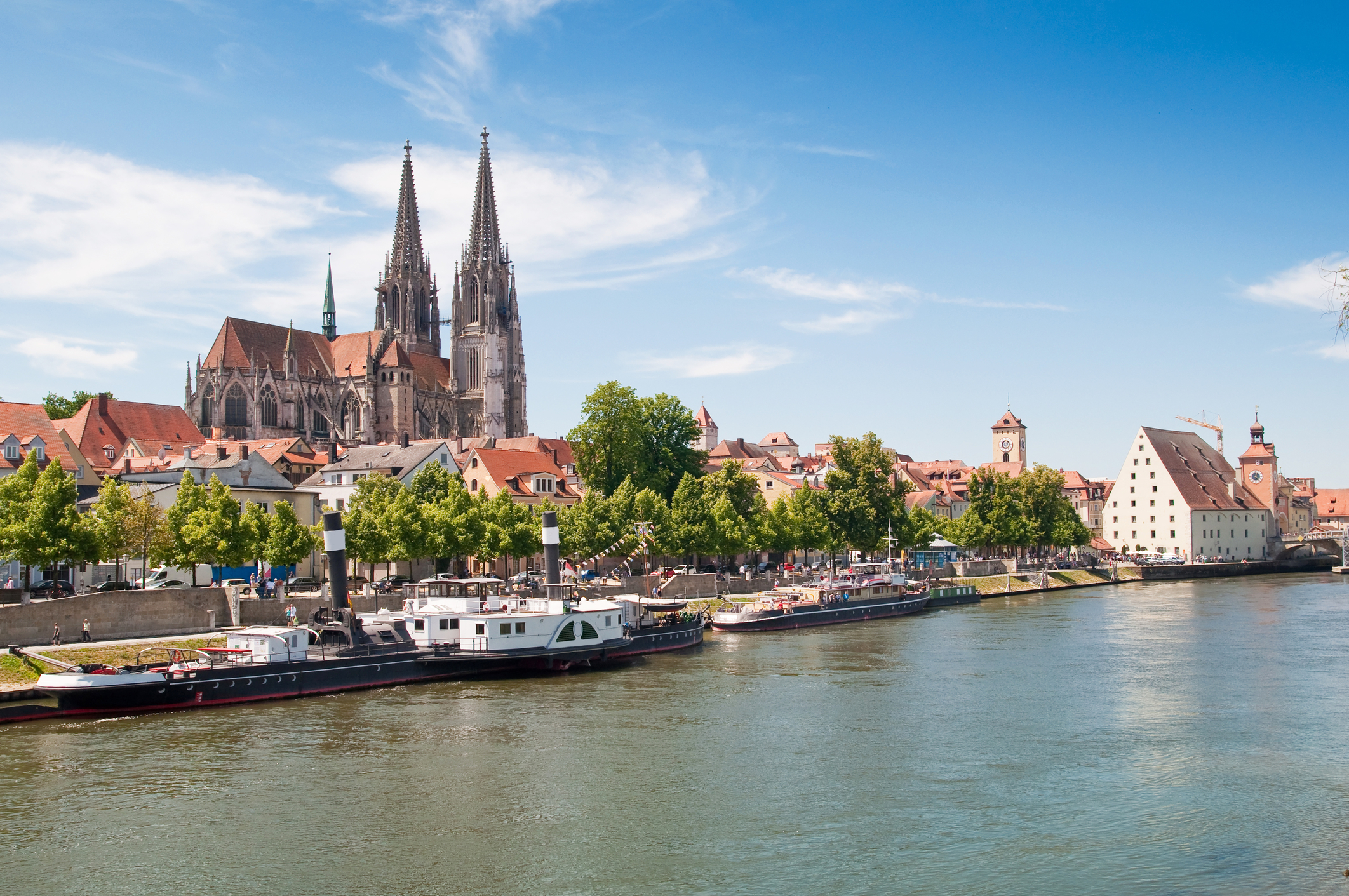 Regensburg sits where the River Regen joins the Danube, and as such arose as a center of commerce and culture since Roman times. The old town was fortunate to avoid bombing in the Second World War; consequently, its medieval center earns it a place on UNESCO's World Heritage list. Among its many river crossings is an iconic 12th-century stone bridge with 16 arches. At one end of the bridge is the equally old Historic Sausage Kitchen, a restaurant founded in the mid 1100s and operated by the same family since the early 1800s. Grilled sausages are their specialty of course, and they’re delicious. The cathedral here is monumental, displaying the vast wealth and influence that the town enjoyed since the 13th century. The exterior face contains countless ornate sculptures depicting fantastic beasts and biblical figures as well as actual monarchs and church leaders throughout the centuries. The interior is a yawning vault of towering stained glass windows, titanic stone columns, and walls full of carved statuary. Down an unremarkable alley a block away, a modest marker (on a house now owned by a local architect) commemorates the industrialist Oskar Schindler, whose subversive efforts saved the lives of more than a thousand Jews during the Holocaust. After the war, Schindler lived in Regensburg for a time. 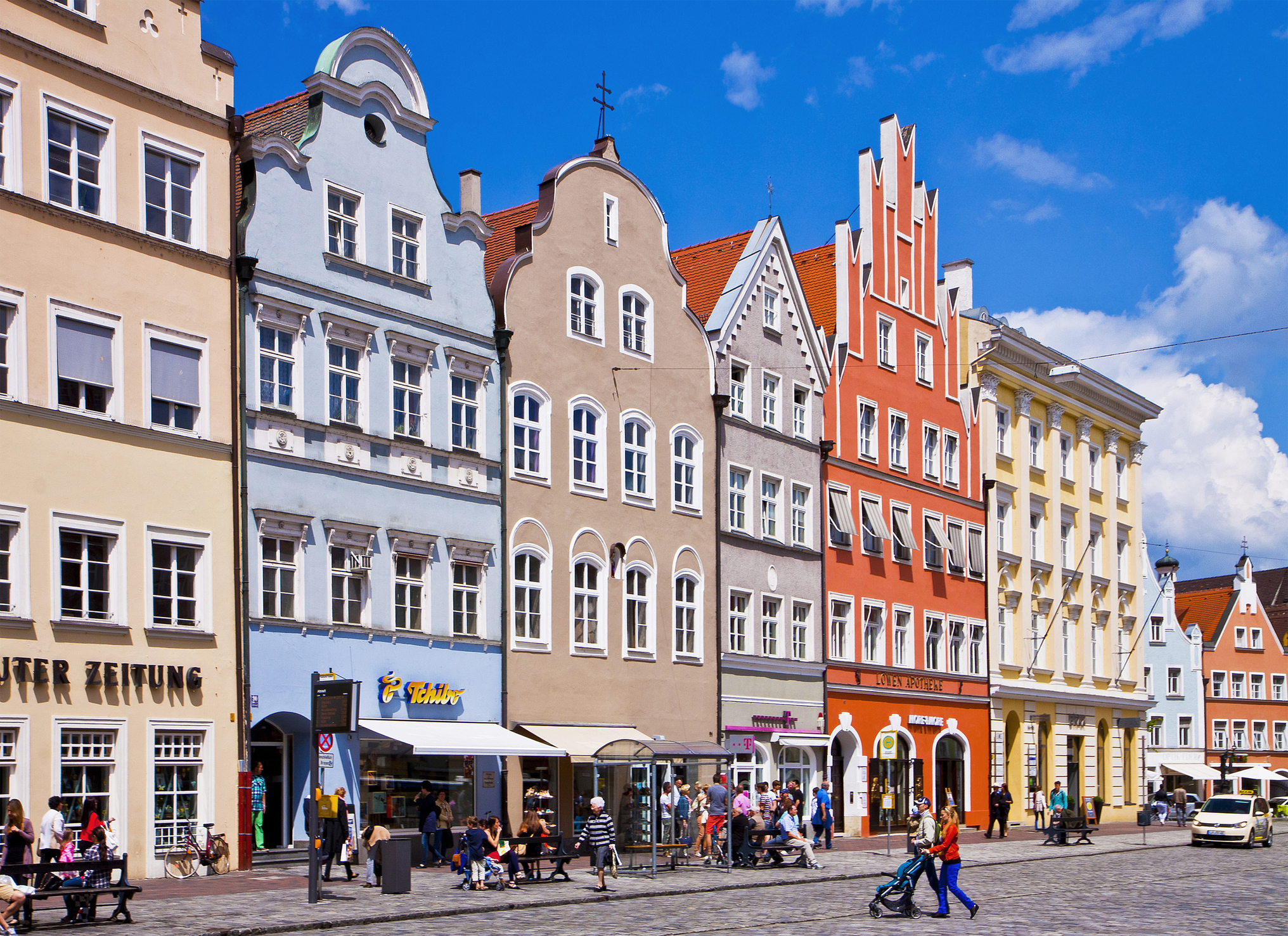 Though close to the sprawling metropolis of Munich, the bustling town of Landshut retains a medieval charm. Its cobbled center street is a vast car-free zone, allowing pedestrians and cyclists to enjoy many blocks of shops and historic sights without concern for motor traffic. Just up the hill overlooking the town, the walls and towers of Trausnitz Castle have flexed the muscles of Bavarian aristocracy since the 1200s. Amid the charming pastel-colored houses on Landshut's streets, the massive brick spire of Saint Martin's Cathedral looms large. Completed in 1500, it is the tallest church in Bavaria, and it is the largest brick church in the world. Inside, a 16-foot-tall Gothic crucifix hangs high from the vaulted roof in front of the altar, and the colorful stained glass windows in the nave depict figures from the Bible and lively scenes of real life in Bavaria. Landshut is worth visiting under any circumstance, but it is especially convenient as a last stop before leaving Germany from Munich’s airport, an easy half-hour drive away.

From Starbucks to Panera and from Adidas to H&amp;M, it’s tough to think of a major retailer that hasn’t staked out a claim in Times Square. The familiar logos gleam so brightly on storefronts and billboards that it’s one of the few places on Earth that astronauts can spot from outer space. But a crop of talented restaurateurs, bartenders, and visionaries have, in the past few years, given Times Square a jolt of indie spirit so exciting that even jaded locals are braving the crowds and dodging selfie sticks to check out these new destinations. Here are a few that might come to define the area in the future the way the masked Marvel characters and super-sized M&amp;M Store do today. 1. Tiki Fantasy: The Polynesian (Noah Fecks) The Polynesian (thepolynesiantiki.com) is a tropical affair decked out with teak wood floors and doors, rattan chairs, a lava-stone-topped bar, and Polynesian-art-inspired decorative touches. When you’re sitting at this spot in the Times Square Pod Hotel, and the bartender sets your drink aflame in its ceramic skeleton vessel, it’s really hard to believe you’re only one block from the Port Authority Bus Terminal, an enormous, less-than-charming transit hub—the Polynesian makes you think you're on a very different island. Since it opened in May 2018, the Polynesian has become a major destination for rum lovers, cocktail aficionados, and anyone craving a little tropical escape. But lest you think the tiki drinks here are the sticky-sweet party drink of vacation postcards, the cocktails were created by Brian Miller, one of the early pioneers of New York City’s cocktail renaissance in the early 2000s. His obsession with classic tiki culture and culinary artistry inspired him to design drinks that are equal parts playful and subtle. (Case in point: the Reggae Bus, an island interpretation of a Queens Park Swizzle, with rum, yellow Chartreuse, lime juice, mint, saffron syrup, and bitters.) The space is vast, so come with a group and order one of the large-format punches for the table. And if it's summertime, the terrace, which is equipped with its own separate bar, is a must. 2. A Giant World of Miniatures: Gulliver's Gate Topless sunbathers soak up the rays on fire escapes, an overturned flatbed truck stalls traffic on the street, and cops investigate a suspicious package on a subway platform. These scenes play out on a minuscule scale at Gulliver’s Gate (gulliversgate.com), an attraction that opened in May 2017 (at no small cost—creating it came with a $40 million price tag). It’s not as well-known as the landmark museums throughout the city or some of the smaller, more specialized museums, but it should be. The miniature New York City is rendered in a 1:87 scale and includes plenty of familiar landmarks, like the New York Public Library and One World Trade Center. But it’s the painstaking attention the dozens of artists and craftsmen gave to capturing the details of the city—subway tiling, taxi cab hubcaps, pedestrians’ clothing and accessories—that make a massive impact. The NYC display is certainly the most expansive part of the sweeping museum, but there are also small reproductions of cities in Great Britain, Russia, Asia, Europe, and the Middle East, complete with their iconic sites, old and new. (Look for buildings by Frank Gehry, I.M. Pei, Daniel Libeskind, and other celebrated modern architects.) Reservations required. 3. A Caffeine-Fueled Oasis: Optimistic Cafe Blink and you’ll miss it: Optimistic café is one of those rare phenomena, a small but mighty café surrounded in every direction by outposts of the major coffee chains. Reasons stop by this hidden treasure are many: matcha lattes, artisan espresso drinks, cold brew on nitro taps, locally baked pastries, avocado toast, poached eggs with Egyptian spices and, if you’re so inclined, a side of halumi. And here’s the best part: Walking into the cheery space on 39th Street, a dense Garment District artery, feels like the moment Dorothy opens the door of her house onto Oz. There’s a lush “green wall,” tables and counters made of thick slabs of wood, colorful mugs, and minimalist design touches that give a Scandinavian accent to the whole affair. 4. Cocktails in the Clouds: Dear Irving on Hudson (Noah Fecks) Dear Irving on Hudson (dearirving.com/dear-irving-on-hudson), a few blocks south of Times Square, occupies the 40th and 41st floors in the stylish new Alize Hotel, and with floor-to-ceiling windows and terraces for hanging out in warmer weather, you can bet you won’t forget the altitude. The locale is a spinoff of Dear Irving, a swish cocktail lounge that opened in Gramercy Park in 2015. Meaghan Dorman, who created the drink menu there, steps up again to design a selection of cocktails, some of which nod to New York’s classic history and others that pay tribute to the dynamic creativity driving the city today. Take, for instance, the imaginative Vice Versa: Brooklyn-made Dorothy Parker Gin, grapefruit liqueur, Luxardo Bitter, rosé cava, and grapefruit. The décor here is an ode to James Bond-inspired chic, with groovy, colorful furniture and Art Deco touches. So kick back with a Gibson, order a signature burger, and let the twinkle of the skyline inspire you. 5. Mindful Meat: Farm to Burger (Noah Fecks) There are burger menus, and then there’s the burger menu at Farm to Burger (farmtoburger.com), a farmhouse-chic affair also in the Alize Hotel. In addition to patties with inspired toppings, like onion marmalade and provolone on the Midtown variety, there are options like the Impossible Burger, the headline-making plant-based creation that actually looks and sizzles like beef, and a thoughtful kids’ menu. So that’s the “burger” part of the name. As far as the farm goes, servers will tell you that the all-natural beef they use comes from cows that were pasture-raised at Fossil Farms in New Jersey. There’s also a Kobe beef option if you’re looking for a splurge.