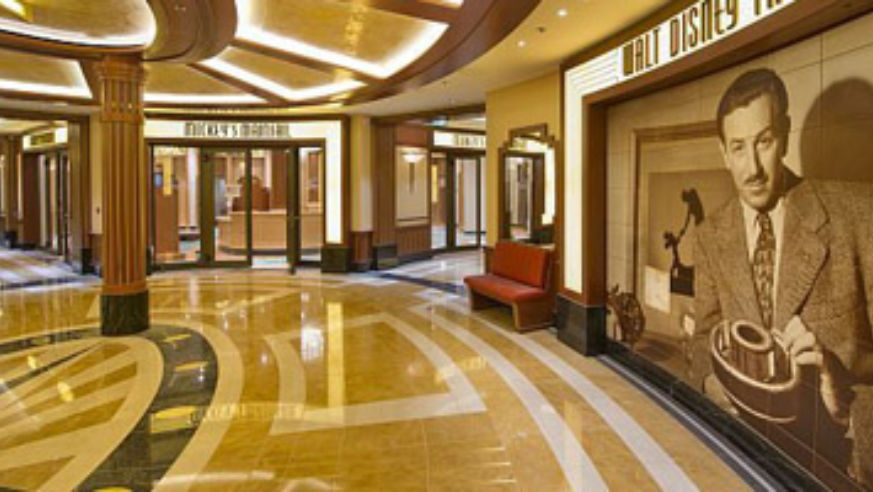 The 4,000–passenger Disney Fantasy cruise ship is under construction at the Meyer Werft shipyard in Papenburg, Germany. Budget Travel was invited to see the work in progress. The ship debuts in March, cruising from Port Canaveral (near Orlando).

CLICK HERE FOR A SNEAK PEEK INSIDE THE NEW CRUISE SHIP

The Disney Fantasy is a sister ship to last-year's Disney Dream. And let's face it, it's hard to top a ship (Dream) that received much–deserved fanfare for its first–ever water coaster at sea and such high tech innovations as cabins with Magical Portholes for virtual views and artwork that springs to life with animation.

All that good stuff remains—including the Aqua Duck coaster, a 765-foot long twisting ride above the upper decks. But Fantasy also stands alone as the first Disney Cruise Line ship built specifically for week–long itineraries—Dream as well as the earlier 1,754–passenger Disney Magic and Disney Wonder were designed for three- and four-day cruises, which passengers would combine with a theme park stay.

The tweaks on Fantasy mostly reflect the ship as its own destination—with more for passengers to do on their shipboard vacation. Here's what's new:

Kids of course will get star treatment on the ship with activities day and night including at the Oceaneer Club and Oceaneer Lab (for kids ages 3–11). There are separate clubs for 'tweens and teens, and the ship also has a nursery. Little is changed in these spaces from Dream—but it was fun touring a construction site with giant "Toy Story" characters already in place.

On the open decks, new features include AquaLab, a wet play area for families with two–dozen water jets, leaking walls with holes kids can try to plug, a leaky boat and spill buckets. Despite the fact most of the features weren't yet in place on our shipyard tour, it was easy to imagine squeals of delight from kids. Cleverly, there's a parental viewing area above for any adults who don't want to get wet.

At the popular Animator's Palette, where the dinner show features animation, including a talking "Crush," we got a preview of a cool new feature that will allow guests to create a cartoon character on their placemats and see it automated as part of the show—your creation will march, dance and wave with Mickey and other animated Disney characters on the restaurant's video screens. This will no doubt awe the kiddies, and many adults too (pre–debut the software has already won a peer award).

Of course there will be plenty of opportunity for kids to spot Mickey and Minnie et al around the ship including in the fanciful Art Nouveau–inspired atrium lobby—where a bronze statue of Mademoiselle Minnie in vintage attire will provide the must–do photo opp.

Lest you think Disney would miss a marketing opportunity, "The Muppets," including Fozzie and Gonzo, will be shipboard too—as part of an interactive video game that has kids uncovering clues hidden in animated artwork around the ship to solve a mystery.

Across the ship, above the adults–only pool (there are also pools for families and kids) is another new wet spot, a small family wading pool that will entertain with mist and bubbles. New shaded areas nearby will hold loungers for those who want ocean breezes without sun.

Above that is a new wet schmoozing spot for adults, a 24–inch deep pool with a waterfall feature and circular bench where you can enjoy a drink from the nearby bar while soaking your legs. It's cleverly located around the ship's real TV satellite.

As on the earlier ships, the Disney Fantasy will feature the line's unique rotation dining system, which has passengers dining in three different themed restaurants, their wait staff moving along with them.

A surprise when the Disney Dream debuted last year was how much space was dedicated to adult passengers—the pool area, a fancy spa, two adults–only alternative restaurants (Palo and Remy) and a nightclub area.

The nighttime area is expanded even more on Fantasy, where it's Europe–themed and called Europa. Adults will beable to mingle at night in a posh champagne bar called Oooh La La, an Irish pub/sports bar called O'Gills, a Skyline bar boasting virtual skylines of major European cities and a London subway–themed disco, The Tube. You enter the district via the La Piazza lounge with a carousel bar as the centerpiece (nope, the carousel does not move).

Moving to a seven–day cruise focus, Disney is enhancing entertainment offerings on Fantasy to include a new 45–minute Broadway–style musical, "Wishes," about the importance of adults recognizing their inner child, and featuring original music as well as numbers from "Tangled," "Pinocchio," "The Little Mermaid," and other Disney movies and TV shows.

Fantasy will also debut shipboard "Disney's Aladdin—A Musical Spectacular," from Disneyland. The shows are in The Walt Disney Theatre, equipped for all sorts of stage wizardry and creative use of animation. Cruise line officials told us on the shipyard tour you'd be hard–pressed to find a more technologically advanced theatre anywhere.

Another new feature may not appeal to parents on a budget. At the Bibbidi Bobbidi Boutique and The Pirates League (inspired by similar venues at the Disney parks), kids will be able to get a complete Disney princess or pirate makeover including costume, hair, makeup and accessories–paying for each item you say "yes" to. As on the other ships, "Mickey's Pirates IN the Caribbean" is a highlight deck party with fireworks—costumes optional.

The Disney Fantasy will sail from Port Canaveral on week–long cruises alternating eastern (St. Maarten and St. Thomas) and western (Grand Cayman, Costa Maya, Cozumel, Mexico) Caribbean itineraries. All the cruises stop at Castaway Cay, Disney's private islands in the Bahamas. Fares are from $959 per person for the first two in a cabin, less for 3rd and 4th passengers.