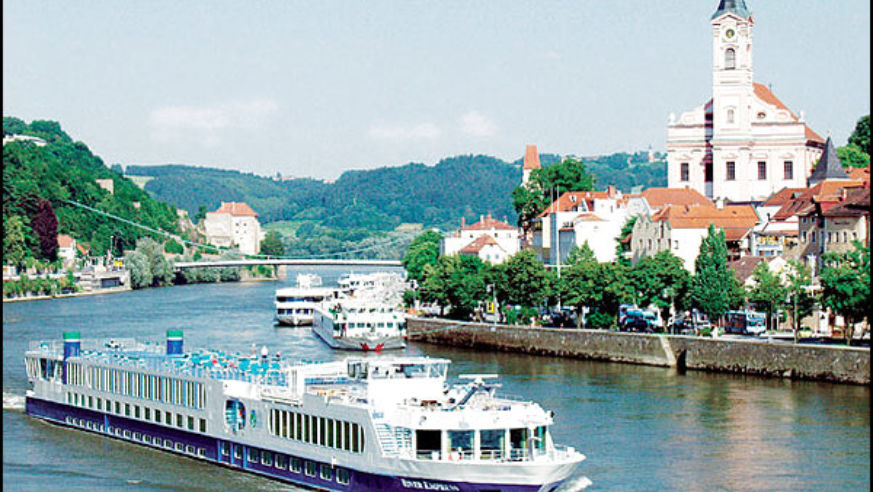 Slowing down comes second nature in the Old World--and there's no better way to take it easy than on a nice, calm river cruise

Because the boats rarely carry more than 200 people--10 times fewer passengers than the average ocean liner--river cruises are decidedly more intimate. They're also less frenzied; the main activities are relaxing on deck and low-impact sightseeing. "It's neat to sit and watch people fishing, kids playing, and other boats going by," says Shirley Linde, author of The World's Most Intimate Cruises. Some of the newer riverboats do have gyms or pools, but most are without the bells and whistles of ocean cruisers. Entertainment, such as it is, comes in the form of a piano bar, cultural lectures, or the crew doing cute song-and-dance routines from their homelands. You'll be fed well, but not constantly (no 24-hour buffets). Typically there's a single restaurant serving a buffet breakfast and lunch, and a multicourse dinner with a choice of entrées. Dress is almost always casual.

Can a river cruise sub for a traditional tour?

Whereas big-ship cruises in Europe often stop far from the actual destination--the port of Civitavecchia, for example, is an hour from Rome--the major plus of a riverboat is that it pulls right into the middle of preserved medieval towns such as Bamberg, Germany. The downside is that these aren't big-ticket destinations. If you have your mind set on seeing the Parthenon or Big Ben, then no, a river cruise doesn't work. River cruises explore smaller towns and villages, and give a terrific feel for the Old World. Like traditional guided tours, river cruises sometimes offer special-interest itineraries that focus on wine, gardens, or classical music. But on a boat you don't have to switch hotels every few days. "It's a great way to experience different cultures," says Eike Grabowski, a travel agent from Shallotte, N.C. "I'm not crazy about getting up at 6 a.m. and putting my luggage outside the door."

Where are cruises offered?

Popular options are the Danube, often combined with the Main and featuring visits to castles and gothic cathedrals in Hungary, Austria, and Germany; the Elbe, which meanders through Germany and the Czech Republic and stops at Dresden, completely rebuilt from the notorious bombing in World War II; France's Rhône and Saône, taking clients through the scenic regions of Provence and Burgundy; the Seine, for Paris as well as Claude Monet's hometown of Giverny; the Po in northern Italy, frequently themed around opera; and Russia's Volga River, connecting Moscow and St. Petersburg. A more unusual choice is Portugal's Douro River, where vineyards and wild, undeveloped landscapes are the backdrop.

Barges are smaller (6 to 50 passengers), slower (max of around 5 mph vs. 12 mph on a river cruise), and are usually seen on narrow waterways, notably in France. Private groups often rent an entire barge, and because the vessels are so easy to navigate, self-drives are possible. Brokers such as The Barge Connection book self-drives starting at around $2,000 a week for a six-berth barge, as well as crewed voyages that, depending on cabin sizes, amenities, menu, and staff, cost $1,600 to $5,000 per person per week.

For journeys lasting 10 days or longer, the average passenger is educated, well-traveled, and over 60. Weeklong cruises attract more folks in their 40s and 50s, as well as occasional young couples. Families with children are uncommon, and some lines don't even allow anyone under 12 onboard.

Will everyone speak English?

Crews on all ships will speak some English, and the staff on lines such as Viking River Cruises, Uniworld, and Avalon Waterways, all of which cater to the North American market, will be fluent. Operators based on the Continent, such as CroisiEurope, attract mostly European passengers, so you may not be able to communicate with everyone.

Standard cabins on ships built in the 1980s can be as small as 90 square feet, while the average room on many new boats is 200 square feet. Nearly all lines offer only outside cabins, so you can expect a window and a view. The cheapest rooms are just above water level, where the scenery isn't as good. Riverboats are narrow, so they rarely have room to provide balconies. It's standard for cabins to come with a hair dryer, air-conditioning, and TV.

When should I go?

The peak seasons are late spring and early fall, when temperatures are neither too hot nor too cold. You'll find the cheapest prices during the iffy periods of early spring and late autumn, and some lines have discounts during the hottest weeks of July and August. (The savings might be negated because that's when airfare costs the most.) Many passengers plan their cruises according to the agricultural cycle. "If you're interested in wine, you may want to go when the grapes are being harvested in the fall," says author Linde. "And if you want to see tulips in Holland, go in April."

It depends on the cruise line and the season. Avalon, a middle-of-the-pack line, has a seven-night "Tulip Time" cruise through Holland and Belgium starting at $1,600 per person. Viking, which offers a similar level of luxury, lists promotions on its website, sometimes bringing rates down to less than $1,000 for a week. Grand Circle Travel, a general tour operator that markets to Americans 50 and older, offers nine different river cruises in Europe, sometimes for as little as $1,000 with airfare from New York. The international clientele of Sea Cloud Cruises are used to paying over $3,000 a week for outstanding food, sophisticated atmosphere, and huge cabins with marble floors in the bathrooms.

The cruise price covers three meals per day, and oftentimes afternoon tea, wine at dinner, and guided excursions. Tips are not included. There'll be an envelope in your cabin for gratuities; the standard is for each passenger to leave around $10 per day--preferably in the local currency.