In the past three years, about 5,000 minimum-security inmates have traveled between prisons on Greyhound and other bus lines.

Only inmates who are near their release date and who are judged to be "a minimum security risk" are sent on commercial buses.

Some bus owners are upset. Bus operators do not accept on their coaches "unguarded prisoners still serving time for their crimes," a spokesperson for their association tells Budget Travel. Greyhound and hundreds of other bus operators did not know about this practice until this spring, the spokesperson adds. The story was broken by investigative reporters with the Dallas/Ft. Worth TV station WFAA.

But it will be difficult for bus drivers do anything about the practice. The inmates are on furlough, and during a furlough an inmate can wear ordinary personal or work-release clothing. In other words, no one would recognize these passengers as prisoners by their dress.

The Federal Bureau of Prisons has not changed its practice of buying bus tickets for inmates, despite a letter of complaint from the bus owners' group. A spokesperson for the Bureau of Prisons says that using their staff or any other type of escort would be an unnecessary cost to the taxpayer. The Bureau spends more than $1.5 million a year on bus tickets for inmates from all 114 of its institutions.

It turns out that there are two types of inmates traveling by bus.

The first group is not controversial. These are inmates leaving prison for good, heading to halfway houses (listed here), where they're able to find jobs, attend medical appointments, and sign up for schooling. These inmates have served their allotted jail time. They travel without escorts. The federal government bought bus tickets for about 84,600 of these inmates in the past three years. And America's major bus lines don't mind these passengers. If an inmate has "paid his or her debt to society" and is "deemed rehabilitative," they're welcome to ride, says a spokesperson for the bus owners's association.

Out of this latter group of prisoners, a few do escape from the buses as they travel between prison camps. For example, between 2003 and 2005, 77 inmates escaped en-route and 19 of them were not immediately taken back into custody, reports the AP. But a spokesperson for the Bureau of Prisons says these numbers need to be put into perspective. Less than 0.2 percent of inmates fail to report to their intended location. In other words, it's a rare occurrence. When inmates abscond, they run the risk of being re-captured and returned to a higher security institution than they had previously been in.

Note: Maximum-security prisoners are never transported by commercial bus. Those prisoners are always escorted by armed officers from prison to prison, says a Bureau spokeswoman.

Greyhound has asked federal authorities to stop using its buses. Its officials remain concerned and "support[s] the industry's efforts to put a stop to it," a company spokeswoman tells Budget Travel. Greyhound has worked informally with the Bureau of Prisons in the past by escorting completely released prisoners from institutions, but has never had a corporate contract, a Greyhound spokeswoman told Budget Travel. (As noted above, Greyhound isn't only company used to transport prisoners. Other bus companies and taxi services around the U.S. are used, too.)

What do you think about the federal policy of sending inmates via major bus lines along with other passengers?

The story was broken this spring by a Dallas/Ft. Worth TV station, WFAA, whose reporters followed one inmate traveling on a bus for 30 hours and 55 minutes.

This weekend: Let out your inner artist at Figment in NYC

If art museums and stodgy art galleries aren't really your thing, be sure to check out Figment on Governors Island in New York City this weekend. The celebration, now in its third year, was created as an alternative to the city's traditional art scene&mdash;the completely free outdoor event encourages collaborative and participatory projects. Attendees essentially become artists for a day. The festival's name comes from Andy Warhol, when he was asked about his tombstone: ''No epitaph, and no name. Well, actually, I'd like it to say 'figment.' " There are a ton of events and projects scheduled, starting on Friday. They range from something as simple as a coloring table or a community poem to the elaborate-sounding Chorus in a Box, where participants dial their cell phones to get a looped tape of a song, which they are then encouraged to sing (or something&hellip;sounds like you have to be there). Some other interesting activities include Hula-hoop dancing, a Plant Parenthood adoption event, and a Frisbee-designing session, sponsored by the Children's Museum of Manhattan. There's also an artist-designed mini-golf course and a sculpture garden. The 2008 celebration attracted more than 10,000 participants, and organizers say they're expecting more this year. The only thing they ask you to bring? Your creativity (and maybe a snack). Another happening of note in New York City this weekend is the World Science Festival with speeches by prize-winning scientists and other programs. Figment is Friday through Sunday and free. There's a free ferry to Governors Island. For more info, go to figmentnyc.org. 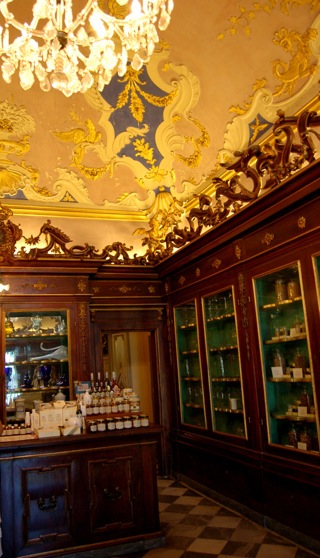 A resource for traditional shops in Florence

Florentines are proud, even snobby, about the city's heritage as a Renaissance leader in the arts, banking, and diplomacy, and they can be slow to warm to outsiders. I quickly pieced this together during a year abroad: My orientation leader, who grew up near Milan, joked that even after 20 years as a resident, he wasn't considered a Florentine; my neighborhood supermarket gave out a Toscani da sempre calendar with archival photos (translated literally, "Tuscans since always"). This same protective pride&mdash;along with interest from tourists&mdash;has helped sustain iconic Florentine businesses, including pharmacies, paper and ceramic workshops, and caf&eacute;s that follow centuries-old methods. The revamped bilingual website Esercizistorici.it makes it easy to plan a historic shopping outing. You can search by district or by type, and read in-depth tours. One-minute video clips take you inside businesses like Casa dei Tessuti, a venerable source for fabrics and custom-made clothes, and Il Latini, a fourth-generation trattoria. PREVIOUSLY What $100 Buys in&hellip; Florence

Israel's national carrier El Al Israel Airlines saw passenger traffic drop 13 percent because of fighting in the Gaza Strip and the global financial crisis, says Reuters. But the airline is hoping to drum up business with a brief fare sale. The discount is impressive: Fly roundtrip flights to Israel from New York City or Los Angeles this September. Travelers can save up to $200 on certain nonstop flights. The L.A. Times Daily Travel &amp; Deals blog found that sale fares "from LAX begin at $1,099 per person (including all taxes and fuel surcharges)" a savings of even more than $200. It's first-come, first served, for this sale (which started this morning) and which lasts until Thursday, June 11 at Midnight ET. You'll find the deal on on this special page on El Al's site. EARLIER Flights for half off in the U.S. Book by Friday

Flights for half off! Book by Friday

An upstart carrier we've profiled in the past&mdash;Direct Air&mdash;just announced a half-off special for flights this summer and fall. Since most Direct Air flights cost $79 or $99 each way to begin with, this is really a chance for a bargain. Direct Air flies primarily from South Carolina (Myrtle Beach) and Florida (Orlando-Sanford and Punta Gorda) to gateways in the Northeast and Midwest. Within minutes, we were able to find flights such as Worcester, Mass. to Myrtle Beach and Kalamazoo to Orlando for under $130&mdash;round trip, with taxes and fees included. This is one of those promos that requires a booking code, so remember to type in FALSAL in the promotion box at the airline's website. The code is valid for bookings made by midnight on June 12, good on flights through October 31. The beach awaits. And if 50 percent off isn't good enough for you, maybe a $9 flight will do the trick.