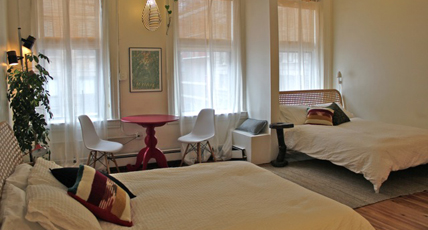 For all of the great attractions New York City has to offer tourists, a choice of appealing, reasonably priced accommodations has never really been one of them.

But that may be changing, thanks to a slate of new hotels opening up in Harlem and the outer boroughs—Brooklyn and Queens, in particular.

In fact, about 40 percent of the new properties scheduled to open in New York this year are located outside of Manhattan, according to new data from NYC & Company—the official marketing and tourism organization for New York City.

The opening of Aloft Harlem last spring seemed to kickstart the trend. The 124-room hotel is located on Frederick Douglass Boulevard, alongside a stretch of new bars and restaurants in the up-and-coming Harlem neighborhood. Central Park and the classic Apollo Theater are just a short walk away, as is bustling 125th St., where you can catch many subway and bus lines to the rest of Manhattan's attractions. Rates for doubles go as low as $170.

The Aloft brand—which is run by the chic company behind the W—will expand its footprint in New York this summer with Aloft New York Brooklyn, its 50th boutique-style hotel around the world. The 176-room Aloft is located in Downtown Brooklyn, just a short walk away from the iconic Brooklyn Bridge and the locals' favorite, Junior's Most Fabulous Cheesecake and Desserts restaurant. Numerous subway and rail line connections are nearby, as well. Bonus: The hotel's rooftop terrace bar will offer panoramic views of the Manhattan skyline. Rates start at $169 per night for a double room.

The Downtown Brooklyn neighborhood will also be welcoming a new B&B this summer, called 3B. The hotel is run by eight young artists and writers, who live nearby, and has high ceilings, wood floors, and large windows, with lots of natural light. 3B has four rooms—two private rooms with a queen bed, one private room with two single beds, and another room with two bunk beds for up to four travelers. A complimentary breakfast is served each morning. Rates start at $120, including breakfast.

A number of chains are also getting in on the outer-borough action. Best Western Plus opened a hotel in Brooklyn's Prospect Park neighborhood in December, 2010, and Fairfield Inn & Suites and Sheraton will follow suit with Brooklyn properties of their own later this year.

Would you sightsee in New York City, but sleep in Jersey City?

A reader has a question about the U.S. government requiring airlines to give fatter payouts to passengers who get involuntarily "bumped" from oversold flights. As Budget Travel recently reported in its story, "8 Common Air Travel Snafus (And How to Beat Them)," the DOT has increased by hundreds of dollars how much airlines have to pay passengers for bumping them off an oversold flight against their wishes. Starting this August, most bumped domestic fliers who get to their destination more than an hour late than planned must receive double their one-way fare back, up to about $650 in cash. Delayed much longer? You'll get four times your one-way fare, up to $1,300. But in most cases, you'll have to go to an airport customer desk and demand what you're owed. Here's the great question about this from Romeo Raabe in Green Bay, WI: In this and many other articles about being bumped off an airline, I've read to only take cash. Please define "cash". Does this mean I must demand cash, greenbacks, US currency? Or a check, in my hand, or promise of being mailed to me? What, exactly, is cash? I'm sure other readers wonder about this too.The answer: You want cash&mdash;as in, the green stuff you hold in your hand. (While a paper check or direct deposit would probably also be legal in theory, no airline we know of gives its airport service agents the power to write checks or issue direct deposits in its name. Cold, hard cash is what you want and what you can reasonably expect.) Last year, 59,250 passengers qualified to receive cash compensation by being bumped against their will. Airlines rarely paid out cash to these fliers, though. They instead wooed passengers with voucher credits for future flights. The problem with these flight vouchers&mdash;which work like gift certificates&mdash;is that they come with more restrictions than cash. There may be an expiration date on the flight voucher. You'll have to use the voucher on that specific airline&mdash;even if the lowest fares for your upcoming trips may be on other airlines. You'll probably have to make the reservation over the phone if you're redeeming a voucher. In short, how sure can you be that you'll be flying this particular airline again soon enough to be able to use the voucher? Rather than worry, just ask for cash. Cash is specifically what the DOT says in its rules that airlines must be able to pay out. (For international trips, an airline must get you to your destination within one hour of your scheduled arrival time. After that, it must pay you compensation of double your one way fare up to $650. For delayed arrivals longer than four hours, you are entitled to four times the value of your one-way ticket up to $1,300.) MORE FROM BUDGET TRAVEL 8 Common Air Travel Snafus (And How to Beat Them) New Budget Airline Vision Delivers Cheap Fares Quiz: Can You Spot the Travel Rip-off? 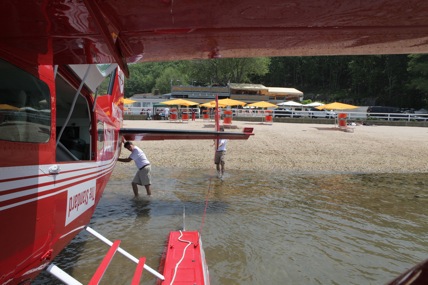 Gamble on a flight from New York to the Hamptons

Andre Balazs' Standard hotel in Manhattan is launching a summer seaplane service to the Hamptons, and is offering passengers the option to play its "Flight Board" game for a shot at seats as low as $30. The flights are on board a bright red, eight-passenger Cessna seaplane called StndAir. Passengers can sign up to play the Flight Board for a chance to book off-peak flights between 9 a.m. and 7p.m., Tuesdays, Wednesdays and Saturdays. Flight Board flights are also available Sunday mornings and Mondays after noon. "Seat prices increase as the plane becomes full, so join early for the best rates," the StndAir website advises. "Your flight can be bumped off the board if someone takes your desired time slot and charters the entire plane in full, or gets seven friends onboard before you do." Flights on the Flight Board that depart on Friday, July 1, for the Fourth of July weekend, for instance, currently range from $30 to $295 each way, depending on how full the flights are, and contingent on them filling up and later bookers being willing to throw down even more. Flight Board destinations include East Hampton, Shelter Island, Montauk and Nantucket. And while the Flight Board offers a chance for seats as low as $30, regularly scheduled flights between New York and East Hampton cost $495 each way with between one and four departures daily, depending on the date. The service started this past Memorial Day weekend and runs through Oct., 2011. The StndAir is available for charter service to any East Coast destination within a 300-mile radius of New York, which includes Nantucket, Martha's Vineyard and Cape Cod in Massachusetts, as well as the Hudson Valley. The plane is operated by Shoreline Aviation as part of their FAA Part135 Air Carrier Operations. Flights depart from and land at New York Skyports Marina, located at 2430 FDR Drive on the East River at 23rd Street (the dock is to the left of the Gulf Gas Station at 23rd Street). More from Budget Travel: Will you be flying this summer? Summer fares: Book now or wait? 10 Beach Products You Never Knew You Needed

Since launching the program last fall, Travelzoo has been expanding its Local Deals program. As of this week, the company now touts deep discounts on restaurant, spa, and (increasingly) hotel offers in 75 locations worldwide. You can sign up to receive alerts for offers within a two-hour drive or short flight from your hometown. (These alerts differ from the company's famous Top 20 travel-deal e-mail newsletters.) For any offer, you have a few days to buy vouchers that can be later redeemed at the local store. You can use Travelzoo Local Deals in two ways: To keep track of discounts near you to plan a "staycation," or to track deals at a location you're planning to visit. The free program works similarly to Groupon's upcoming vacation deal service, but the deals tend to be on higher-end products and services. Recent sample deal: The Chelsea in Atlantic City was available for one night with a three-course dinner for two at its well regarded restaurant and access to the spa for $189 midweek or $299 on Fridays. That was a savings of more than 30 percent off of what I found when I attempted to book the components of the deal separately. Travelzoo has about 26 23 million newsletter subscribers in the US and Europe. Has anyone tried the Local Deals service and had good results? MORE FROM BUDGET TRAVEL Open secret websites for booking hotels Eight ways to save when booking hotel rooms What to do when you lose all of your digital photos 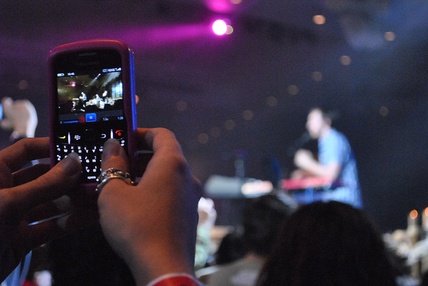 Have you ever noticed people at concerts using their smartphone cameras to capture the moment? (Admit it, you've probably done it, too.) Now, a patent filed by Apple aims to use infrared sensor technology to prevent people from recording a performance or snapping a photo. According to a New York Times article, the patent applies to any mobile device made by Apple that has a built&ndash;in camera&mdash;that means any iPhones, iPads, or the iPod Touch. Here's the plan in a nut shell: Rather than recording a video clip of your favorite artist's performance, sensors coming from the stage will temporarily block the camera's recording features. The idea is to maintain the artist's rights and prevent bootlegged performances from getting online. (Technically, the idea could also be extended to include Broadway shows and movie theaters if bootlegging is the real problem.) Apple is also considering using the same infrared sensors to embed a watermark into any photos taken at such venues as museums, zoos or aquariums, not necessarily a bad thing if you're on vacation and can't remember where a photo was taken. Another idea regarding photography at museums uses sensors to deliver information about the painting or artwork you're interested in taking a picture of. The patent was filed by Apple in 2009 and published by the United States Patent and Trademark Office on Thursday, June 2nd, 2011. An article by The Washington Post stresses the fact that this is just a patent filing, "which means it's far from certain that the company will actually use the technology at all." I reached out to Apple to get their take on this topic and was told that they are unable to provide an official comment at this time. Personally, I don't like the sound of this one at all. First of all, if I'm willing to spend my hard&ndash;earned money on a piece of fancy technology, don't I have the right to use it? It's not like the quality is up to par with media-level photography. Besides, what if I just want to take photos of my friends at the concerts? If I'm paying for a ticket to a concert, shouldn't I have the right to snap photos of my friends at the venue? Shouldn't I be able to share a clip of the evening with my friends via social media or email a quick picture of a beautiful statue without having a watermark in the way? What do you think of this? Do you think Apple is on to something or is the company taking things too far? MORE FROM BUDGET TRAVEL iPads Take on Hotels, Airlines and the Eiffel Tower The Ultimate Guide to Travel Apps Test Lab: iPad as Travel Tool