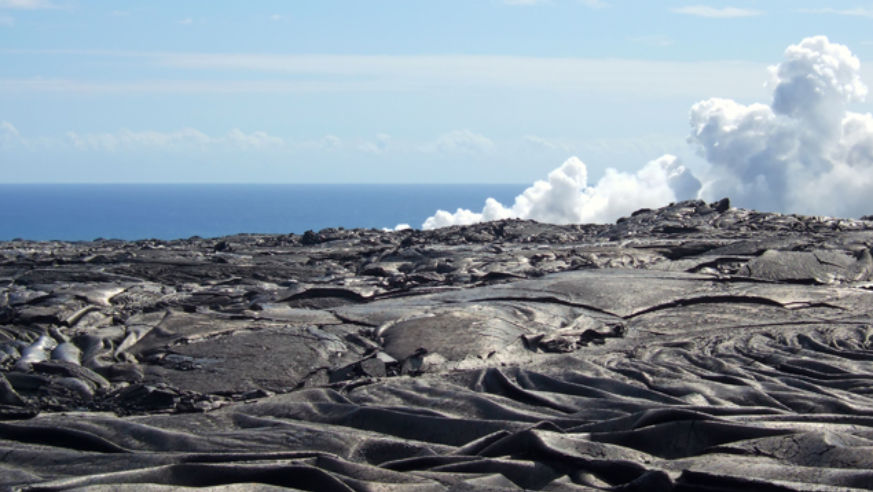 The Big Island offers amazing adventures, including Hawaii Volcanoes National Park, where you can walk on a volcano!

It's two hours before sunrise in Hawaii's Volcanoes National Park (808/985-6000, nps.gov/havo, entrance fee $10 per vehicle). The winds are gusting, and stars fill a rare cloudless sky. For a place that's all about heat and fire, Kilauea Volcano is surprisingly cold—and nobody comes to Hawaii for the cold. But the blackness of the night is the best time to experience one of the world's most active volcanoes. A column of gas, steam, and ash pours out of Halemaumau, the caldera's largest crater. The red-and-orange glow from Halemaumau's lava lake reflects off the plume, and, as the wind ebbs, you can hear the moan of molten lava and boulders roiling inside the crater. According to Hawaiian legend, Pele, the volcano goddess, lives in Halemaumau. Alone in the darkness—half-awake and caught somewhere between dreams and the plume's hypnotizing dance—it's easy to feel her power. She seems a bit restless, too.s

Kilauea doesn't really look much like a world-class volcano, either. At a mere 4,000 or so feet above sea level, it is less than a third the size of the Big Island's fraternal twin volcanoes, Mauna Kea and Mauna Loa. It comes off as a bit wan compared with the stately, conical profiles of Mt. Fuji and Vesuvius. But for sheer drama, Kilauea stands above all other volcanoes. "There's a sense of the unknown: It could shut off tomorrow, or something much more dramatic could happen," says Andrea Kaawaloa-Okita, a Hawaii Volcanoes National Park ranger for the past 17 years. "It's this open book, and the story has yet to be written. Tutu Pele is saying, 'I'm still here. This is your little reminder. But I'm going to leave you hanging.'"

Tutu is a Hawaiian term of endearment, which might seem odd considering Kaawaloa-Okita's experience. Her family has lived in Kalapana, a nearby historic village, for five generations. As a young girl, she woke up to the sound of Pele's fire fountains and was lulled to sleep by them at night.

But the 1983 eruption was a slow-motion disaster. The flows kept coming, closer and closer. There were evacuations, and many of Kaawaloa-Okita's relatives lost their homes. For her, the grief for the loss of ohana ("family") and the scattering of her kin was greater than the sadness she felt as the lava buried her home. "We always knew that Tutu Pele could reclaim what is hers," she says.

Looking back, Kaawaloa-Okita sees a certain inevitability in her decision to work at the park (she's the third generation to do so in her family) and become a geologist. She speaks of fate and the curiosity that came with growing up with lava all around her. What is more surprising is that she has moved back to Kalapana, even as lava continues to flow from Pu'u 'O'o. "It's what I know to be home," she says.

In a way, Kaawaloa-Okita's journey gets at the heart of Kilauea's essence. The volcano is more about renewal than devastation. Life finds a way here, whether in the rain forests filled with crimson 'apapane and 'i'iwi birds or along the lava itself, where nene, the world's rarest goose (2,000 exist), find 'ohelo berries to feed on. Kilauea has been called the Drive-In Volcano because of its easy access, and the park itself is suffused with trails. But when Halemaumau began erupting full force in 2008—its first significant, ongoing eruption since 1924—the Park Service closed the trail across the caldera. Just to the east, however, you can still hike across the floor of a crater at Kilauea Iki, where a 1959 eruption sent fountains of lava 1,900 feet into the sky.

The trail begins high above the crater and descends through native rain forest, a sliver of ancient Hawaii. Purple shoots of uluhe ferns, their unfurled fronds coiled in tight spirals, poke up from the understory, and the 'apapane birds harmonize in a sweet chorus heard nowhere outside Hawaii. The forest evolved largely in isolation from the rest of the world, and its lack of major predators (and surprisingly few bugs) gives it an Eden-like feel—only without the snakes.

The transition from paradise to Hades is abrupt as the trail drops into the crater. It feels like something out of myth: A cracked, barren landscape of black lava made even creepier by a veil of fog. Steam rises from vents and fissures and a lake of magma bubbles just a few hundred feet beneath the crater floor. Get down on your knees to take a photo and the lava's jagged edges feel as sharp as glass.

But like Kaawaloa-Okita returning to her ancestral village, the rain forest is slowly reclaiming the crater. Scrubby 'ohi'a, a fraction of the size of their tree-size rain-forest brethren, are pioneering the rock. Colonizing ferns trace zigzag patterns of green along cracks where enough soil and nutrients have settled for them to take root. Fifty years ago, temperatures in the crater reached 2,200 degrees. But someday, the 'apapane may sing here, too.

Because visitors spendan average of only six hours in the park, it's difficult for them to imagine living on an active volcano. Of course, Hawaiians have been doing just that for centuries. Not far from the end of Chain of Craters Road, a trail leads to the Pu'u Loa Petroglyphs, which feature more than 20,000 carvings of human forms and boats, and, most unusually, piko holes, once used to hold the freshly cut umbilical cords of newborns.

Today's population is centered on Volcano Village, the park's gateway community. Houses and cottages are tucked so deeply among the trees that residents sometimes see one another only at the Sunday Farmers' Market—a tropical cornucopia of mango, papaya, and dragon fruit (19-4030 Wright Rd., thecoopercenter.org, Thai chicken soup $5 a bowl, Sundays 6:30–10 A.M.).

Idyllic, perhaps, but with more than 100 inches of rain a year, periodic warnings about volcanic smog (known as "vog"), frequent small earthquakes, and an erupting volcano down the road, it's a town that comes with more than the usual homeowner headaches.

The village's demographics reflect its unique circumstances. There are scientists, park workers, New Agers, and an intrepid community of artists: painters, woodworkers, and printmakers. Many artists display works at the Volcano Art Center Gallery, located in an 1877 structure built as the successor to the thatch inn where Twain stayed (Crater Rim Dr., Volcano, volcanoartcenter.org, woodblock prints by printmaker-painter Dietrich Varez starting at $5).

When ceramist and Memphis native Tim Freeman visited the volcano in 1991, the clouds parted just in time for a solar eclipse over Halemaumau. The crater's steam plumes suddenly stopped drifting sideways and rose in columns straight into the sky. "This is a magical place," he says. "It has moved me deeply for years."

Freeman settled in Volcano Village in 2001 and now teaches philosophy at the University of Hawaii-Hilo. His vase-like works evoke the volcano itself. The rims mimic the volcano's contours, and he colors the round interior base a lava-like reddish orange. He fires his pieces in underground pits, using wood from faya trees and other invasive species he's cleared from the forest. "I'm trying to express my appreciation for living here and the almost pristine character of the area," he says. "It gives a sense of the fragility of nature. I'm blown away by the beauty of this place."

The notion of a fragile beauty is at the heart of the Kilauea experience. Even a single overnight can reveal its ephemeral ways. As darkness comes to Volcano Rainforest Retreat a few miles from the park, drizzle brushes the canopy of ferns and mist drifts through the trees. Buddha statues and the ceramic masks of Volcano Village artist Ira Ono add to an aura of the sacred and whimsical.

Around midnight, thunder rocks the forest as a storm slams into Kilauea, then just as abruptly ends an hour before sunrise. Along the rim of Kilauea Caldera, Halemaumau puffs away as two nene suddenly wing overhead. Thirty miles in the distance and 10,000 feet above Kilauea, Mauna Kea rises over the rain forest. Free of clouds, its summit is covered with snow washed by the pinks and golds of dawn. "The face of Kilauea is always changing," Kaawaloa-Okita says. "There are moments in time that cannot be re-created. That's part of the marvel. And you want to give yourself every opportunity to experience those marvels."

10 Natural Phenomena You Have to See to Believe

10 Most Precious Places on Earth