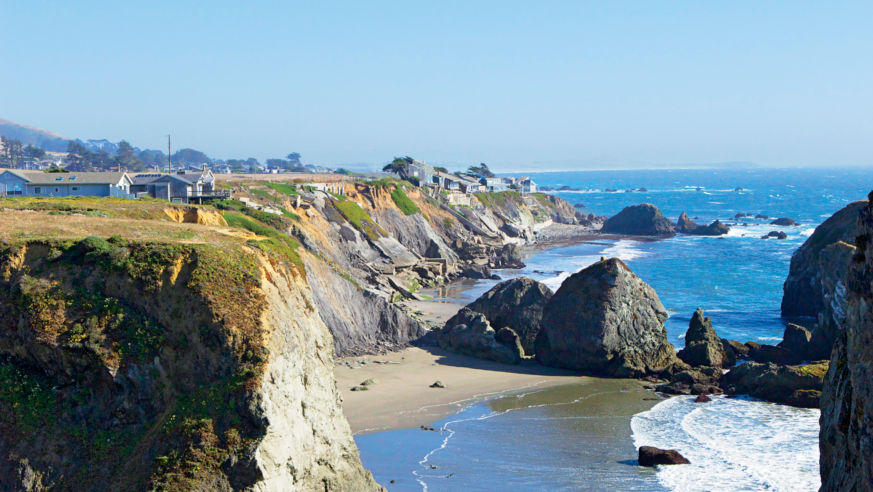 Overlook on the California Coast, north of San Francisco.

Even the famed Pacific Coast Highway has a road less traveled: the wild miles north of San Francisco.

You start to feel it about an hour after crossing the Golden Gate Bridge: a kind of kick-off-your-shoes, carefree freedom that comes from cruising along the edge of the earth. Oh, maybe it's mixed with a tinge of nausea, but a few hairpin turns are a small price to pay for endless views of the ocean. After all, this is Highway 1—the Pacific Coast Highway—that drop-dead gorgeous, wildly snaking road that follows the sea almost every inch of its way.

The central stretch from Monterey to Big Sur gets all the glory (and the well-heeled crowds), but head north and things start to get funkier and more affordable. Flat-out unfashionable, really, in a charming, time-warp '70s sort of way, where washed-out roadside motels with names like Surf and Sand still tout "free color TV" on their peeling signs, local radio stations play Steve Miller Band, and people read the newspaper in print, not on an iPad. The landscape, too, remains unchanged: the craggy cliffs, the golden hills, the grazing cows, the I've-got-to-snap-a-picture lookouts.

But it's really the quirky, old-fashioned communities that make this stretch of Highway 1 so special. The town of Fort Bragg, 170 miles north of San Francisco, is a prime example: Nine years ago, Fort Bragg's sprawling oceanfront lumber mill shut down, and Pacific Ocean views once obstructed by smoke stacks were opened up to the public. Now green spaces and walking trails are scattered across town, along with new restaurants, boutiques, and beachfront bike paths. Fort Bragg is a town in transition, no doubt, but somehow it's maintained its low-key spirit—a refreshing surprise on the sometimes chichi California coast. Best of all, you can get a room with an ocean view for less than, say, lunch at a spa down south. At least for now.

The traffic in San Francisco only makes the open vistas to the north all the more spectacular. Just across the Golden Gate Bridge, convertibles bound for wine country clog the lanes. Then, it's stop-and-start past auto shops and Applebee's, until about 60 miles north, when you reach Highway 1 and the road narrows to a rolling two-lane past cattle fields and cyclists, into the country and out to the coast.

Near the town of Jenner, Highway 1 edges a bluff where the Russian River intersects the raging Pacific, and my friend and I can't resist a quick stop. The pull-out has room for only a handful of cars—no bus tours or caravanning RVs could fit if they tried. The water is a tropical turquoise blue and kayakers paddle peacefully below. A guy next to me shoves his binoculars in my hand: "Check it out!" he exclaims, pointing to a smooth black hump surfacing every so often. "See it?!" Camaraderie among strangers, it seems, is not uncommon here. There's the shared thrill over whale sightings, yes, but also an unspoken feeling of luck.

Hunger strikes right around the time you see Stewarts Point Store, a yellow clapboard shop that dates back to 1868 (32000 S. Hwy. 1, 707/785-2406, turkey-cheese-avocado sandwich $8). Owner Charles Richardson, a smiley, Carhartt-clad fifth-generation son of the original propietors, stocks the shelves with a mix of the retro (glass bottles of grape Crush) and the gourmet (cheeses, salamis). If it were a Friday, we could've joined a dance-hall dinner held weekly upstairs. Instead, it's a lazy Sunday, so  we head for the town of Sea Ranch, a 10-mile windswept bluff scattered with austere, 1960s architecture that blends so respectfully into the land you could very well miss it.

Built out of cedar and redwood, the Sea Ranch Lodge may be the best-value inn on the Sonoma-Mendocino coast, where a frilly room with an ocean view usually runs at least $250 (60 Sea Walk Dr., searanchlodge.com, from $149, including breakfast). Weathered Adirondack chairs at the water's edge are made for sipping wine, and most of the 20 cozy rooms have woodstove fireplaces and overlook the Pacific. As the moon reflects on the water, I thank the zillions of stars we paid only $149 a night.

With a dilapidated-looking "day spa," a very-much-still-in-business video store, and a better-than-decent BBQ joint, the town of Gualala, about six miles north, is a booming metropolis compared to Sea Ranch. The kind of 2,000-resident town where your waitress tells you she's lived forever and restaurants tend to empty out before 9 p.m. A few miles north, we get the sea lions, tide pools, and coastal hiking trails all to ourselves at Stornetta Public Lands; there isn't anyone else at Bowling Ball Beach either. Maybe because we just miss low tide, which reveals a sea of symmetrically round boulders that give this often photographed spot its name.

To call Point Arena a town is a bit of an overstatement. It's basically a single strip consisting of not much more than a co-op grocery, homemade-jam stand, and historic theater. We find the real entertainment just up the hill: a 110-acre park where zebras and antelope roam. Owned by a couple dedicated to giving displaced African animals a better life than the zoo, the B. Bryan Preserve also has a three-room inn. You can take a guided tour or stay the night, like we do, to wander on your own (130 Riverside Dr., bbryanpreserve.com, from $135, including a 1.5-hour walking tour of the park). That evening, we have our pick of tables on the deck at the Pier Chowder House & Tap Room, where we eat fish tacos made with cod caught off the very pier we're gazing at.

In Mendocino, we stop for an early lunch of chicken focaccia sandwiches in the garden at Moosse Café, which is filled with elderly women with wide-brimmed hats and lap puppies (90 Kasten St., 707/937-4323, chicken focaccia $13) . It comes as a surprise, then, when we get to Fort Bragg's Piaci Pub & Pizzeria, 20 minutes north, and discover a different world entirely (120 W. Redwood Ave., Fort Bragg, 707/961-1133, pies from $9.25). Scruffy, friendly locals squeeze into overstuffed booths—not a designer dog in sight. A teacher sitting near us puts it best: "Mendocino is for celebrities and older second-home owners—the Murder, She Wrote crowd," he says, referring to the Angela Lansbury TV show partly filmed in Mendocino.

Home to monster trucks and mattress stores, Fort Bragg isn't exactly the land of flowery B&Bs. But on the street-lamp-lined side streets, there is a thriving small-town scene with live-music cafes, chic boutiques, an outstanding greasy spoon (Eggheads, inexplicably decked out in all things Wizard of Oz), and a trio of indie bookstores (326 N. Main St., 707/964-5005, Dungeness crab omelet $16).

But it's the easy access to the pristine, rugged coast that's the main draw for visitors, namely MacKerricher State Park, just outside of town. We arrive in the afternoon to a nearly empty stretch of sand, with waves raging every which way. The only other visitors are a family of sea lions sunning themselves and a few folks on horseback. Nearby, our room at the Beachcomber Motel is basic but squeaky clean, with front-row views of the Pacific (1111 N. Main St., thebeachcombermotel.com, from $99). Stuffed with pesto-spinach pizza from Piaci, we pick up the three-mile paved path right outside our room's sliding-glass door. We detour into the bluff through a carpet of long grasses, and the wind is fierce and salty. No wonder the cypress trees permanently lean in a horizontal slant. White caps crash against the rocks below. The sun slips into the horizon, and a man taking photographs turns into a silhouette. And we otherwise have the coast all to ourselves. Again.

How Well Do You Know Your City Skylines?

8 Most Complicated Countries to Visit