So it's April 29th, and you're all invited: H.R.H. Prince William is making his marriage to Catherine Middleton into a "People's Royal Wedding." In the works are a parade, street parties, and a military fly-over. Soon, tickets will go on sale for a concert that weekend, starring Elton John and Susan Boyle.

A special national holiday (combined with a previously scheduled one on the following Monday) will create a four-day weekend for locals. Many Londoners plan to celebrate, dressing up in spiffy clothes and fancy hats.

There is political pressure on the Mayor to find budget money to put giant TVs in Hyde Park, which would broadcast the ceremonies. Local boroughs are certain to sponsor street parties, about 30 in every borough.

Book your travel now. Prices will only rise from here on out. One sample offer: British Airways is selling wedding-themed air-plus-hotel packages from $865, before taxes.

Can't make it April 29? Not to worry. Here's a guide to the top London attractions related to the royal wedding. Visit when you can.

See the Royal Carriage, the coach that the couple will most likely use on their wedding day. The queen's working horses are in the stable next door. £7.75 ($12), royalcollection.org.uk.

Garrard claims to be the world's oldest jewelry shop. It's the source of Princess Diana's sapphire and diamond engagement ring, which Prince William took out of his rucksack and presented to Kate during a getaway in Kenya. garrard.com.

After graduating from college, fashion maven Kate worked in the Kew branch of British boutique chain Jigsaw. You can check out her taste at the London branch at 126-7 New Bond Street. The store is a minimalist marvel, designed by renowned architect John Pawson 15 years ago. The fashion is relatively affordable for London. If you're looking to buy one "splash out" dress for the weekend's festivities, this is one place to shop for ideas and accessories. jigsaw-online.com.

One of Prince William's favorite hangouts, this nightclub is likely to be part of his stag party. mahiki.com.

Prince William currently lives near his Royal Air Force base in Wales, but his father, Prince Charles, lives at Clarence House.* Glimpse this Tudor building by walking up the Mall from Buckingham Palace to Admiralty Arch. Soldiers in sentry boxes guard out front. Book now for summer tours. royal.gov.uk.

*CORRECTED on Wed. Sorry for the error.

A new train connects Madrid and Valencia in 95 minutes

Spain's enviable, high-speed AVE train network is introducing a Madrid-Valencia route on December 19. The train, which speeds as fast as 205 mph, will cut the journey from three hours and 50 minutes to 95 minutes, while only raising the ticket price about $16&mdash;from $107 (&euro;78) to $123 (&euro;90), raileurope.com. (The current Alaris train will still be available at the cheaper price.) Even so, high-speed trains can't beat European low-cost carriers when it comes to pricing. Ryanair has a 55-minute flight available from Madrid to Valencia for $40 on December 19, according to Kayak. But consider whether you really want to subject yourself to Ryanair's no-frills service and notorious fees&mdash;and the added hassle of checking in and clearing airport security. For more comparison pricing of train and flight routes in Europe and Asia, check out The Fastest Trains on the Track. RELATED Madrid: 4 Easy Day Trips by Train 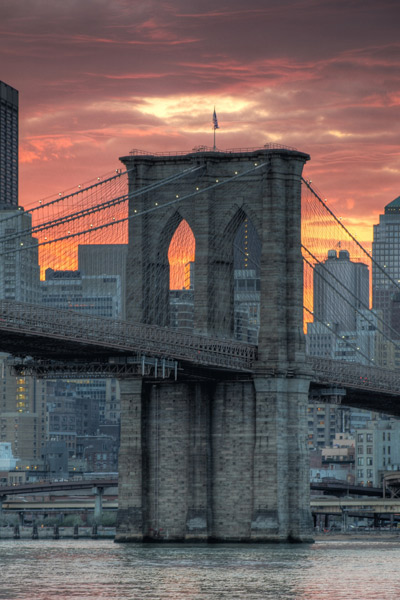 On your next NYC visit, are you Brooklyn-bound?

A few months ago, we asked if you'd sightsee in NYC, but sleep in Jersey City, just a river's train ride west of Manhattan. Your overwhelmingly positive responses got me thinking: Would BT readers be interested in not only staying overnight, but also spending their days outside of Manhattan? What about Brooklyn, a river east? As many creative types, the arts, and immigrant communities get further priced out of Manhattan, Brooklyn seems more and more like the go-to borough for a true-blue New York experience. A new book of photos and art, Brooklyn Diary: Walk, Shop, Home, and Studio ($32, Lines &amp; Shapes 2010), illustrates Brooklyn as the truly beautiful mishmash of cultures and personalities that it is, and provides the perfect pre-trip guide to what many consider to be New York's greatest borough. Curator Lena Corwin chose 21 Brooklyn-based artists to open up their homes and studios, and share their favorite shops, restaurants, and neighborhood spots through their own artwork and the collective lens(es) of 10 different photographers. Divided into five sections: Walk, Eat, Shop, Home, and Studio, Brooklyn Diary is an excellent guide to the lesser-known pearls of a less-frequented, but no-less-electrifying, borough. Of course, the book outlines the daily lives of those 21 artists in a very personal, neighborly way, but the greatest value for travelers are the places to shop and eat. Without further adieu, here are my favorites: Immediately east of the mid-to-lower section of Manhattan is the trendy neighborhood of Williamsburg, a straight shot from 14th St. across the river on the L train, or a quick, southern hook over the Williamsburg Bridge on the J or M. In this traditionally Hasidic, Italian, Hispanic, and African American neighborhood, you can sip coffee and watch hip 20-somethings stroll by at Verb Caf&eacute; (218 Bedford Ave.; Bedford L), take a private booth at the beautiful Japanese brasserie, Zenkichi (77 N. 6th St.; Bedford L), or browse the great collection of books (especially art books) at Spoonbill and Sugartown (218 Bedford Ave.; Bedford L), among other things. Also, nothing, and I mean nothing, beats a $5 chicken biscuit slathered in honey butter and hot sauce from Pies 'n' Thighs (166 S. 4th St.; Marcy J or Bedford L). Just north of Williamsburg is Greenpoint, a traditionally Polish enclave. I prefer the Pierogi platter at Lomzynianka Restauracja (646 Manhattan Ave.; Nassau G) and the fresh donuts at Peter Pan (727 Manhattan Ave.; Nassau G) simply for their unbelievably cheap, home-cooked goodness. And of course, no New York experience would be complete without pizza, right? Closer to where I live in Bushwick, there's a little hole in the wall called Roberta's (261 Moore St.; Morgan L), which serves up some of the tastiest slices in the city, complete with fresh, artisanal ingredients and unusual toppings. If you're willing to go down to Carroll Gardens, try Lucali (575 Henry St.; Carroll F or G). Besides being the rumored favorite date spot of Beyonce and Jay-Z, it's quite possibly the freshest pizza I've ever had. Toppings are brought in and vary by day, and it's BYOB, so take your own bottle of wine&mdash;from the jumbled, bulbous neighborhoods bursting with swagger to the independent galleries, shops, and shows, it's all about doing it yourself, in Brooklyn.

Nothing inspires a beach escape quite like a dreamy photo. These 25 sun-drenched images show off the variety and appeal of destinations like Cozumel, Vieques, and even Cuba, and are guaranteed to get you thinking about your next sand-and-sea getaway. See the slide show. RECENT READER SLIDE SHOWS Skylines | Mexico | Wildlife | Australia STILL IN SEARCH OF... We're collecting your photos of Japan. Upload them through myBudgetTravel, tag them, and check back in the coming weeks for a slide show of the best submissions.

The next Trip Coach topic is a biggie&mdash;big in terms of complications and expense, and big in terms of an amazing experience like none other. On a trip as epic as an African safari, you really want to get all the details right. And to do that, you need to be well-informed about every part of the experience, from booking your trip to tipping your guides and everything in between. With that in mind, please send us all of your safari-related questions, and we'll answer the best, most pertinent and pressing ones in an upcoming Trip Coach column. You might be wondering about topics such as: Which are the easiest safari destinations to reach? How about the best overall spots to go on safari? Which destinations offer the most scenery and animal sightings for the money? Are tour packages the way to go? If so, what are the best options? Is a DIY safari even possible? If so, how does one even get started? How much should one expect to pay, and are there any good strategies for saving money? What are the pros and cons of various lodging options in Africa's national parks and reserves? What should one expect in terms of shots, paperwork, and other prep work in advance of a safari? What are the big mistakes commonly made by first-timers that I should be sure to avoid? Now it's your turn: Voice your concerns and ask whatever questions you have regarding safaris. (To get in the safari frame of mind, it might help to browse some of BT's safari stories in the links below.) We'll do our best to provide answers and guide you every step of the way in an upcoming issue of Budget Travel. MORE FROM BUDGET TRAVEL Dream Trips: Take an Affordable African Safari The No-Frills African Safari 10 Questions: Get the Most Out of Your African Safari