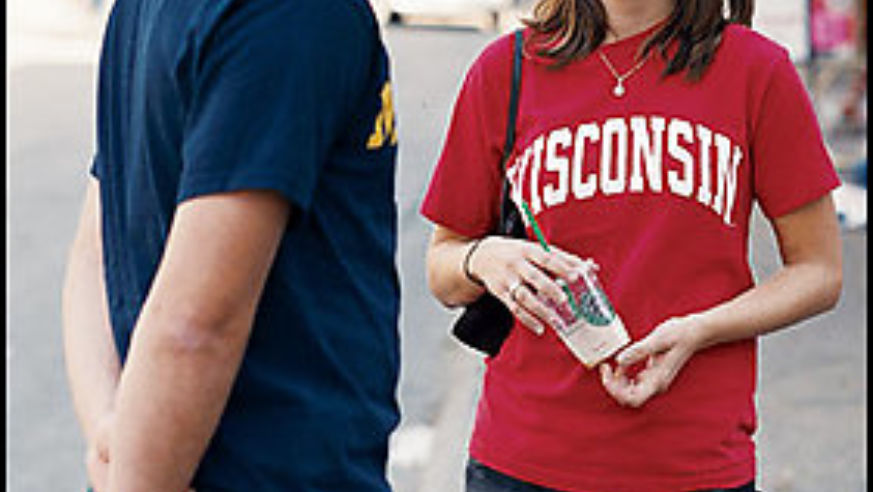 Wandering into the scene, you get the idea this is the way life should be: neighborly hellos, generous samples, farmers rubbing elbows with academics, and people pedaling home with purchases in their bicycle baskets.

Around every corner are more signs of Madison's friendly, small-town atmosphere. Small groups picnic on the lawn of the capitol building. Bike racks are everywhere, and folks use them. (Rent a bike at Machinery Row Bicycles.) Stroll underneath the enormous red marquee of the Orpheum Theatre for popcorn in red-striped boxes straight out of the 1950s.

Yet Wisconsin's state capital also has its cosmopolitan side. When the Orpheum isn't hosting live bands like Death Cab for Cutie, it screens independent films. After shows, patrons linger in the lobby--with its sweeping split staircase and intricate moldings--which doubles as a moderately priced restaurant. Locals consistently fill tables at Bandung Restaurant, in a strip mall just east of downtown, for Indonesian dishes like the nasi rames sampler, with portions of spicy beef tenderloin, homemade tempeh, and marinated vegetables in a curry sauce. The Chazen Museum of Art hosts free, continually changing exhibits, such as an upcoming one on 20th-century American painting, featuring works by Georgia O'Keeffe and Guy Carleton Wiggins.

Inevitably, everyone winds up poking around the bars, boutiques, and restaurants of State Street, which connects the capitol and the gorgeous lakeside University of Wisconsin campus. Chocolate Shoppe makes ice cream that's nearly sinful, with flavors such as Fat Elvis (banana ice cream with peanut butter and chocolate chunks) and Gaelic Delight (vanilla swirled with crème de menthe). The House of Wisconsin Cheese sells squeaky, rubbery, tasty cheese curds by the pound, and goofing off with its dorky Cheesehead apparel (bowties, sombreros) is difficult to resist. Stop by State Street Brats for a red brat--a Wisconsin-specialty sausage that uses smoked beef instead of the traditional pork. While you eat, take in a Wisconsin Badgers football game on one of the 25 televisions. Last year, Sports Illustrated ranked State Street Brats the 13th best sports bar in the country.

Even though most of the 28,000 undergraduates leave during the summer, Madison is a party town for all seasons. Lederhosen-bedecked staff at Essen Haus, just next door to the Hotel Ruby Marie, serve 17 German drafts in giant glass boots, while a polka band oom-pah-pahs joyfully. High Noon Saloon hosts bluegrass musicians and hip-hop artists alike, as well as an indoor craft fair where you can browse locals' works while enjoying a pint of New Glarus Spotted Cow ale.

Head to the university's Memorial Union Terrace, overlooking serene Lake Mendota, and just hang out if you want the most Madison-esque of all experiences. Sunbathe at water's edge during the day, or share a pitcher of beer and boogie to free live music by night. At one reggae show last summer, students bobbed near the stage, while couples and groups of friends clustered at tables, and grinning parents hoisted equally happy kids onto their shoulders. Like so much of Madison, the Terrace scene manages to be cool and wholesome in the same breath.