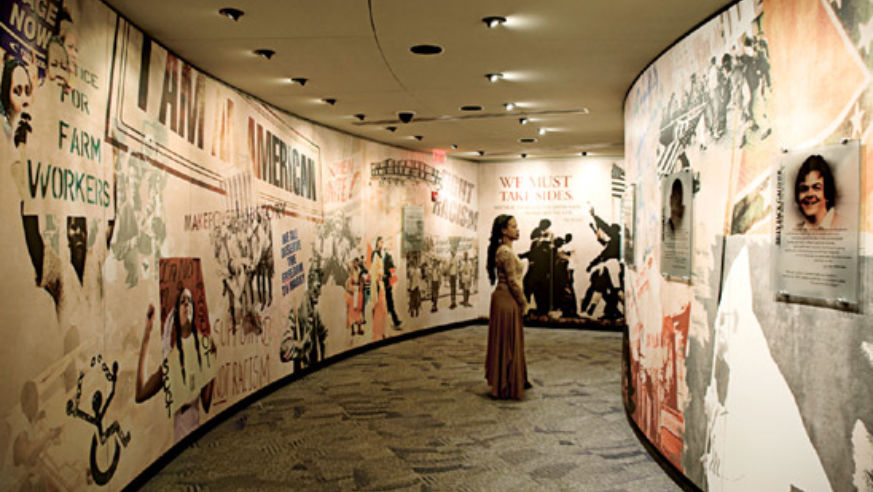 The Civil Rights Memorial Center, in Montgomery, Alabama, is one of several sites across the American South where travelers can celebrate the birthday of Martin Luther King Jr.

These travel destinations are steeped in the history of the civil rights movement.

You can celebrate Martin Luther King Jr.’s towering achievements by doing one of your favorite things: traveling. A variety of sites operated by the National Parks Service and nonprofit organizations offer the opportunity to enjoy your MLK weekend (January 19, 20, and 21, 2019) by immersing yourself in the history of the civil rights movement in vibrant communities across the American South. Add these to your all-American must-see list.

The National Memorial for Peace and Justice, in Montgomery, Alabama, is drawing visitors from all over the world, becoming one of the most essential destinations for travelers interested in educating themselves about the Civil Right Movement. The city of Montgomery is packed with historic sites and museums dedicated to the movement. At 252 Montgomery Street, you can see the exact spot where civil rights activist Rosa Parks refused to give up her bus seat to a white man on December 1, 1955. Her subsequent arrest triggered the Montgomery Bus Boycott, in which Dr. King played a leading role. Today, 252 Montgomery Street is home to Troy University’s Rosa Parks Library and Museum (troy.edu/rosaparks). The Southern Poverty Law Center’s Civil Rights Memorial, designed by Maya Lin (best known for the Vietnam Veterans Memorial in D.C.), is a black granite table and wall engraved with the history of the civil rights movement and the names of its martyrs, along with one of Dr. King’s favorite biblical paraphrases, “We will not be satisfied until justice rolls down like waters and righteousness like a mighty stream.” An adjacent Civil Rights Memorial Center (splcenter.org/civil-rights-memorial) educates visitors on the history of the bus boycott and the larger movement. For visitors hungry for more civil rights-era historical sites, the center is a short walk from Dexter Avenue King Memorial Baptist Church (where King served as pastor at the time of the bus boycott), the Alabama State Capitol, and the Alabama Department of Archives and History.

The National Civil Rights Museum at the Lorraine Motel (civilrightsmuseum.org) is one of the most extraordinary examples of hope rising out of pain. Built on the site of Dr. King’s 1968 assassination, the museum traces the history of the civil rights movement from its roots in the colonial slave trade to the present day.

The Martin Luther King Jr. Memorial on the National Mall, dedicated in 2011, the 48th anniversary of the March on Washington and King’s “I Have a Dream” speech, has joined the Lincoln Memorial, where King delivered his speech to an estimated audience of 250,000 demonstrators, and the Vietnam Veterans Memorial as a place where visitors are often moved and inspired beyond their expectations. The National Museum of African American History and Culture (nmaahc.si.educ), which opened in September 2016, is a gorgeously designed, immersive educational experience that belongs on any traveler's list of D.C. essentials.

The Martin Luther King Jr. National Historic Site (nps.gov/malu) includes the house in which Dr. King was born, a visitors’ center, an International Peace Rose Garden, and the nearby Ebenezer Baptist Church, where King was baptized and served as a minister, along with his father, from 1960 until his death in 1968.