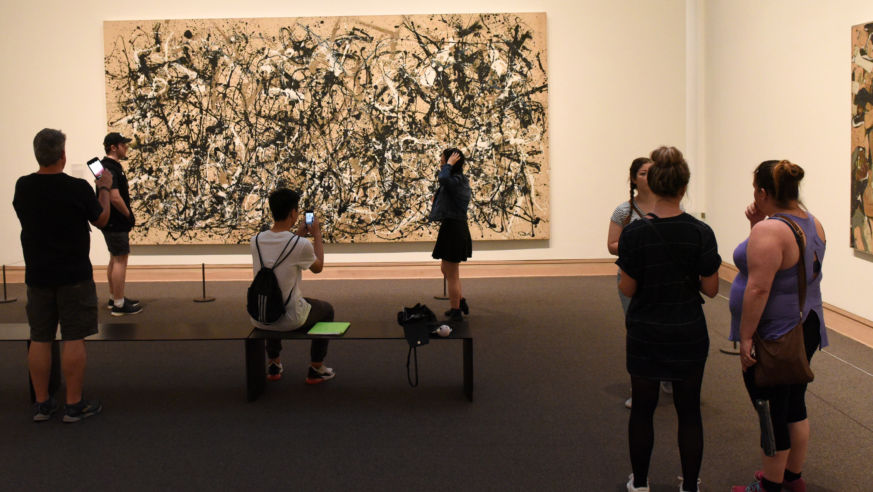 "My kid could do that," is a common refrain in the gallery where Jackson Pollock's "Autumn Rhythm" is displayed at the Met. To date, no child, or adult for that matter, has succeeded.

One of New York’s best-known museums is closed until October, but the Big Apple is still tops for groundbreaking visual art.

For art lovers who call New York City home or who visit frequently, the next few months are a good-news-bad-news situation.

The bad news: The Museum of Modern Art (MoMA) is closed until October 21 for a $450 million renovation. That means that Van Gogh's "The Starry Night," Mondrian's "Broadway Boogie Woogie," and other iconic works of modernism are out of reach for New Yorkers for the next three months.

But take a deep breath...

The good news: When MoMA reopens, it will display more of its stunning permanent collection than ever before thanks to an additional 40,000 square feet. More good news: The renovation coincides with an overhaul of the way MoMA tells the story of modern art, which promises to be more inclusive of groundbreaking artists of the past 150 years or so who did not happen to be male or of European descent.

A City of Galleries & Museums

And one more piece of good news for those craving a modern- or contemporary-art fix right now: Even with MoMA temporarily closed, New York City still boasts an unparalleled array of places to see impressionist, cubist, abstract, pop, conceptual, and every other conceivable variety of “modern” visual art that has happened or is happening.

Some of the world’s most successful galleries are either headquartered or represented in NYC. To see what’s cooking in the art world at this very minute, stop by: David Zwirner Gallery (537 W. 20th Street, davidzwirner.com), the Brant Foundation Art Study Center (421 E. 6th Street, brantfoundation.org), Gagosian Gallery (555 W. 24th Street, gagosian.com), or other galleries recommended by NYC & Company.

Here, to tide you over till MoMA reopens, NYC’s "other" major collections of modern and contemporary art.

The Metropolitan Museum of Art (1000 Fifth Avenue, metmuseum.org) houses New York City’s largest art collection, ranging from ancient artifacts from Egypt and Assyria to a wealth of important work from the late 19th century through the 20th and beyond, including the eye-popping experiments of Monet, Van Gogh, and Cezanne. Contemporary photography is a fixture here, as are the immense, colorful paintings of modernist Ellsworth Kelly, and Jackson Pollock's "Autumn Rhythm." The Met Breuer (945 Madison Avenue, metmuseum.org) is devoted entirely to modern and contemporary work, a great place to see the work of 20th-century masters and also of living artists.

The Solomon R. Guggenheim Museum (1071 Fifth Avenue, guggenheim.org) is as well-known for its unique spiral design, by iconic architect Frank Lloyd Wright, as for its great collection, much of it displayed along the winding, rising surface of the interior spiral. Don’t forget to look up at the incredible ceiling, and, through November 6, catch “'Defaced': The Untold Story,” about the remarkable work by Jean-Michel Basquiat.

The Whitney Museum of American Art (99 Gansevoort Street, whitney.org) boasts a wonderful collection of 20th- and 21st-century American art, and visitors to NYC this summer can catch “Spilling Over: Painting Color in the 1960s” through August 18 and the Whitney Biennial 2019 through September 22, spotlighting some of the most cutting-edge contemporary artists working today.