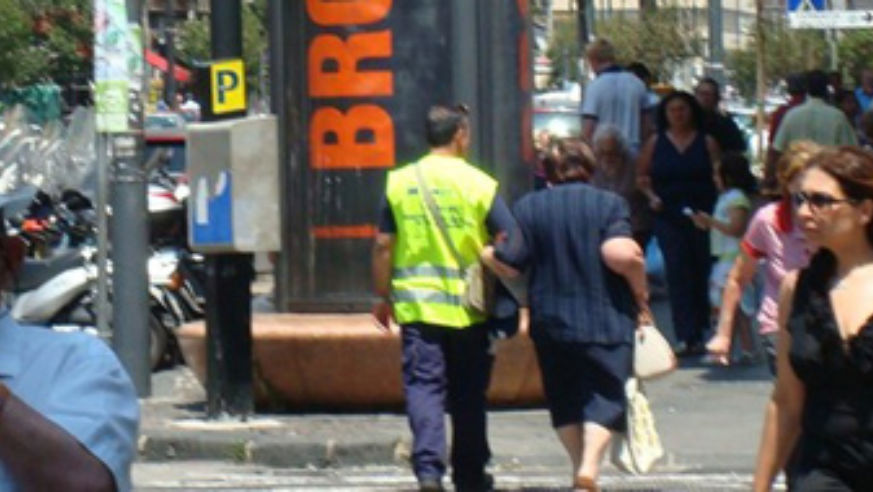 Courtesy Escodentro
A former criminal escorts a signora across the street

Gennaro Cesare grew up in a seedy part of Naples and spent years in and out of prison on drug-related charges. But for the past six months, the 36-year-old father of two has been wearing a different uniform—a neon yellow vest—as a participant in Escodentro. It's an experiment to rehabilitate petty criminals by employing them as guides stationed around Naples. (The €500 monthly salaries are funded by the region of Campania and the European Union.)

Tourists wandering near Porta Capuana, an ancient city gate, have turned to Gennaro for directions and recommendations—he's even accompanied people to nearby Pizzeria Trianon, his favorite.

One time there was a car accident in via Comunale, and, Salvatore, 47, called the police. Another time Salvatore intervened when someone's phone was being stolen. "If we see something abnormal, we say something to the police," he told me. "We use our street smarts."

It's a controversial but seemingly win-win idea: ex-cons use their knowledge of Naples's underworld to keep people safe, while getting a salary, a sense of pride in their city, and a reason to collaborate with a former nemesis, the police

At first the police put up a resistance, admitted Alessandro Maria Vecchione, head of an education agency that oversees Escodentro. But he told me there was an 80 percent decrease in crime between early June and mid-September—and that the remaining crimes tend to happen at night, when the guides are off duty. Tourists have written in thank-you letters and locals have circulated petitions to increase the guides' numbers and hours.

"It's as if someone gave a societal identity to these people," said Vecchione. "They know that this is a second chance." The question now is whether these ex-cons will get a third chance. The pilot program ends today, and it's up to regional and state officials to decide whether to restart it.

Social worker Riccio Gennaro, 45, himself a former prisoner, helps out the participants and said it would be a cruel hoax if the program wasn't extended. "Many of these guys are from the neighborhood, so people know them and are glad that they've got jobs," he told me. "Those who made mistakes have paid for them; Naples has to change, and we'll be the ones to change it."