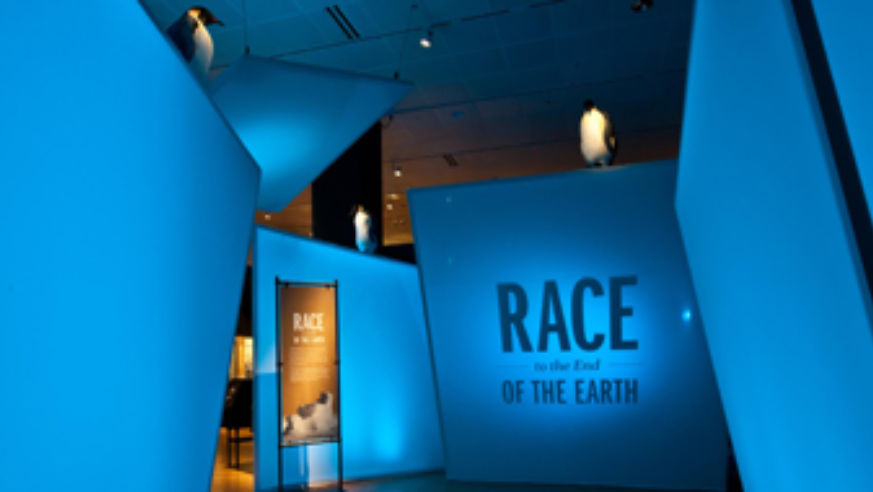 D. Finnin/Courtesy American Museum of Natural History
At the entrance to the exhibition, visitors enter an immersive soundscape simulating the icy, windswept landscape of Antarctica, complete with life-size penguins

Have you ever wondered how it felt to be the first explorer to set foot on the South Pole a century ago?

A new family-friendly exhibit at the American Museum of Natural History, "Race to the End of the Earth," re-creates the epic battle between two explorers in 1911-1912 to be the first to make it to the South Pole, complete with hands-on interactive elements and rare historical artifacts from the expeditions (museum admission $16 adults, $9 kids).

On display until January 2, 2011, the exhibit kicks off with a video introducing the two men, Norwegian Roald Amundsen and British Royal Navy Captain Robert Falcon Scott, and their missions, building suspense and ending with the question: Who will reach the South Pole first? As visitors exit that section, they receive a character card featuring a member of the British or Norwegian team and can look for clues about that person's experience throughout the rest of the exhibit. (I got the commander himself, Scott, who I learned was "intelligent, but sometimes short-tempered," and I was tasked with finding his goggles.)

The exhibit then takes you through the events leading up to the race, including what life was like in each team's base camp on Antarctica's Ross Ice Shelf as they waited out the winter before setting off on the 1,800-mile journey to the pole. (The camps were 400 miles apart, so neither team ever knew what the other was up to). Highlights include life-size re-creations of Scott's hut and of Amundsen's underground workrooms, accompanied by touch-screen virtual scrapbooks of photos and drawings by each team.

Then it gets down to business: A side-by-side comparison of the teams shows just how many dogs, people, sledges, etc., each set off with, and a timeline follows the trail of their challenging, historic journeys, culminating in which one planted its flag in the ground first. (I won't spoil the "surprise" by revealing the victor, but a fun fact about the winning team was that when its members reached the pole and set up a tent to mark the spot, messages of congratulations fluttered from the seams of the tent—confident teammates who'd stayed behind at the camp had hidden the notes inside it months earlier.)

The exhibit closes with an interactive personality test to see if you're cut out for life on the continent. Sample question: "Winds of up to 185 mph have been clocked in Antarctica, and the sound is intense. Would this bother you?" Uh, yeah!

"Race to the End of the Earth" has appeal for adults and kids alike, reflected in a host of related special events the museum is offering. Adults can cool off from the summer heat during a night of "Polar Cocktails" inspired by Antarctic explorers, led by cocktail connoisseur David Wondrich and Momofuku Ssäm Bar mixologist Don Lee (Tuesday June 8, 6:30 p.m., $25 including tastings), while animal lovers of all ages can enjoy a wildlife program featuring live penguins with Jarod Miller, host of the TV show Animal Exploration with Jarod Miller (Saturday, July 10, 11 a.m.–noon and 1 p.m.–2 p.m., $12 adults, $10 kids).

Fun, free activity while you're in the neighborhood: Spend some time in Central Park, which borders the eastern side of the American Museum of Natural History. amnh.org.