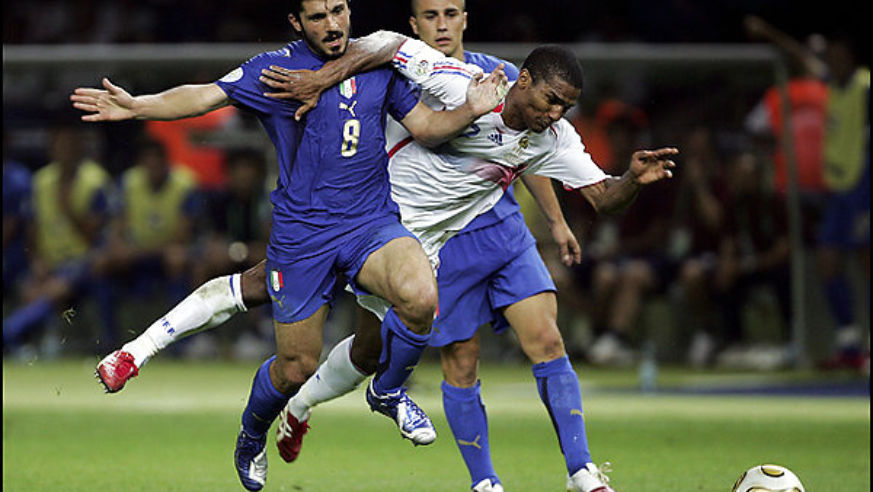 The best soccer teams on earth. One solid month of fleet-footed action in South Africa. Who wouldn't want to be among the paint-smeared fans?

There are sports fans, and then there are soccer fans. Every four years, when the best soccer teams on the planet go cleat-to-cleat in the World Cup, legions of their frenzied followers, decked out in wigs, wacky costumes, and clown makeup, turn the stands into a rollicking carnival.

"The atmosphere is absolutely electric," says Jim Doykos, a snowboarding instructor who traveled to Massachusetts and New Jersey for games when the World Cup was held stateside in 1994. "Everyone's singing and waving flags."

Doykos is no newbie to major sports events—he's been to the Super Bowl, the World Series, and the NBA Finals. "None of them," he says, "match the unbridled enthusiasm, the craziness that I experienced watching soccer."

When the 2010 World Cup kicks off in Johannesburg, it will be blazing uncharted territory: Never before has the tournament been held in Africa. Not surprisingly, South Africans are beyond thrilled to be hosting an estimated half- million visitors, particularly given the isolation the country suffered during apartheid. (South Africa was banned from the World Cup and the Olympics until 1992, after the white-minority government ended apartheid.)

After the tournament opens on June 11, 2010, the 32 teams play 48 round-robin games in nine cities—the locations are on the map at left. Then the competition moves into high-stakes mode: The top 16 teams meet in single-elimination matches, followed by the quarterfinals and semifinals. The final will be held on July 11 in Johannesburg in front of an expected crowd of 90,000—and a worldwide television audience of nearly a billion.

Of course, you can't join the painted bodies in the stands without a ticket, and obtaining one is not quite as simple as going to Ticketmaster's website. Because of the tremendous demand, as well as concerns about counterfeiting, FIFA (Fédération Internationale de Football Association, the organization that runs the World Cup) is selling tickets in several phases on its website, fifa.com. The first session started February 20 and runs to the end of March; subsequent sale dates had yet to be announced at press time.

To order, submit your name, passport number, e-mail address, and the matches you hope to see. Some tickets will be sold on a first-come, first-serve basis; the rest will be doled out through a lottery, and FIFA will notify the winners by e-mail at the end of each sale. If you're lucky, you then pay online, and the various venues in South Africa will hold your tickets until the matches. If your name doesn't come up, you can keep trying in future lotteries—and hope that the soccer gods are on your side.

As in all stadium sports, tickets are priced according to desirability. Category 1 and 2 seats, the most expensive at $120 to $160 apiece for the round-robin games, are on the sidelines, where the views are best. Category 3 tickets are behind the goals, a slightly less advantageous place to sit, but close to the field. These are the cheapest passes available to foreigners, running from $80 for the opening round up to $400 for the final game. Only South Africans can buy Category 4 tickets, high in the rafters, starting at a bargain rate of $20.

Since most fans traveling all the way to South Africa will want to take in more than one game, FIFA also sells special follow-your-team packages, which include tickets to three opening-round matches and guaranteed admission to at least one elimination game. You don't save by buying the package; the incentive is the certainty of getting a ticket to a later-round match.

But the soccer is only part of the experience—the celebrations always carry on into the night. When South Korea upset Spain at home in the 2002 quarterfinals, American Andrew Ullman says he danced in drum circles in the streets and threw back shots of soju until the sun rose. "It felt like I had landed at the biggest party in the world," he says.

Brazil
The most celebrated squad in the world: Brazil has won five World Cups—the most of any country—and is home to legendary Pelé and current superstar Ronaldo.

Italy
Led by talented players like Andrea Pirlo, Gennaro Gattuso, and Daniele De Rossi, Italy surprised many by taking the 2006 World Cup championship, its first title in more than 20 years.

France
Hovering at the top of the soccer rankings for the past decade, France captured the World Cup in 1998, courtesy of its famous midfielder, Zinedine Zidane. The team finished second to Italy in 2006.

GETTING THERE Book airfare as early as possible; prices will rise as the tournament nears. Buses are the cheapest way to travel between cities—you can buy tickets online from Greyhound (greyhound.co.za). Watch your valuables on metropolitan buses and commuter trains; licensed taxis are inexpensive and a safer option.

WHAT TO PACK Much of South Africa is at a high altitude, so don't forget to bring sunblock, sunglasses, and a hat. Face paint, rainbow wigs, and noisemakers optional.

TOUR OPERATORS FIFA is allowing a few officially sanctioned travel companies to sell World Cup packages that include airfare, hotels, and tickets to games. It will announce a list of vendors at fifa.com in the coming months.

SOUVENIR A vuvuzela, a three-foot-long plastic horn that South African soccer fans like to toot ceaselessly during games. It sounds like a foghorn, or, when blown in concert with thousands of others, a stampede of elephants.

WHERE TO SAVE The next best thing to being at the games is joining the locals watching them for free at South Africa's public squares where giant screens will be set up. Or head to a pub for $1 Castle Lagers and a whole lot of hooting.