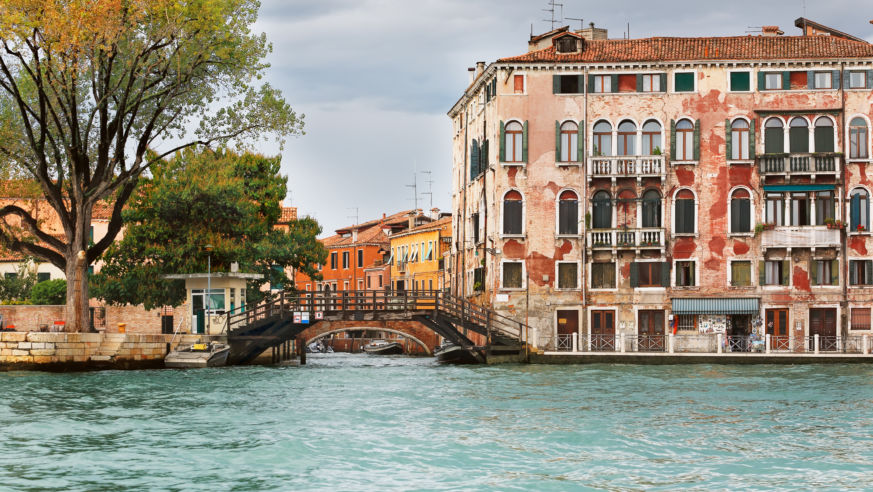 A classic travel mistake is to stick to the beaten path. When in, say, Venice, sneak away from the popular squares and get lost—among unforgettable neighborhoods most Americans never set foot in.

Even the dreamiest of trips can go off the rails when you fall into one of these all-too-common travel traps. We've been there—and we've brought back advice on foolproof booking, smart sightseeing, and making the most of every minute.

Even the most meticulously planned trip is subject to snafus, but with a little insider know-how, you can avoid making the common mistakes that can derail a vacation. Stick to the guidelines below, and you're more likely to have a trip that's memorable not for lost luggage and rushed sightseeing, but for the thrill of discovering a new place and savoring it.

Leaving a window of at least an hour and a half between connecting flights will significantly drop your chances of missing your flight or having your luggage lost, says Sally Watkins, travel agent at Century Travel and Cruises in Austin, Texas. Having only 45 minutes to connect between flights might seem doable—not to mention the siren call of less lag time spent hanging out at a dismal food court—but it's often not enough, especially in large airports where the gates could be far apart. Don't rely on airlines to do the math for you, either: "Flights can't be booked unless it is a legitimate change time according to that airport, and usually if it's the minimum change time and airlines let you book that, they will make it work," Watkins says.

Routine passport processing takes about four to six weeks, so as soon as you start planning for your trip, apply for a passport if you need one, or make sure the one you already have hasn't expired. Plus, in certain countries you need at least six months' worth of validity remaining to enter, says Elizabeth Finan, spokesperson for the State Department's Bureau of Consular Affairs. (Go to travel.state.gov for more information.) If your trip is coming up quicker than that, you can shell out $60 to cut the processing time to two to three weeks, but if you're planning to board a plane in less than two weeks, make an appointment at your local passport agency by calling 877/487-2778. The $60 fee still applies. If you've traveled so much you've practically worn out your passport, flip through it as a precaution: "Frequent travelers should make sure that they have enough pages in their passports," says Finan. "For example, South African law requires travelers to have one fully blank visa page in the passport; without the requisite number of pages, you may be refused entry." No one wants that.

When you're visiting a city, ponying up for a more expensive hotel that's in the middle of the action can be a better financial decision in the long run than staying out in the suburbs and spending money and time on transportation. Use time you save to explore—or just recharge in your hotel room. "Particularly if it's a European city in the month of July and it's hot… you're going to want to go back in the late afternoon and put your feet up before you go to dinner," Watkins says. "That's not easy to do if your hotel is a 30-minute bus ride away." Plus, if it's a family vacation, toting kids on unfamiliar trains or taxis with few breaks will increase the possibility that you'll have a frustrating visit. "Value is more important than what's the cheapest," Watkins says.

Allot a minimum of three days for visiting major cities like Rome, London, and Paris, and you'll end up with a richer vacation that includes time for simple pleasures like people-watching or relaxing in sidewalk cafés, says Watkins. "A lot of people say, 'I just want to do just one night in whatever and one night in so-and-so.' Slow down! By the time you either load all the bags into the car, drive, and park, or you schlep all the bags onto a train, you don't have that much of a day left," says Watkins. The same goes for multiple activities. Make time for wandering around. In Rome, for example, planning to see the Vatican Museums, the Colosseum, and the Forum in the same day is overkill, Watkins says. Really seeing the city via strolls and serendipity can be invaluable.

There's no shame in wanting to leisurely sit in cafés in Paris instead of hoofing it to every monument—or preferring to check out Mayan ruins in Tulum instead of lying in a hammock. Before you plan vacation activities that others insist you'll enjoy, sit down and think hard about what you want your trip to be, then follow your own itinerary. "Many people plan the trip they think they ought to want, rather than the trip they actually want," says Edward Hasbrouck, author of The Practical Nomad: How to Travel Around the World. "If you rarely set foot in a museum, why plan a trip with museum after museum? A lack of self-awareness can lead to, among other things, relying on recommendations from people with very different tastes." Your trip, your experience.

It can be tempting to sink into a chair in the first restaurant or bar you see, but a little research can net you a more authentic experience. To locate the best haunts before you go, seek out "blogs that are focused on just restaurants, or just shopping in a given city," says Parker Stanberry, founder and CEO of OasisCollections.com, which offers high-end vacation rentals and private members' clubs in South America. "And in the social media age, certainly trying to find a friend of a friend that is a local and can provide that local insight is worth the effort. There is no substitute for that local, on-the-ground perspective." Here's how to spot a "tourist trap" so you can steer clear: "With some exceptions, hotel restaurants and bars fall into that category, as well as those suggestions that you see in every generic guidebook," Stanberry says. "Also, spots right next to major tourist attractions—the main plaza, the top shopping street, major museums—tend to fall into the 'overpriced and not very local' category."

Any hotel or resort can use a fish-eye lens and carefully selected photos to make their property look desirable. Viewing unaltered third-party pictures on sites like TripAdvisor.com and Oyster.com can give you real-life insight into the look of the place—and help you avoid the rude awakening that happens when expectation collides with reality. Oyster's "Photo Fakeout" series mashes up touched-up promotional photos with what the property actually looks like, with funny and slightly depressing results. "Although there's a lot of debate regarding the authenticity of guests' testimonies on TripAdvisor, the website does allow travelers the opportunity to glance at tourist-taken photos," says travel expert Brandon Presser, author of books including the Lonely Planet guides to Iceland, New York City, and the Caribbean. "It's a good opportunity to get a sense of what 'ocean view' truly means at the resort in question. Also, nothing's stopping you from sending the hotel an email, or picking up the phone to further ask about what to expect upon arrival. Remember, hotels are part of a service industry—an industry meant to serve you, the traveler."

Establishing trust is crucial when you'd like to book a stay in someone else's home instead of a hotel, so asking the host to repeat themselves doesn't win you many brownie points. If the host feels comfortable with you, the more likely you are to score the rental you want. "If you start asking questions that are clearly stated in the profile, the host will think, 'If they aren't minding the details in the listing, are they going to be mindful in taking care of my home?'" says Emily Joffrion, director of consumer strategy at Airbnb.com. To show genuine interest, if the host mentions in the listing that she has a cat, for example, indicate in your initial message that you love cats. Reading carefully can also skyrocket you to the top of a choice apartment's rental list if they're screening out less conscientious guests. Joffrion says one of her New York-based superhosts puts tricks in the description. For example, "If you've read this, open your message by mentioning the color blue."

Flying into a nearby city or out-of-the-way airport to save money up front might seem smart, but, in the end, the cost could even out and also leave you with less time to spend in your destination. In New York City, for example, taxi fares run from $50 to $70 from Newark Liberty International Airport in New Jersey to Manhattan. Fares from LaGuardia Airport, which is closer to Manhattan, range from $29 to $37. Add those expenses up each way, and you're looking at almost $70 more spent on transportation, plus the additional transit time. Same goes for the teensy airports that surround the city you're visiting. "Flights at smaller airports tend to have weaker transportation infrastructure to your chosen destination," Presser says. "You might be faced with cost-prohibitive taxi rides upon arrival." The luggage fees at smaller airports can also be outrageous, Watkins says. Unless your airline ticket is significantly cheaper and the extra fees are low or nonexistent, you might be better off choosing one of the usual airports.

When you're staying at a resort that offers timeshare pitches, know that your time—and your sanity—is more valuable than a spa or restaurant voucher. Skip the sales brunch if you have no interest in purchasing a vacation share. "They can be a very hard sell and pursue you during the rest of your stay with calls," says Watkins. The time you save will allow you to spend more time with the people you're vacationing with and avoid constant unwanted interruption. If you have visions of free hot stone massages dancing in your head that cannot be ignored, hold firm to your bottom line, try to extricate yourself as soon as you can, and screen your hotel-room calls before picking up the phone. There is, as they say, no such thing as a free lunch. And when you're on vacation, pressure is the last thing you need.