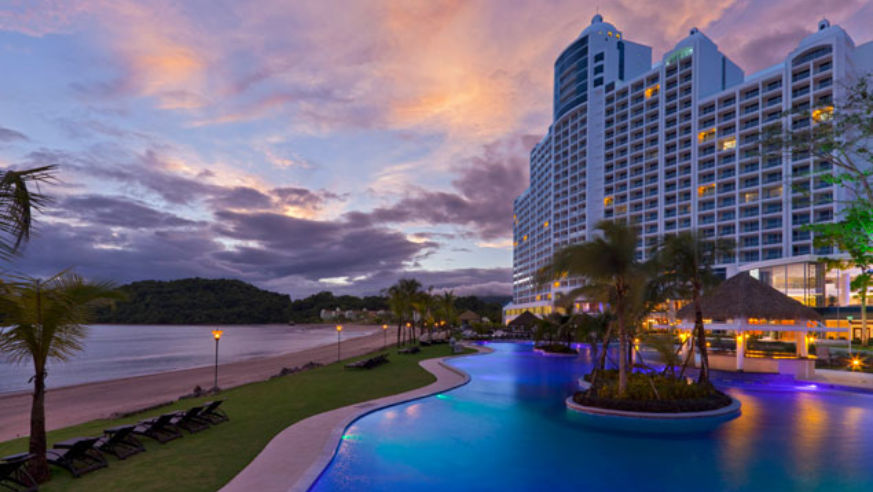 Make a splash on your next vacation with a stay at one of these 11 hotels, each with a pool so amazing you may make it your room.

Have you ever booked a hotel that advertises a "pool," only to find out that it's no more than an over-chlorinated square in the basement? Consider these 11 water-inspired masterpieces the cure for the common pool.  You can swim in all them, but getting wet takes a back seat to soaking in the jaw-dropping scenery. We explored properties from the valleys of Hawaii to the cliffs of Thailand to find the newest, most visually stunning pools-in some of the most evocative places on the planet. And with prices starting at $69 a night, there's no excuse not to check them out. Just don't forget to pack your bathing suit.

Aruba Marriott Resort & Stellaris Casino, Aruba
Where adults go to play
At family-friendly resorts, having a grown-ups-only section is a boon, which is why in November 2011, this Aruba Marriott unveiled the H2Oasis, a swimming pool and lounge section specifically for over 18s. The sparkling glass-mosaic tiled pool is surrounded by a 10,000-square-foot terrace and nine wooden cabanas that offer privacy (plus free WiFi, ceiling fans, magazines, and loungers) and respite from the powerful Aruban sun. Plus, the waitstaff dole out loaner iPads and free, rum-infused SnoCones, a reminder that this is definitely not the kiddie pool. 101 L.G. Smith Blvd., Palm Beach, Aruba, 800/223-6388, marriott.com. Double rooms from $189 per night.

Gansevoort Park Avenue, New York City
Gotham's hottest place to cool down
This indoor/outdoor heated pool measures 40 feet long, but it's only four feet deep. This isn't a pool for swimming laps or diving in. It's more for floating on your back and taking in the view of the towering skyscrapers around the hotel, plus the Empire State Building just a few blocks away. Don't forget to look down—there is an intricate mosaic on the pool floor of a 1940s pinup. 420 Park Ave., New York, New York, 212/317-2900, gansevoortpark.com. Double rooms from $325 per night.

Tierra Patagonia Hotel & Spa, Chile
Natural wonders on display
The indoor heated pool at this all-inclusive Patagonia resort opened in December 2011, and was made for the region's constantly changing weather. The interiors mimic the outdoors, with a curved wood ceiling and floor-to-ceiling windows that keep the cold out while letting the sunlight in. With only 42 rooms, there won't be a lot of competition for a prime spot in the pool to see one of the most photographed areas of the region—the sparkling Lake Sarmiento in the spring and the snow-capped peaks of Torres del Paine National Park in the winter. Torres del Paine National Park, Southern Patagonia, 800/829-5325, tierrapatagonia.com. Double rooms from $2,100 per person for a three-night stay, including all meals, drinks, transfers, and some excursions.

Aulani, Ko Olina, Oahu
Seven acres to get wet and wild
Disney's newest resort, about an hour from Waikiki, is right on a beautiful Hawaiian beach. But that doesn't mean the pools are an afterthought. The largest is the 8,200-square-foot Waikolohe Pool, part of the seven-acre Waikolohe Valley water park that is the centerpiece of the mega resort. Set against a backdrop of palm trees and lounge chairs, the pool is made for wading and floating, and if you are looking for excitement there's the Volcanic Vertical, a tunnel slide that zooms you through a (fake) volcano in the pitch black. The zero-entry pool really shines at night with in-ground lights shaped like Hawaiian constellations. If that's not enough, the resort also has a tubing stream and a snorkeling pool with angel and butterfly fish. 92-1185 Ali'inui Dr., Kapolei, Hawaii, 714/520-7001, resorts.disney.go.com. Double rooms from $399 per night.

Best Western Kuta Beach, Kuta, Bali
Affordable hotel with a priceless view
Budget chains aren't usually on the top of the list for inspiring pools, but this Bali Best Western proves there's an exception to every rule. Opened in 2011, the high-rise hotel has a gorgeous rooftop infinity pool that's a great spot for a 360-degree view of the Indian Ocean and Kuta, a popular beach town. After watching surfers go to town on the ocean waves, guests can take in the sunset and get in a lap or two. In close competition with the stunning views are the hotel's rock-bottom rates, which begin at $69 per night. Jalan Benesari Pantai Kuta ID Bali, 800/780-7234, bwresortkuta.com. Double rooms from $69 per night.

The San Juan Water Beach Club, Puerto Rico
Small space with a rocking vibe
Revamped with a multimillion-dollar renovation, the popular rooftop pool at The Water Club has been renamed the Mist Rooftop Bar + Lounge, and is once again the place to be in San Juan. The pool itself is small, but the view of the sandy shores and lapping waves is big. Take advantage of the teak lounge chairs and sofas with plush white cushions and catch some rays from el sol. The scene heats up as the day goes on, with a DJ spinning reggaeton and rum flowing into the wee hours. 2 Tartak St., San Juan, Puerto Rico, 888/265-6699, waterbeachhotel.com. Double rooms from $239 per night.

The Marina Bay Sands, Singapore
Thrill-seeking from 656 feet up
The outdoor infinity swimming pool at this mega resort (which opened in 2010) is considered the world's largest. Located a staggering 656 feet above Singapore and 492 feet long (roughly three times Olympic-pool length), it's a thrill-seeker's delight. The pool not only spans three of the hotel's 55-story towers, but the Plexiglas sides give the stomach-churning illusion of no end point in sight. In addition to the adrenaline rush, the pool's location is visual mayhem, with awesome views of the city skyline. 10 Bayfront Ave., Singapore, 011-65/6688-8868, marinabaysands.com. Double rooms from $359 per night.

Thompson Toronto, Canada
Exclusive views you can't get anywhere else
This is the city's only rooftop lounge with an infinity pool and it's an exclusive hotspot—only hotel guests and members have access. It's a hot ticket, too, thanks to the views of Lake Ontario and the Toronto skyline (including the CN Tower, of course). If you dare, swim right up to the edge to see the city coming to life at sundown. Then sip a mojito with the well-heeled crowd lounging on the striped couches in the lounge. 550 Wellington St. West, Toronto, Ontario, 888/550-8368, thompsonhotels.com. Double rooms from $225.

Paresa Resort, Phuket, Thailand
Healing energy overlooking the Andaman Sea
The focus at this secluded resort high on a hillside is rejuvenation. The two main pools are crafted right into the face of the cliff overlooking the Andaman sea. The infinity pool is especially transfixing after dark, when it is lit with fiber optics that imitate the stars above. The other is the Energy Floatation Pool, said to have healing properties thanks to an eight-pound obelisk of rose quartz that hangs overhead. Some believe that the stone has calming and romance-enhancing energies, as well as recharging and vitalization qualities. Whether you buy into that or not, try to think of the last time you saw someone come out of a pool angry. 49 Moo 6, Layi-Nakalay Rd., Kamala, Phuket, Thailand, 011-66/76-302000, paresaresorts.com. Double rooms from $382 per night.

Westin Playa Bonita, Panama
Perfect location in a new hotspot
Panama's hotel scene is hot (5,000 hotel rooms have been in the works over the past couple of years), with lots of competition for prime beachfront locations and the most exciting amenities. The Westin Playa Bonita opened in January 2012 in an enviable spot—there is a rain forest on one side and the Pacific Ocean on the other. In terms of amenities, the hotel has three freshwater infinity pools steps from the sand. The swimming areas have loads of cabanas if you need privacy (but get there early—it's first come, first served). After you are done taking a dip, watch the ships lining up to enter the Panama Canal's Miraflores Locks. Km 6 Camnino a Veracruz, Panama City, Panama, 011-507/304-6600, starwoodhotels.com. Double rooms from $195 per night.

Revel Atlantic City, New Jersey
A glam new pool above the historic boardwalk
Atlantic City's Revel opened in May 2012 with 14 restaurants, a 13,000-square-foot casino, and a 20,000-plant rooftop garden. Oh, and 10 pools. The showstopper is the InOut pool—a large heated pool that starts inside and winds its way outdoors (if it's too chilly outside, the indoor section has floor-to-ceiling windows so you won't miss a thing going on outside). In the center is an island, where guests can see and be seen while taking in the view of the Atlantic Ocean. 500 Boardwalk, Atlantic City, New Jersey, 855/348-0500, revelresorts.com. Double rooms from $239 per night.