Take a look at how travel journalism began in Europe: It started with the spread of mass-produced maps, books, and images like the ones here in our online slide show.

The first European mass-printed travel map, the first secular illustrations of the New World, and other images shown in this slide show are from a collection of 60 original works on view at the National Gallery of Art in Washington, D.C., through mid-September, titled "Fabulous Journeys and Faraway Places: Travels on Paper, 1450-1700." 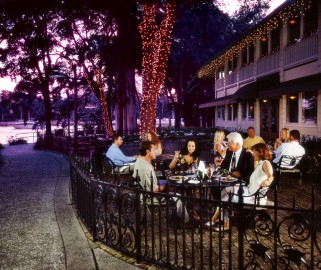 Dine Out in Fort Lauderdale

The Greater Fort Lauderdale Convention &amp; Visitors Bureau is running a promotion, Dine Out Lauderdale, during Oct. 1 to Nov. 15, with 35 restaurants offering three-course prix fixe dinner menus for $35. The restaurants are in Broward County, including Fort Lauderdale, Hollywood, Coral Springs, Pompano Beach, and other popular destinations. The participating restaurants include Cero at the St. Regis, Cohiba Brasserie (in Pembroke Pines), Himmarshee Bar &amp; Grille, Lola's on Harrison, and Mark's Las Olas. A complete list of participating restaurants is at sunny.org/dineout. The program is co-sponsored by American Express, but you do not need to use an AmEx card to pay for your meal. [via the Miami Herald, from an article not online] Related: Find BudgetTravel.com's latest Real Deals in Florida.

Godspeed to a traveler's hero

Clarke Bynum, who saved the lives of several hundred travelers back in 2000, died this week of cancer. Here's his inspiring story, which wasn't in the major newspapers this week: On December 29, 2000, then 39-years old Bynum, a former Clemson basketball star, caught British Airways's Flight 2069 from London's Gatwick Airport to Nairobi, Kenya. He had missed a direct flight to Uganda because of winter weather delays in London and was on the flight by happenstance. He was heading for a two-week Christian mission trip in Uganda, where he would be speaking to Sudanese refugees. During the flight, a young mentally ill passenger burst into the cockpit and attempted to seize control of the plane. The autopilot was disengaged, and the plane nosedived about 16,000 feet. Clarke heard screams coming from the cockpit. He ran forward. With the help of another passenger and the flight crew, he restrained the man. All 398 passengers were saved. Clarke is survived by his wife, Mary Lynn, and four children. Services are being held today in Sumter, S.C. He was 47. [Thanks for the reminder from Online Travel Review, Jared Blank's blog] 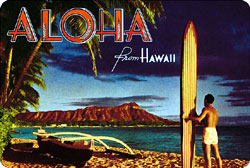 Who isn't tempted by the allure of the islands? The lush flowers, the droopy palm trees ripe with coconuts, the gentle waves lapping the shore&hellip;. Sure, it's a clich&eacute;d vision of Hawaii, but it's an effective (and largely deserved!) one. Travel companies have been milking it for decades, and Hawaii remains one of the top spots for honeymooners. While on my own honeymoon in Maui, I came across a package of postcards featuring vintage art from the early 20th century&mdash;the glory days of travel to Hawaii. This was a time when airlines and cruise lines were selling the glamour of travel to the Pacific by using some of the classic art imagery that had already been seen on "luxury" items like canned pineapples. Check out the slide show I've put together, showcasing a bunch of these iconic images of Hawaii. Related While we have you in the mood, read up on your favorite island, whether it's Kauai, Maui, Oahu or the Big Island. Earlier A slide show of photographs from the book Exotic Postcards: The Lure of Distant Lands [artwork courtesy of islandartstore.com] 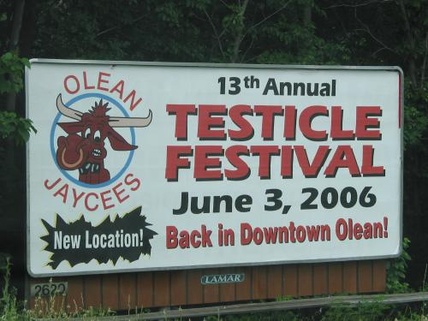 We received the following email from Judy McFarland of Columbia, Mo. Please let Kate Appleton know that she missed one Wacky Festival in Missouri, the Testicle Festival. I've attached a billboard picture from the festival, which happens in Olean, Mo. Duly noted, Judy. We clicked these photos on Flickr to learn more. But you may be heartened to know that Budget Travel mentioned the Testicle Festival in its recent Road Trip: Eastern Kansas. [Update: A reader has reported on a second testicle festival. See comments below.] You can see Judy's testicle festival photo... here: And here is Kate Appleton's terrific roundup of Wacky Festivals.