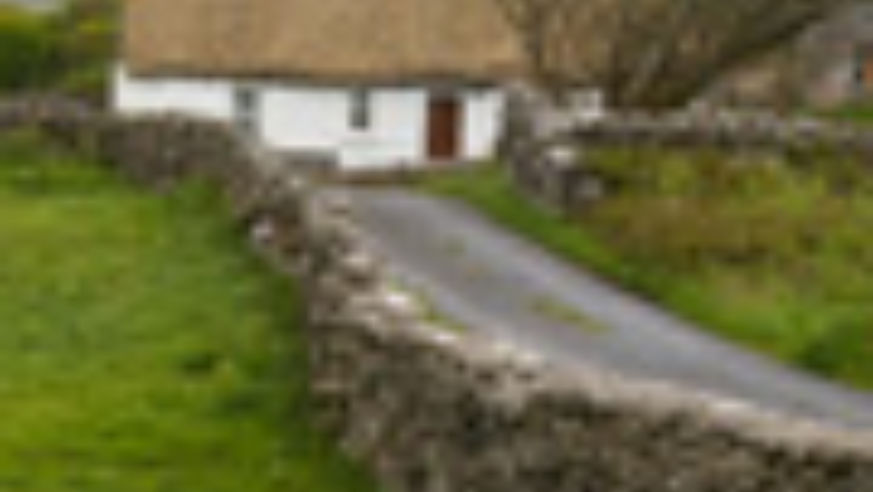 Here's a snapshot of Ireland's defining experiences: spectacular untamed landscapes, pubs reverberating with banjo and fiddle music, and monuments to past civilizations. Get a sense of which ones fit your travel style and budget.

SEEK OUT NATURE AT ITS WILDEST

For such a small island, Ireland is blessed with a wide variety of untamed landscapes. In a three-hour drive from Kerry to Connemara, for example, you pass from pristine white beach, through a craggy mountain pass, and on to lake land and silent bog. About halfway along the drive, near the village of Liscannor, the iconic Cliffs of Moher stand a thrilling 700 feet over the swelling Atlantic below. The visitors center offers daily guided tours along the cliff side. If you time your outing to a clear, windy day, you can see past the Aran Islands to the valleys and hills of Connemara and hear the waves heaving againstthe shale and sandstone cliffs ($8 per car).

Tide and weather will decide when you can get out to Skellig Michael, a proud rock rising 714 feet straight up from the sea off the Iveragh Peninsula in County Kerry; it's an hour-long, rough-water boat ride from Valentia Island. Make the dizzying climb up 650 small steps cut out of the rock faceto reach the summit and the remains of a spartan, early-Christian monastery built in the 7th century. The peninsula itself is home to the famed Ring of Kerry drive, as well as the Kerry Way walk, which winds for 125 miles through some of the most isolated and dramatic countryside in Europe.

The Maamturk Mountains in Galway are perfect for a short cycling tour, thanks to gentle climbs and exhilarating falls amid untouched lakes and rolling bogs. The climax of any ride is the windswept, freewheeling descent into the tiny hamlet of Leenane, located where the Atlantic Ocean juts 10 miles inland to form stunning Killary Harbour, Ireland's only fjord. Bike Hire Ireland in Galway City is the best place to rent a bike (from $8); it also organizes guided and self-guided tours. Farther north is Ireland's most isolated and untouched landscape, County Donegal, and Glenveagh National Park, where red deer roam and falcons coast over the moors and hills. This quiet park lends itself to a leisurely 1.25-mile hike along the Derrylahan Trail and the starkly beautiful five-mile Glen Walk through the Derryveagh Mountains, which yields spectacular views over Lough Veagh lake and the surrounding woodlands.

The isolated, Gaelic-speaking villages of the west coast and the sophisticated city of Dublin best epitomize Ireland's rich cultural heritage. Both prize music and words, with the treasured local pub as the gathering place. (A simple rule to find the best, traditional pubs: If it has a television, go elsewhere.)

In a wild and beautiful nowhere called the Renvyle Peninsula in County Galway, Paddy Coyne's Public House is a hot spot for authentic Irish music, set dancing, and old-school storytelling nights. The village of Clifden, about 12 miles south on a plateau overlooking the ocean, fiercely guards the local traditions of Celtic music. On long summer evenings, the sounds of flute, banjo, bodhrán (Irish hand drum), and fiddle waft from every bar along Main Street; mid-September brings the Clifden Arts Festival. A short boat ride ($34 roundtrip) will take you to the Aran Islands, where Irish is still spoken in dulcet tones as the day-to-day language. Make the extra effort to get to Inisheer, the smallest of the islands; this tiny patchwork of fields divided by stone walls is a vision of an older Ireland frozen in time. The Hotel Inisheer is famed for its wild, impromptu sessions of craic agus ceol, or music and merriment.

Each year on June 16, the day during which James Joyce's Ulysses unfolds, Dubliners dress up and follow in the footsteps of Joyce's everyman hero, Leopold Bloom. The James Joyce Centre ($7) is the hub of the festivities, but it's in the still-existing pubs mentioned in the book, like the stately Davy Byrnes on Duke Street, where you'll get a chance to sample some of that famed Dublin wit at the heart of Joyce's work. A DART trip along Dublin Bay will bring you to the picturesque seaside village of Sandycove and the Martello (a.k.a. Joyce) Tower where the book begins. The tower, which contains a little museum ($8) to Joyce's life, is next to the Forty Foot swimming hole, where generations of Dubliners have come for a bracing dive off the rocks. Back in central Dublin, the Abbey Theatre can rightly claim to be the treasure-house of Irish literary culture, from Yeats, through Synge and Beckett, up to the present day. After a show ($17–$51), follow the actors to a favorite nearby haunt, the Flowing Tide, for pints of draught Guinness (9 Lower Abbey St., $6). If you'd like some help wrapping your head around Dublin culture, the free Dublin Tourism iWalk tours are brilliant podcasts by the hugely entertaining author, historian, and artistPat Liddy. The Dublin Literary Pub Crawl, led by professional actors, takes in the city's more famous cultural bars, with some great music and storytelling thrown in ($16).

WONDER AT THE SITES OF PAST CIVILIZATIONS

Ireland's history is a series of invasions, and each wave brought newcomers eager to build monuments to the glory of their own civilization. The prehistoric wonder of Newgrange in County Meath, about 30 miles northwest of Dublin off the N2, makes a good starting point (from $4). Built in the 4th millennium B.C., 1,000 years before Stonehenge, this spectacular passage tomb (a narrow passage made of large stones with a covered burial chamber) was so carefully constructed that during the winter solstice, the rays of the rising sun still strike a small opening above the doorway and illuminate the sacred chamber within. The stunning lunar landscape of The Burren in County Clare held a strong mystical attraction for the ancient Irish, who left more than 80 Neolithic tombs, numerous portal dolmens (Stone Age tombs with giant stones making a doorway to a single burial chamber), a Celtic high cross in Kilfenora village, and more than 500 ring forts, including the one at Cahercommaun. Pick up a guide at the visitors center.

When early Christian monks came to Ireland, they sought out the most isolated and serene places to set up their monasteries. Glendalough was the choice of Saint Kevin, who lived as a hermit in a tiny cave in the rock face above a lake. Arrive in the early morning before the tourist onslaught to get a feel for the stillness and natural solitude that drew the monk to this scenic spot back in the 6th century. A hundred years before Kevin dreamed up Glendalough, Saint Declan founded his own monastic site in Ardmore, County Waterford. St. Declan's well stands on the site of the original monastery, and the ruins of the 12th-century Round Tower Cathedral contain ogham stones and strikingly modern,almost abstract-looking carvings of biblical scenes on the west gable.

Castles symbolize the power and ruthlessness of the Norman conquerors, who made their headquarters at Kilkenny City. With its battlements and arrow slits, imposing Kilkenny Castle, on 50 acres beside the River Nore, recalls the days of knights at arms and constantly warring dukes ($8). The largest Norman castle, built on the banks of the River Boyne near the town of Trim, has a huge keep with turrets flanked by impregnable towers. Trim Castle made such an impression on the makers of Braveheart that they chose it as a backdrop for their hit movie (from $4).

Ireland enjoyed something of an economic boom in the 18th century, and the local aristocrats asserted themselves by trying to outdo their English rivals in the extravagance of their stately homes. In 1722, famed Florentine architect Alessandro Galilei was brought in by the original owner to design Castletown House ($6), County Kildare, in the trendiest neoclassical fashion. Russborough House ($13) in Wicklow was built in 1741, thanks to a fortune the owner made from brewing beer. A mile-long, beech-lined avenue leads to the 700-foot-long façade of silver-gray Wicklow granite.

1. A glut of hotels were built during the Celtic Tiger years (mid-90s to 2007), so it pays to haggle when booking a room anywhere in Ireland. Set your budget and then phone places in a higher price range to try wrangling a great deal.

2. If you fly into Shannon Airport, a cruise on the underappreciated Shannon River is a serene and handy way to travel through the heart of Ireland. You can hire easy-to-handle cruising boats and choose your layover spots along the route; there's usually a good gathering of fellow boaters with whom to enjoy a pint.

3. Cork City and the surrounding countryside produce their own brands of stout (black, malted beer), which is slightly sweeter and lighter than Dublin's famous Guinness brand. When in Cork, impress the natives by ordering a Beamish or Murphy's.

4. Ireland is small and perfect for driving around. You'll discover the best sites and scenery by getting offtrack and exploring the many boreens ("little roads"). Road signs are generally in Irish and English, but around Dingle and Connemara, they may be in Irish only, so get a good map. Distances are in kilometers on the new green road signs, although a few old, white ones still display miles. Check to see if your credit card company covers damages to rental cars in Ireland; if not, avail yourself of the rental company's collision insurance.

5.Dooley Vacations, Sceptre Tours, and BMIT are among the companies that specialize in Ireland deals combining flights, a rental car, and vouchers good at more than 1,100 B&Bs in the Town and Country Homes Association. These packages let you change your itinerary as you go, selecting a different B&B every night, or settling in if you find one that suits your style.

6. Ireland is still not the easiest place for vegetarians, but a lot more options have appeared in the past few years. Cafe Paradiso in Cork is a groundbreaking vegetarian eatery that is inventive enough to keep even the carnivores coming back for more.

7. Galway City is Ireland's seafood capital, and locals swear McDonagh's makes the finest fish-and-chips in the known world; try the unusual option of chips with deep-fried mackerel that still hints of the nearby briny Atlantic Ocean ($11).

Tourists and Irish families jam the most popular sites in the summer high season, when daylight lasts until 10 p.m. or later. The shoulder seasons of September and May are two of the driest months and give you a chance to mingle with the locals in a more normal, day-to-day mode. The winter is often wet and cold, but there's a great vibe leading up to Christmas, and many cultural highlights are clustered in fall and winter.