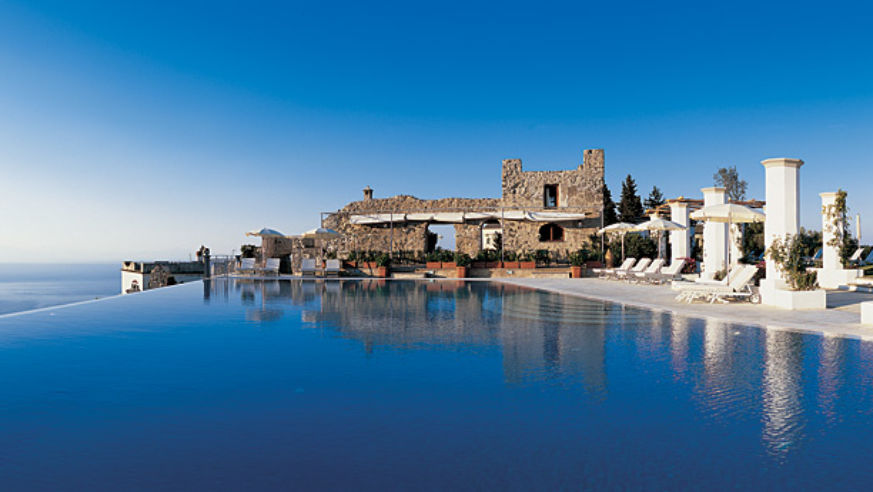 Swimming is almost beside the point at these 15 pools found at gorgeous, unexpected properties around the world.

Hotel: Hotel Chocolat, Soufrière, St. Lucia
Why It's Cool: The guest-only infinity pool at this five-month-old property is lined with black quartz tiles, a stroke of genius on the part of Hotel Chocolat’s upscale English chocolatier owners; the resulting dark color reflects the iconic Pitons and surrounding rain forest like an overflowing mirror. Ten lounge chairs line the poolside pine deck, pretty much assuring time by the pool for every guest of the 14 cottages and cabins. From your lounge, you can request poolside service of chocolaty treats, like a Bellini infused with fresh cacao pulp from the company's nearby groves.

SEE THE PLACES: THE WORLD'S MOST AMAZING HOTEL POOLS

Hotel: Four Seasons Resort Maui at Wailea, Hawaii
Why It's Cool: Spectacular pools are a dime a dozen in Wailea, the southwestern shore of Maui with prime beach real estate, known for glamorous resorts. So it's saying something that the Four Seasons has one that really stands out. The $9 million infinity-edge pool, which opened in July 2009, seems to roll out into Wailea Bay 53 feet below, while underwater speakers play contemporary Hawaiian tunes. Open only to guests who are 21 plus, this 120-foot-long saltwater pool has four inlets that perpetually bubble, and its swim-up bar delivers thirst-quenching treats like vodka mojitos. In the early evening, the glass mosaic tiles on the bottom of the pool glitter in the flames cast by surrounding fire bowls and tiki torches.

Hotel:Hotel du Cap-Eden-Roc, Cap d'Antibes, France
Why It's Cool: When this hotel reopened in April 2011 on the Côte d'Azur after a $64 million renovation, it unveiled a new, guest-only outdoor pool, which had been dynamited out of the adjacent cliff face. From their perch here, 13 feet above the Mediterranean, guests swim in seawater heated to a temperate 82°F, and have a perfect view over the infinity edge of fellow visitors tying their yachts off on the hotel’s private landing stage.  If for some reason one tires of ordering poolside cocktails from the two roving attendants, a nearby set of trapezes hangs over the sea (near the ocean-diving boards, of course) for an adventurous dip in the Med.

Hotel:Amangiri, Canyon Point, Utah
Why It's Cool: Amangiri, in Sanskrit, means "peaceful mountain"—and the most peaceful of those found here may be the 80-foot-high, Jurassic-period sandstone escarpment that rises from the middle of the resort’s U-shaped pool. Guests can take in panoramic views of Utah's dramatic mesas from either the 84-degree water or one of the surrounding lounges and king-size daybeds. Order a prickly-pear margarita to enhance the desert flavor during the day, or test the tranquil waters anytime of night you please: The pool is open 24 hours.

Hotel:Qasr Al Sarab, Abu Dhabi
Why It's Cool: No, it's not a mirage. The Qasr Al Sarab resort, which opened in November 2009, materializes in the middle of the tall, curling dunes of the Liwa Desert. It's a spectacular backdrop for the resort's amoeba-shaped pool that rivals a football field in sheer size. Guests often stand in the shallow end of the curvy oasis, next to the bar, and observe the pool butlers bringing cold towels, iced fruit popsicles, and other treats to sun-worshippers on the 140 chaise lounges that line the sandstone patio. During the day, the pool is kept at a refreshing 70°F. Linger until 9 p.m., when lights glimmer along the pool's edges and the stars come out over the date-palm trees.

Hotel:Park Hyatt Tokyo
Why It's Cool: Sure, Bill Murray took a dip here in Lost in Translation, but it's the view from this sleek, 47th-floor swimming pool that's truly remarkable: Floor-to-ceiling windows frame jaw-dropping vistas of Tokyo, and even venerable Mount Fuji, while the steel-and-glass pyramid-shaped ceiling floods the pool with natural light. The 65-foot-long, four-lane pool is striking at night, too, when the city's skyscrapers light up.

Hotel:San Alfonso del Mar, Algarrobo, Chile
Why It's Cool: You can take small sailboats out on this saltwater pool that Guinness World Records calls the largest in the world. At two-thirds of a mile in length, the massive stretch of water has room for several man-made sand beaches. For nighttime swimming, head to the temperature-controlled beach inside the pool's centrally located glass pyramid—the water and the sand are heated.

Hotel:Hotel Caruso Belvedere, Ravello, Italy
Why It's Cool: The Hotel Caruso Belvedere is set at the highest point in the sun-splashed Amalfi Coast town of Ravello, so the open-air infinity pool offers unobstructed, panoramic views of one of the world's most dramatic coastlines—and the sea beyond. It doesn't hurt that the pool itself is flanked by 11th-century Roman ruins.

Hotel:Umaid Bhawan Palace, Jodhpur, India
Why It's Cool: In a massive, 347-room palace overlooking the Blue City of Jodhpur in the Indian state of Rajasthan, this serene, temperature-controlled swimming basin takes advantage of natural candlelight—with rose petals sometimes strewn on the surface. The hotel is run by the Taj Hotels Resorts and Palaces, which shares the property with the palace's owner, the Maharaja of Jodhpur—who has been known to swim laps with the guests from time to time.

Hotel:Viceroy Miami
Why It's Cool: In a city loaded with cool pools, the pool at the Viceroy stands out. The two-acre pool deck—with Japanese blueberry trees and swanky chaise lounges and beds—features three types of pools: an 80-person hot tub, a wading pool, and a football-field-size swimming pool. Perhaps coolest of all, it's 15 floors above the street, with sweeping views of downtown Miami and glimpses of Biscayne Bay in the distance.

Hotel:InterContinental Hong Kong
Why It's Cool: Set on the third floor of the InterContinental Hong Kong, the hotel's three pools—two hot and one cold, but all with underwater music piped in—give the almost unnerving illusion that you're floating in Victoria Harbor. After your swim, park yourself in one of the poolside cabanas and gaze out at Hong Kong's skyline.

Hotel:Golden Nugget, Las Vegas
Why It's Cool: You'll swim with five species of sharks (16 sharks in all) at the Nugget's $30 million pool complex. The Tank, as it's called, houses a three-story waterslide, waterfalls, and the pool's pièce de resistance, the 200,000-gallon shark tank. You're in more danger at the Golden Nugget's roulette wheel: The sharks, stingrays, massive Queensland grouper, and silvery jack crevalle are separated from the swimming pool by a six-inch clear acrylic wall.

Hotel:Quincy Hotel, Singapore
Why It's Cool: This glass-enclosed pool is cantilevered from the 12th floor of the futuristic-looking Quincy Hotel, suspending swimmers high above the passing cars and pedestrians at street level. At night, special lighting effects make the pool appear to glow. Bask and swim for a bit, then retire to one of the rattan chairs at poolside for a nap.

Hotel:Al Bustan Palace InterContinental Muscat, Muscat, Oman
Why It's Cool: After an extensive 18-month renovation, this InterContinental property in Oman reopened with a major pool upgrade—which the roving pool butlers (you heard us) are more than happy to tell you about, after refreshing your rose-scented spritzer. The spacious, 164-foot-long infinity pool is flanked by shady, palm-studded islands. The water is temperature controlled, so it's always an oasis-like 84 degrees.

Hotel:Anantara Bophut Resort & Spa, Koh Samui, Thailand
Why It's Cool: You look straight out into the Gulf of Thailand from the 98-foot-long infinity pool at this stylish resort on the island of Samui, Thailand. If the views aren't soothing enough, order a stiff drink at the swim-up bar and laugh it off with the comical, spitting monkey statues along the pool's perimeter.